Back to homepage »
Share:
Following a hard training the members of the 3rd Croatian Autonomous Vessel Protection Detachment (AVPD) showcased their capabilities in the Exercise “Ugor 18“, conducted in the Barracks "Admiral of the Fleet Sveto Letica Barba" in Split 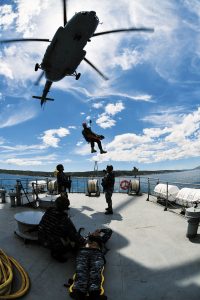 For almost two decades members of the Croatian Armed Forces have been a credible and responsible partner in international missions and operations; as of early September the third Croatian  AVPD team is to join the EU NAFOR SOMALIA – OPERATION ATALANTA. The  12 members of the Detachment trained hard to prepare for the Operation, and  showcased their capabilities in the Exercise “Ugor 18“, conducted in the Barracks “Admiral of the Fleet Sveto Letica Barba” in Split and in the central Adriatic aquatorium, monitored by an Evaluator Team of the General Staff of the Croatian Armed Forces.. During the 9-week training they practiced the use of pistol and automatic rifle, Browning and sniper rifle (static and in movement), in low visibility conditions and in various possible environments found in aboard a vessel, at open sea or in ports of Africa. They also practiced the administering of first aid, and familiarised with the area of operations in ATALANTA.

“The strength of togetherness, fighting and victorious spirit was evident throughout the time. All members gave full contribution, regardless of their candidat status“, said Captain (N) Željko Kusić, the Head of the Evaluator Team. The exercise scenario featured a number of possible situations  expected during the mission: the procedures undertaken on arriving to the military base in Somalia, the handover of the vessel. equipment and weapons in the base, the loading of the containers aboard, incidents in the port, equipment and armaments in the base, the delivery and getting acquainted with the cargo ship, boarding the ship’s container and equipment, incident in the port, attack by pirates in fast rubber boats, medical assistance and helicopter evacuation of the wounded, rescue of the person from the sea, fire aboard the vessel, day- and night time shooting, the fast evacuation from the vessel and firing small weapons from the vessel. The preparations were intensive and lasted for nine weeks. The Detachment is composed of 12 members – three officers, commander, deputy commander and a physician and nine NCOs.  The commanders and the deputy commanders of all three teams belong to the Croatian Navy specialist forces.

It is manned by experienced and young members; some needed refreshment training and some had to start from the basics. During the training the members of the previous two detachments passed their own experiences and lessons learned, particularly for the situations they had not been prepared for.  “The operation plan envisions one course of events, the situation in Somalia is quite different; there you have to have the appearance and authority of a soldier and skills of a psychologist and teacher, to be able to act the right way with different persons. The mission is quite complex in terms both of task implementation and of the timing of the reaction against potential terrorists“, says the AVPD Commandercond and Third Teams and their deputies were otherwise members of the Naval Disarmament Unit of the Croatian Navy. The Detachment demonstrated its capability of responding to incidents in the Operation ATALANTA “protecting“ the “Andrija Mohorovičić“Training Vessel from the attacks by pirates in rubber crafts. During the navigation the Detachment is divided into two groups securing the vessel, and can only use the weapons after leaving territorial waters of Somalia 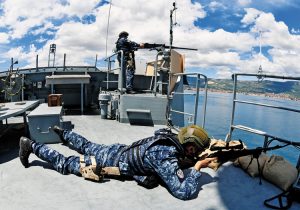 On seeing a boat approaching the vessel  its crew is warned three times that the vessel they are heading towards is protected ;if the crew (most frequently aboard a fast rubber boat) ignores it, a warning shot is fired, followed by a shot into the boat engine. The scenario then features an exchange of fire between the AVPD and the pirates, and heavy wounding of the Detachment Commander. The physician examines him, provides medical assistance and reports to the deputy commander on his condition and calls in MEDEVAC. The helicopter arrives and the commander is evacuated. The head of the evaluation team confirms the Exercise succesfully completed. According to the leader of the assessment team exercise, it has been successfully implemented.

“The Croatian team is well equipped, trained, prepared and autonomous to take duty in the Operation EUNAVFOR ATALANTA to protect and secure the World Food Programme’s vessels should pirat groups be spotted at open sea and in territorial waters  and in the ports of the coastal states“, said the Head of the Evaluation Team. Lt. Col.  Ante Jažić, a medical doctor and a member of the 3rd AVPD team said: “Today we have trained in MEDEVAC of the wounded from the vessel. Following the medical check we called the helicopter in. I serve both as a member of the crew tasked with vessel protection, carryng arms, and as a physician on duty“.