Back to homepage »
Share:
“With this activity, we first and foremost manifest solidarity towards a friendly country as well as traits unique to Croats: our gallantry, our sensitivity and our readiness to provide help to those in need. Be proud and dignified ambassadors of Croatia in an international environment,” Defence Minister Damir Krstičević said 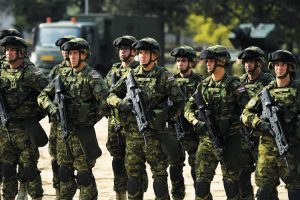 The 3rd Croatian Contingent to NATO activity Enhanced Forward Presence (eFP) was formally sent off in Barracks “Benkovac” in Benkovac on 18th October 2018. The ceremony was attended by the Envoy of the President of the Republic of Croatia and the Commander-in-Chief of the Croatian Armed Forces, Deputy Prime Minister and Defence Minister Damir Krstičević along with his associates, Deputy Chief of the CAF General Staff Lieutenant General Drago Matanović, the Commander of the Guards Mechanised Brigade Brigadier General Tihomir Kundid, the Defence Attaché of the United States Colonel Robert Mathers and the Defence Attaché of the Republic of Poland Colonel Tomasz Gora, along with the representatives of Zadar County. 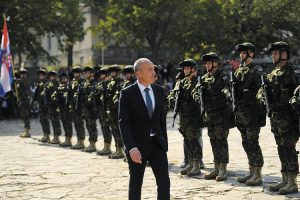 Speaking on behalf of the President of the Republic of Croatia, Defence Minister Damir Krstičević pointed out that working alongside strategic and key allies – the United States of America, the United Kingdom and Romania – added value to the victorious Croatian Army’s participation in NATO activity Enhanced Forward Presence. “The Republic of Poland is our friendly and partner country. We share the same values as the Polish people, who stood by our side in times of great hardships. I am glad that we can contribute to the safety of a friendly nation as well as our overall safety with our participation,” Minister Krstičević said. He also recalled how the successfully conducted exercise “Velebit 18 – Joint Force” had proved that the Croatian Army ranked among the world’s best militaries. He further stated that it was up to each individual how much effort they would invest in making the most of the given opportunity for themselves, their unit and the whole system. “With this activity, we first and foremost manifest solidarity towards a friendly country as well as traits unique to Croats: our gallantry, our sensitivity and our readiness to provide help those in need. Be proud and dignified ambassadors of Croatia in an international environment,” the Defence Minister concluded. 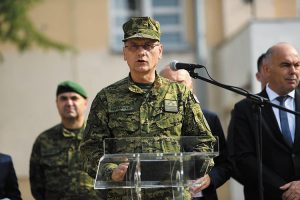 General Matanović pointed out that NATO’s activity Enhanced Forward Presence confirmed and manifested the unity of NATO member countries as well as their strong transatlantic bond. “Croatian Army has once again proven that it belongs to a community of professional and trained militaries whose support citizens, allies and partners can always count on. I use this opportunity to thank your families for supporting your noble decision to participate in an international peace support activity,” General Matanović said.

General Kundid called on the members of the Contingent to promote true values of Croatian soldiers with their participation. “You possess respectable knowledge and experience which enable you to fulfil any task assigned to you. Continue to be recognizable for your excellency,” General Kundid said.

U.S. Military Attaché Colonel Mathers voiced his satisfaction with the fact that the Croatian Army would participate in yet another mission in the Republic of Poland and that American soldiers would have an opportunity to learn from their Croatian colleagues. 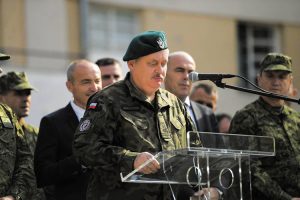 The Military Attaché of the Republic of Poland Colonel Tomasz Gora agreed with Mathers’ words. He also used the opportunity to remind that Croatia had proven itself to be an excellent ally to the Republic of Croatia countless times, which made him look forward to a continued co-operation between Polish and Croatian militaries.

The Commander of the 3rd Croatian Contingent Captain Željko Trček said that training for the mission had not been easy, but that the results of the training had revealed Croatian soldiers’ high level of readiness, excellence and professionalism. “I am particularly proud of the fact that there are men in the Contingent who have experience from the Homeland War and who selflessly share that experience with their fellow soldiers,” Trček said. Friar Ilija Mikulić concelebrated a mass ahead of the 3rd Croatian Contingent’s departure.