Back to homepage »
Share:
The 2nd phase of the field training and evaluation of operational capabilities of the components of the 8th HRVCON to Resolute Support Mission in Afghanistan closed on 7 February 2018. 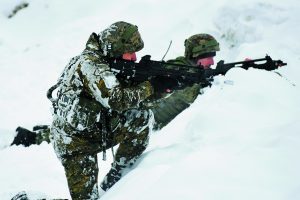 The 2nd phase of the field training and evaluation of operational capabilities of the  components of the 8th HRVCON to Resolute Support Mission in  Afghanistan closed on 7 February 2018. The Contingent is composed of 106 members, 94 to operate under the Resolute Support Command, and 12 under national command. They will be assigned with force protection, advisory and mentoring as well as with staff duties as non-combat multinational stabilisation unit.  The international field exercise  “Mir 18/1“ was conducted from 5- 9 February 2018. The week prior to the Exercise the members of the  8th HRVCON took integration training, to prepare for the final evaluation. Within the U.S.-Adriatic Charter among the participants in the Exercise were 23 members of the Army of Montenegro (two members as evaluators), two members the Albanian Armed Forces and two members of the Armed Forces of Bosnia and Herzegovina;. The Commander of the Guards Arnoured Mechanised Brigade of the Croatian Arm,y Brigadier General Denis Tretinjak was assigned Officer Scheduling the Exercise : “The present conditions, with 30-cm snow, were profitted from to prepare to similar conditions in Afghanistan, particularly in the early deployment phase.. The Command of the 2nd Platoon of the Force Protection Coy,  1st Lieutenant Dino Paljević, artillery specialist, is performing the duty well. The grouo is an optimal combinations of youth and experience“. The components demonstrated to be able to fulfill the assigned tasks. The national CREVAL teams of the Croatian Army (composed also of the evaluators of  the Military Police Regiment, the Support Command and the Special Forces Command, evaluated the individual members and components “combat ready“ for the engagement in the Resolute Support Mission. 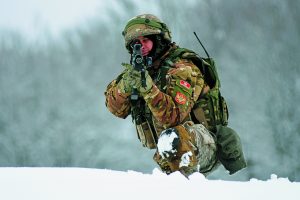 The Director of the Evaluation, Colonel Davor Fanton said the training cycle was focussed on the role of guardian angels; the incidents occuring in the area of operations prompted new procedures and evaluation lists. Relevant training and preparations has to be tailored to  the actual conditions in the area of operations that the  members of the Contingent have to be familiarised with during the pre-deployment training to be able to act efficiently .. The Commander of the 8th HRVCON, Colonel Branko Tubić confirms that all components have been trained and prepared to do their tasks within Resolute Support Mission. “The six-month engagement of the kind in a remote setting is always a challenge. With my  26-year career and experience in leading various units of the Croatian Armed Forces, commanding the Contingent is a great honour and responsibility“, said Colonel Tubić. In addition to the home training, the staff personnel and the advisory teams took trainings during the deployment: at NATO Joint Force Training Centre in Bydgoszcz, Poland, where they prepared for the assigned  duties  within the Train Advise Assist Command North – TAAC-N).