Back to homepage »
Share:
In order to detect and register the impact of the recent earthquake that hit Zagreb and its surrounding  the Croatian Armed Forces have provided the aerial shooting capability using the UAV and ground penetrating radar. 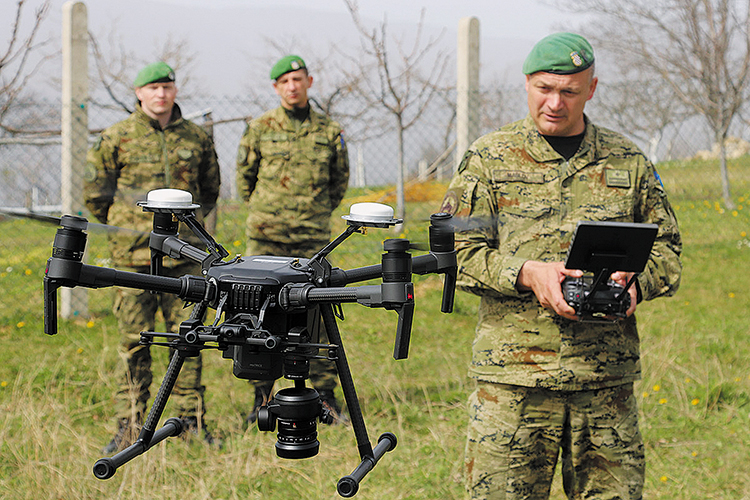 Aerial filming with an unmanned aerial system is another capability provided by the Croatian Armed Forces to the civilian community to map  and repair  the earthquake-hit area.  Given that the earthquake hit the populated zones, it was crucial for the first five days to record facilities that had suffered significant damage in order to assist in assessing and eliminating potential hazards to citizens as soon as possible…

In order to detect and register the impact of the recent earthquake that hit Zagreb and its surrounding  the Croatian Armed Forces have provided the aerial shooting capability using the UAV and ground penetrating radar.  The shooting was conducted by the members of the Military Intelligence Company of the Guards Armoured Mechanised Brigade, commanded  by Major Mario Maslov. They filmed the locations for up to 15 hours daily,  and Major Maslov explained the shooting modality and how important the systems were for the rehabilitation of the zones affected by the earthquake.

The Military Intelligence Company has been tasked with shooting the locations hit by the earthquake. What locations were shot and for what purpose?

Aerial filming with an UAV is an additional capability provided by the Croatian Armed Forces for the benefit of the community, to map and repair the locations hit by the earthquake. We were shooting around Zagreb and the immediate surroundings affected by the earthquake, as well as the area of the Medvednica Mountain and of Hrvatsko Zagorje.

Given that the earthquake affected the populated area, it was necessary to film all buildings in Zagreb, particularly the damaged ones to enable a quick estimate and removal of the dangerous debris.  For the record – the damage inflicted on the roofs, chimneys, masonry walls  etc are not visible from the ground perspective.  The aerial shooting we executed discovered the blocks not visible from the ground. Through aerial mapping we detected the masonry chunks that fell off or threatened the residents and passers-by from the roof edges.

Pursuant to the Decision of the Deputy Prime Minister and Defence  Minister and to the order of the  Chief of the General Staff, 10 members of the Guards Armoured Mechanised Brigade Intelligence Company were engaged in the aerial filming in the field, working for 15 hours a day.

Aerial filming is just half-way. All recorded footage – more than 200 GB material – is to be reviewed and analysed by the Intelligence Regiment in cooperation with the Military Intelligence Company of the Guards Armoured Mechanised Brigade , in accordance with the guidelines from the G2 Department  of the Croatian Army and the J2 Division of the General Staff of the Croatian Armed Forces.  Once analysed, the footage  is delivered to the responsible services and institutions to be used for quick and precise building condition assessment.

In addition to aerial filming with multi-rotor UAVs, three locations were also surveyed by GeoRadar.

What was the GeoRadar used for?

Georadar filming is a new  capability of the Croatian Armed Forces, which provides imagery on subsurface condition and identifies possible natural or man-made anomalies (holes, major differences in soil structure, infrastructure  parts and the like.

In this particular case we filmed the Medvedski breg and Slani Potok locations to detect possible subsurface anomalies close to the housing buildings. The footage was handed over to the expert services and to the community, as a reference for location of potential hazards.

The Military Intelligence Company has  solid experience in operating GeoRadar, which is applied in search of the missing persons managed by the Directorate for the Detained and Missing  pursuant to the Agreement signed by the Ministry of the Croatian Homeland War Veterans and the Ministry of Defence.

Which areas were filmed?

We filmed the areas and  building hit by the earthquake in Zagreb, parts of Donja Stubica and Gornja Stubica, and Slani Potok in the Municipality of Gornja Stubica.