Back to homepage »
Share:
The heaviest enemy land, sea and air offensive on the small unoccupied part of Dubrovnik was launched on St Nicholas ' Feast (6 December 1991) 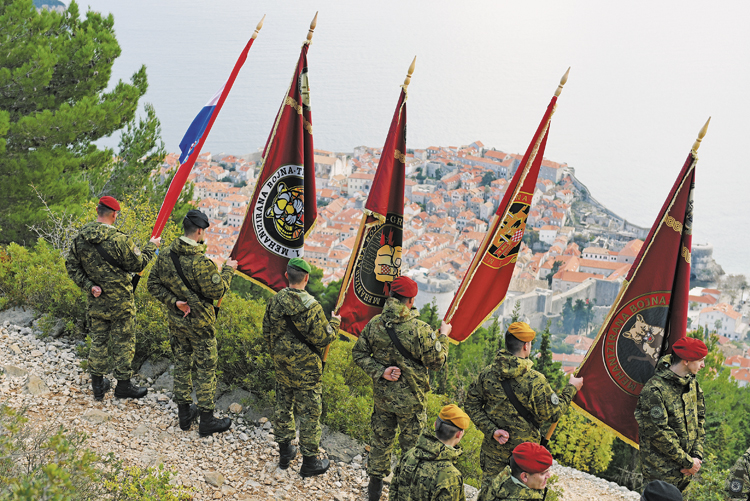 The heaviest enemy land, sea and air offensive on the small unoccupied part of Dubrovnik was launched on St Nicholas ‘ Feast (6 December 1991), with 600 shells fired on the historical centre of the town, destroying 456 buildings and leaving nine in flames  in the heart of the town. The famous Stradun Street was hit by 45 shells, and numerous cultural monuments were not spared either.

The magnificent walls of Dubrovnik, a city of rich history and a champion of tourism in Croatia also provide the tragic reminders of the Homeland War. In early October 1991  enemy forces launched attacks that stretched throughout the south, from the hinterlands at Čepikuće and Slano to Dubrovnik and Konavle, aimed at seizing the entire coastal part around Dubrovnik. The town was completely surrounded at land and sea. During October the JNA forces and Montenegrin reservists occupied the area of ​​Konavle and of the Dubrovnik Littoral Area, leaving only a 12-km2 area free, with 60,000 residents and refugees. In November and December 1991 Dubrovnik suffered the hardest days of its history.

The entire area under occupation of Montenegrin reservists was looted and burned down and the population was expelled. The enemy did not seize Dubrovnik however, although it was exposed to shelling and destruction in spite of the protests by the international community.  Dubrovnik remained in blockade for seven months and 21 days – until 26 June 1992, when the 1st Guards Brigade “Tigrovi“ ended it.

The defenders came from all over Croatia to defend Dubrovnik and to end blockade and liberate Konavle and other occupied areas.

The city was successfully defended in Mount Srđ, near the Belvedere Hotel, at Sustjepan and other positions that day through the enormous efforts by brave defenders of Dubrovnik. The defenders halted the enemy advancing in the area, which was a turning point in the war,  followed by the actions liberating the southernmost part of Croatia. Dubrovnik was defended by 163 defenders, later honoured in the title of the Dubrovnik Brigade – the 163rd  Brigade of the Croatian Army.

Throughout the occupation of Dubrovnik more than 33,000 people left the area. The war actions took the lives of 184 veterans and 92 civilians and left more than 1,500 wounded. As many as 2,127 houses were burned, leaving  8,000 homeless people in the aggression, and the area was looted.

In memory of their heroism and sacrifice a 8-day Dubrovnik Defenders’s Day commemorative programme was held in Dubrovnik.

The ceremony comprised the unveiling of the street table with the name of Staff General Janko Bobetko – one of the most meritorious figures for the freedom of Croatia and of its south part – by the Mayor of Dubrovnik Mato Franković and General Bobetko’s son Ivan.

On 5 December members of the Croatian Armed Forces walked the Way of the Cross to Mount Srđ, led by Police Chaplain Fr. Ivo Kramar, and the film “3069” by Jakov Sedlar was shown in the Cinema “Sloboda“.

The main ceremony commenced with paying of respects at the Boninovo Cemetery by the Deputy Prime Minister and Defence Minister Damir Krstičević, by the Chief of General Staff of the Croatian Armed Forces General Mirko Šundov, by Deputy Chief of the General Staff Lieutenant General Drago Matanovic, representatives of the local government and associations from the Homeland War  and by the families of the fallen defenders, accompanied by the members of the Honorary Battalion. The delegation also paid respects at the Muslim cemetery at Boninovo and at the memorial monument to the fallen members of the Police.

The delegations headed by the President of the Republic as the Supreme Commander of the Croatian Armed Forces Kolinda Grabar-Kitarović laid wreaths at the Cross on Mount Srđ, where the Prayer of  Absolution for the fallen veterans was recited by Rev. Marin Lučić. The ceremony featured a performance of a recital by a group of elementary school pupuls and a performance by the Vocal Ensemble “Ragusa“ in the amphitheatre of the Fort Imperial on Mount Srđ.

In the Old Port of Dubrovnik the participants laid a wreath at sea to commemorate the seamen and the fallen defenders with the wreath laying at sea.

“We are paying a solemn tribute to Staff General Janko Bobetko, by naming this street in Dubrovnik after him. Despite his senior years he volunteered with youthful enthousiasm to defend his homeland and led much younger defenders to victory in a number of battles“, said President Grabar-Kitarović who also stressed that the imposing walls of Dubrovnik showed the struggle for freedom till death.

“General Janko Bobetko is the father of the modern Croatian Armed Forces, the Commander of the Southern Battlefield, one of the key generals who won us freedom,” said Minister Krstičević praising the naming of the street in honour to the legendary general.

“The sacrifice of all fallen Croatian defenders, Croatian warriors and heroes must never be forgotten because they gave their lives for the free and independent Republic of Croatia. General Janko Bobetko occupies a highly  prominent place among the great figures meritorious for the freedom of libertarian Dubrovnik.

The ceremony of unveiling the plaque of a street named after Staff General Bobetko  was graced with a performance by the Orchestra of the Croatian Armed Forces, a column bearing the flags of the units engaged in the defence of Dubrovnik, units of the Croatian Armed Forces and of the Ministry of the Interior, the Croatian Navy Vocal Ensemble ”Sv. Juraj ”and the  Dubrovački Trombunjeri Historical Military Unit. It was followed by a march by the units from the Homeland War from the General Bobetko Street through the famous Stradun Street to Ploče.

At the cemetery at Sustjepan the delegation of the Croatian Armed  Forces paid respects to the fallen defenders, and masses for the fallen veterans of war and civilian victims of the Homeland War were recited  in the Dubrovnik Cathedral and in the church of St. Nicholas.