Back to homepage »
Share:
The Artillery Branch Day and the Artillery and Missile Regiment of the Croatian Army the 10th anniversary of its establishment and St Barbara Day (the patron saint of artillerymen) were marked formally in the Barracks “Bilogora” in Bjelovar, housing the Command of the Regiment and […] 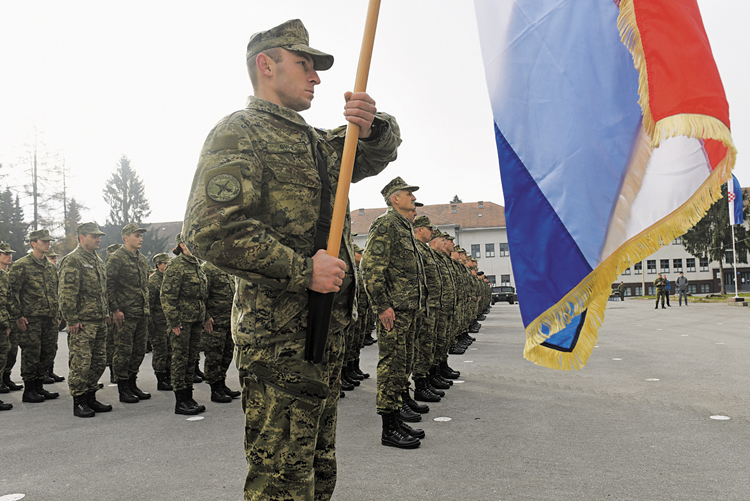 The Artillery Branch Day and the Artillery and Missile Regiment of the Croatian Army the 10th anniversary of its establishment and St Barbara Day (the patron saint of artillerymen) were marked formally in the Barracks “Bilogora” in Bjelovar, housing the Command of the Regiment and the Artillery and Missile Battalion of the Guards Mechanised Brigade on 4 December 2017.
The Artillery and Missile Regiment is responsible for the artillery specialist and functional training, conducts the exercises with the TBG in the Training Range “Eugen Kvaternik“ , provides support to the officer, NCO and cadet education, as well as to the training of the CAF reserve component.
The ceremony was attended by the Commander of the Croatian Army, Lieutenant General Mate Ostović, the Military Ordinary Mons. Jure Bogdan, the Commander of the Training and Doctrine Command “Fran Krsto Frankopan”, Col. Željko Šikić, the commanders of the Army’s units and other visitors and the families of the fallen members, the representatives of the local authorities (the Town of Bjelovar and the Bjelovar-Bilogora County), of the Ministry of the Interior and former members and commanders of the 15th Anti-armour Artillery and Missile Brigade and of the 16th Artilery and Missile Brigade. 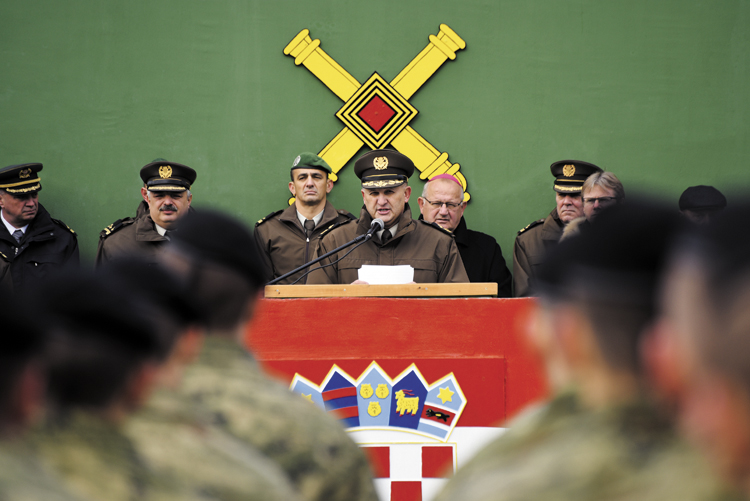 The Commander of the Artillery and Missile Regiment, Colonel Marijan Cikuš reminded of its inception from two former artillery units (the 15th Artillery and Missile Brigade and the 16th Artillery and Missile Brigade), which took on the role of training and instructing conscripts in the artillery area along its combat role. The Regiment holds a prominent place within the Croatian Armed Forces, with high-level trainedness and improving equippedness. The Commander enumerated the many activities of the Regiment – the administration of courses and specialist training events, the preparation and equiopment of the MRL Battery for NATO eFP along with the basic tasks and assignments.
Having extended the congratulations from the Chief of the General Staff, the Commander of the Croatian Army, Lt. Gen. Mate Ostović underlined the developed capabilities of the artillery units to conduct a wide range of tasks, and particularly the Artillery and Missile Regiment, which in the course of 2017 has integrated the PzH 2000 and prepared and deployed a self-propelled MRL battery to NATO eFP Mission in the Republic of Poland, contributing to the European security and stability. Lt. Gen.Ostović also underlined the prospective exercise “Vatreni zid“ (“Firewall“), to demonstrate the newly acquired artillery capabilities, including the joint fire support.
The meriting members of the Regiment and of the Battalion were presented with awards for the outstanding service , and a static display was organised for the visitors during the Barracks’s Open Day.