Back to homepage »
Share:
The 12th generation of cadets, enrolled in the new military study programmes a year ago took the Summer Camp II  from 6-17 July. Having completed the academic obligations and passed the required  the cadets spent two summer tweeks in the Gakovo Training AreaThe Summer Camp […] 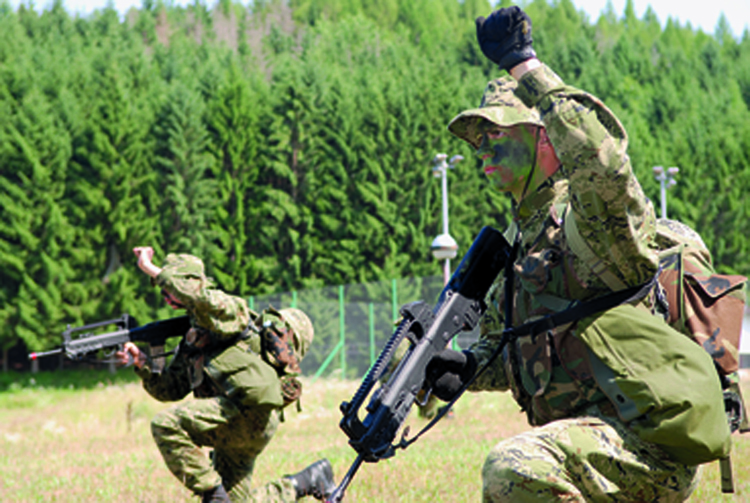 The 12th generation of cadets, enrolled in the new military study programmes a year ago took the Summer Camp II  from 6-17 July. Having completed the academic obligations and passed the required  the cadets spent two summer tweeks in the Gakovo Training Area
The Summer Camp opens the second academic year for the cadets and is an important step forward in their military training. Prior to the Camp the cadets were familiarised with the basics of military skills and regime. Only upon mastering the weapon handle and disassembly, crawling, shelter digging and camouflage are they allowed to take other subjects. The two-week Summer Camp comprised the four main curricula – tactics, infantry weapons and shooting, topography and camping,
1st Lieutenant Tomislav Vučak, the Commander of the 2nd Company of the Cadet Battalion informs us that the training in the first year is conducted at the individual (enlisted) soldier level and in the second year at the team/squad level respectively. The Summer Camp II focusses on tactics and comprises mission preparation, contact, reacting to contact, crossing dangerous areas, attack, ambush, patrolling and reconnaissance. The cadets are also required to complete the infantry weapon familiarisation including the shooting practice. They were first instructed on weapons and took shooting practice in their first year, and now upgraded their skills with some advanced tasks, such as the transition from pistols to rifles, tactical replacement of ammunition boxes and urban warfare.
The cadet training curriculum entails incremental progression in task complexity, and the same applies to the Camp. Constant presence and the expertise of their instructors is essential and their experience and patience helps them in hard moments. The instructors for their part commend the cadets’ motivation and the will to learn. Sergeant Major of the Army, Tihomir Klasnić, Senior Instructor of the 4th Cadet Company, was responsible for the tactical module of the Summer Camp.“The Camp placed the cadets in various challenges, aggravated by increased physical efforts. Despite the weather conditions and exhaustion, the cadets invested high efforts to fulfill the assigned tasks,and expanded their knowledge outside the compulsory curriculum and time. The cadets’ motivation is impressive and encouraging. They motivate the instructors in return to do our best as well“, says SMA Klasnić.
The Cadet Military Training Concept is the frame document stipulates cadets take a total of four camps during their four-year education period. Each of the camps comprises three segments: the summer camp, the winter camp and the training during the academic year, to fulfill the compulsory 400 training hours per cadet annually. The contractual obligations of cadets towards the University of Zagreb and the Croatian Defence Academy define the academic and military training standards as well. The overall scores comprise the academic achievement and the military training performance and determine the enrollment into the next academic year.  Satisfactory performance in the camps during the academic year is mandatory, and underperformance can lead to annulment of the contract.