Back to homepage »
Share:
“The MEDAD and Chief JMED is the highest international post for a medical officer of the Croatian Armed Forces in the operations to date: it is a major honour and responsibility” 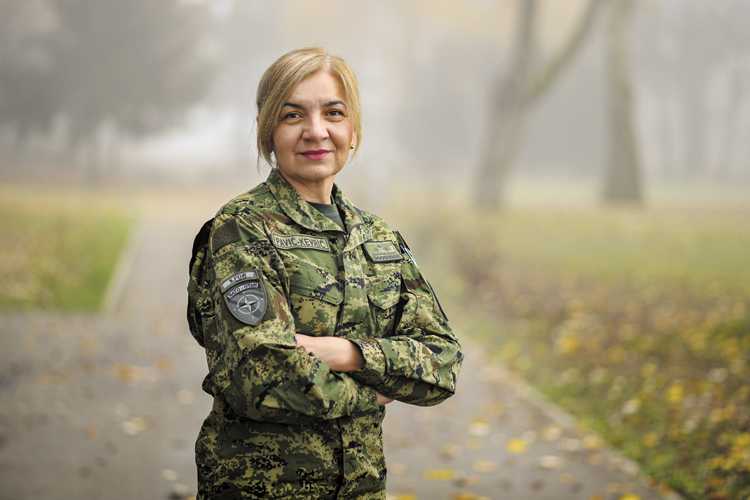 Colonel Ružica Pavić-Kevrić, Deputy Commander of the Military Medical Centre of the Support Command has been assigned as MEDAD to the KFOR Commander and Chief JMED in the KFOR Command. In the interview for the “Hrvatski vojnik” magazine she explained the duties and her expectations from the term served in KFOR.

You have been assigned to a high-level and responsible post in KFOR Mission within the 34th HRVCON. Can you present the two duties in the NATO-led mission for our magazine?

The MEDAD duty pertains to all issues of medical care and health of KFOR members, which is vital for the conduct of the mission. MEDAD is responsible for the quality of medical care and co-ordination of MEDEVAC in the area of operation in accordance with NATO standards. The control over the COVID-19 pandemic in a multinational environment renders the performance of the duty much more complicated. A MEDAD has to have a proved competence to gain the commander’s trust, which is crucial for good cooperation and is for the benefit of all participants of the mission, particularly under the given circumstances.

What is the role of the KFOR MEDAD?

MEDAD is an advisor and directly responsible to the Commander of KFOR, a two-star general on all medical matters related to KFOR. Major General Franco Federici (ITA) is the 25th Commander of the KFOR. MEDAD is responsible for coordination of all plans and policies related to the medical support. In my quality as MEDAD I have direct contact with heads of all departments and units commanders within the Command and with national representatives and contingent commanders. My direct superior in expert matters is MEDAD of the Joint Force Command in Naples, which I regularly report on all medical matters in KFOR.

What are your duties as Chief Joint Medical Division?

As Chief JMED I am in charge of optimal use of medical abilities and capacities in the operation. Chief JMED co-works with national authorities and international civil and NGO humanitarian organisations. In the event of mass casualties and other emergencies necessitation co-ordinated action of all subjects the Chief JMED takes the command of the medical forces. Supervises and coordinates all KFOR medical capabilities, as well as medical evacuation capacities in the area of operation, including ground and air at the tactical and strategic level. 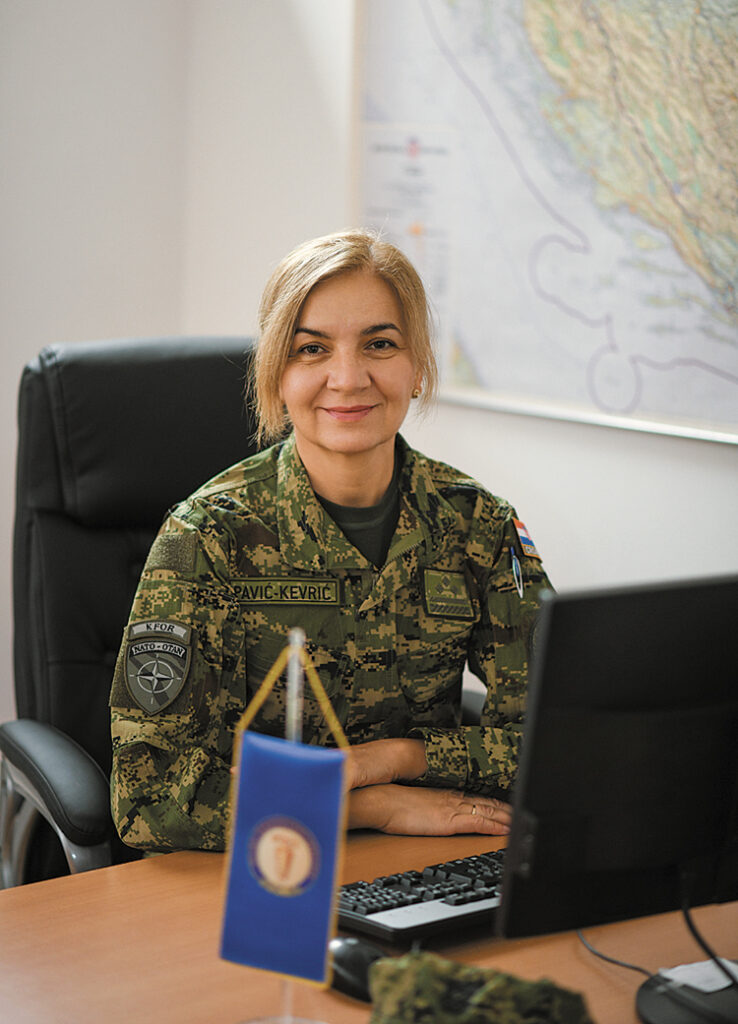 The Chief of JMED oversees the KFOR Command Patient Evacuation Coordination Cell (HQ KFOR PECC) and coordinates and provides guidelines, advice and assistance to the PECC as necessary, in consultation with the Director of the JOC of the KFOR Command.

CJMED also takes care of civil-military health co-ordination, especially regarding the need for medical care in local ROLE-3 civilian health care institutions. As CJMED I am subordinated to the Chief of Staff of KFOR (presently Brigadier General Larry Henry of the U.S. Army. The Medical Division is also manned by an officer and a NCO of the U.S. Air Force, an NCO of the Austrian Armed Forces and an NCO of the German Armed Forces.

Regarding the epidemiological situation and healthcare analytics I rely on NATO’s Force Health Protection Branch, which is a branch of the Centre of Excellence for Military Medicine located in Munich (GER).

What are your expectations from KFOR and how was your pre-deployment training devised?

The MEDAD and Chief JMED is the highest international post for a medical officer of the Croatian Armed Forces in the operations to date: it is a major honour and responsibility. The exercise of the duties in an international setting, in fully respect of national authorities and directing the medical support system towards effective solutions and commander’s intent is a creativity challenge.

Therefore I expect my term in KFOR to expand both my expert and general competences.

I am looking forward to co-working and meeting the personnel from various cultural backgrounds. I have found the formal pre-deployment training and my previous work experience highly relevant. I need to underline the previous duty – the service medical officer in the Military Medical Centre and the present duty of Deputy Commander of the Centre, which provided me with a broader view of organisation of military medical service.

Did you take part in a mission earlier, and did you maybe exercise the duty of the kind or a similar one?

I served in the 18th HRVCON to ISAF, in 2011-2012 as a medical advisor to Afghan forces, which was a very useful experience. Through my professional development as a medical officer I exercised responsible duties in several  large-scale international military exercises, among which the divisional physician in the Exercise “Immediate Response 13”, MEDAD in the Joint Logistic Support Group HQ during the “Trident Joust 15”, the prevention  officer in Joint Logistic Support Group in the Exercise “Joint Derby 16” in Germany, medical officer in the MNSB Command in the Exercise “Saber Strike 17” in Lithuania, where the Croatian Armed Forces were the Lead Nation. I would also like to underline the participation in NATO Medical Exercise EXORG “Vigorous Warrior 17” conducted in Germany and “Vigorous Warrior 19” conducted in Romania, as Medical Evaluator according to MEDEVAL.

What is your role in the projects of NATO’s Military Medicine Centre of Excellence in Budapest, and what is the role of the Centre? Could you single out some projects that you deem important?

I entered the medical officer base of NATO Centre of Excellence for Military Medicine (NATO MILMED COE) after passing NATO licenced Medical Evaluation Course (MEDEVAL) in Ramstein 2015, within the Support Command’s international military cooperation programme. Since then I have lectured in NATO MEDEVAL courses on an annual basis and have been engaged as medical evaluator of medical units prior to the pre-deployment in peace support operations.

The experience from the activities provided me with thorough insight into medical support systems. Only well-organised and effective medical support ensures the execution of the commander’s intent and increases the unit’s combat power.

The Military Medical Centre of the Support Command is hosting a NATO Centre of Excellence’s MEDEVAL Course in 2021.

The Military Medical Centre of the Support Command was planned to organise the MEDEVAL course this year, but we were prevented by the COVID pandemic. We rescheduled it for 2021. It will be an opportunity for more medical personnel to complete NATO’s licenced MEDEVAL Course to train a larger pool of personnel to evaluate forces providing medical support.

It will also be an opportunity to prepare documents, material assets and military medical personnel for development and implementation of the future ROLE -2 facility.

How do you view your new position as KFOR CJMED / MEDAD and also as Deputy Commander of the Military Medical Centre from the gender perspective?

I do not see the gender as a limiting factor, particularly not in my functional area. I see the matter in an affirmative way, in terms of equal opportunities for the development and acquisition of competences, not in terms of contrasting or requesting gender-based privileges. As military medical officer I see both duties positive and encouraging in this regard and I believe I can competently perform both.   My view is that the Croatian Armed Forces do not lack female members capable of exercising any duty. The gender should not be an advantage or disadvantage for any member. The main criteria should be commitment to one’s duty and the achievements.

How do you balance the military service and the family life?

When there is mutual understanding nothing is impossible. It was a bit difficult while the children were small and we relied on the grandparents from Slavonia and Dalmatia. It is far easier now that our sons have grown-up. The fact that my husband is a military physician too may be an alleviating fact and means mutual understanding for the advantages and disadvantages of the military profession. We were separated during the Homeland War and in peace support missions, which we see as simply a part of our service and we cope well with it.

What is your duty in the Croatian Armed Forces and what is your daily schedule like, particularly in 2020 and the COVID-19 pandemic?

For the past two years I have performed the duty of Deputy Commander of the Military Medical Centre of the Support Command. The year 2020 and the COVID-19 pandemic is definitely a challenge for the medical systems worldwide, Croatia included, where the military health system is its integrated part.

At the very onset of the epidemic in Croatia we established co-operation among the key components – the Primary Health Care Department, the Preventative Medical Care Department and the DDD Section of the Veterinarian Department to keep infection under control, primarily among the military personnel, and within a short period we assigned military epidemiologists to the civilian health system. 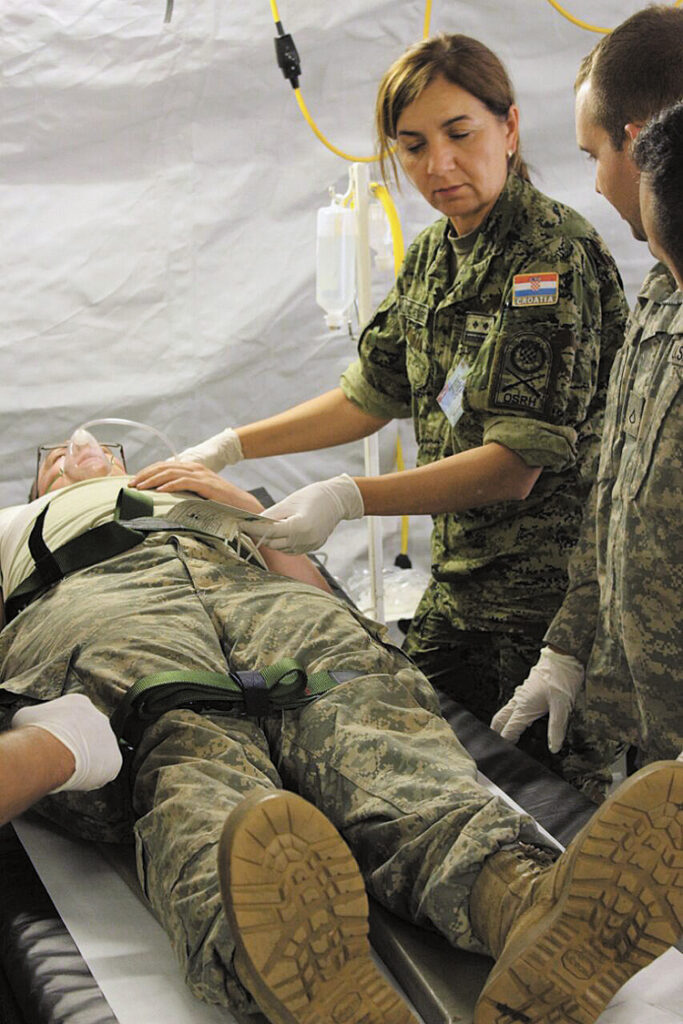 Later on more physicians and nurses and technicians were involved in various activities combating the pandemic. In general, all capacities of the Military Medical Centre have been made available to civilian institutions, in accordance with assessments and arrangements concluded at senior levels. One Medical and Veterinarian Platoon is on stand-by and also two teams composed of three physicians and six nurses/technicians are ready for possible engagement in the COVID Treatment Facility in the Infirmary in the Arena Hall in Zagreb.

We assigned one physician (an epidemiologist) to the Lika – Senj County Institute of Public Health of the Lika- Senj County and two doctors to the “Dr. Andrija Štampar” Institute of Public Health. It is not easy to single out individuals, but a pandemic is a time of enhanced engagement of epidemiologists. While the measures and actions military epidemiologists are primarily focused on the safety of the military personnel at home, they also have an important part in medical care of the members of the Croatian Armed Forces engaged in peace support operations worldwide.

The Croatian Armed Forces have demonstrated solidarity with the society by placing the capacities of the Military Medical Centre in the “Dubrava” Clinical Hospital to serve as a COVID hospital. Other personnel of the Support Command provided huge contribution in the conversion of the facility and pitched tents in front of the hospital.  It should be noted that despite the pandemic and our implied engagement we are doing our best to full maintain the standard health care in the Croatian Armed Forces.

My daily tasks as Deputy Commander of the Military Medical Centre include activities in support of the implementation of the Centre Commander’s intent – command and control of the implementation of all tasks of the Centre and of the orders issued by the senior command. My duty also includes active inter-service co-operation and co-ordination related to the provision of horizontal medical support.