Back to homepage »
Share:
In the joint reception of the personnel and equipment belonging to the air forces of France and the United Kingdom, Croatian pilots Major Vlado Pavlinec and Captain Josip Jurjević contributed to the organization of the Intermediate Staging Base, thus setting the preconditions for the commencement of flying activities 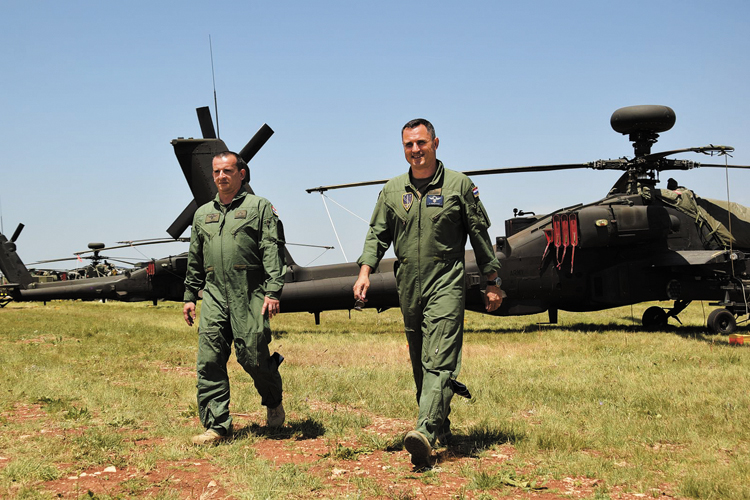 The two pilots co-ordinated activities related to the joint reception of the personnel and equipment belonging to the air forces of France and the United Kingdom. They contributed to the safe and swift organization of the Intermediate Staging Base, thus setting the preconditions for the commencement of flying activities.

Major Pavlinec has been with the Croatian Air Force since 2001 and is a flight instructor on the Bell 206 B helicopter. Previously, he was employed as an expert advisor for the EU-US Open Arms Agreement in the domain of international arms control and as a rotary wing officer in the Croatian Air Force Command’s Operations Department. He also spent four years at Rammstein, Federal Republic of Germany, as a rotary wing / air traffic staff officer at the Allied Air Command (AIRCOM). Since his return to Croatia, he has been filling the post of an exercise staff officer in the Operations Division of the General Staff of the Croatian Armed Forces.

As a representative of the Croatian Armed Forces, Major Pavlinec actively participated in the planning of international military exercise Swift Response 19. He explained that the most challenging part of preparing and conducting the exercise had been the participants’ interoperability, with the emphasis being laid on a safe execution, in line with the regulations of the host country. “As the participating countries are also NATO member states, the level of interoperability has been defined by NATO standards adopted by all of these countries. These standards regulate the training and deployment of forces as well as the planning and execution of this exercise,” Major Pavlinec said.

Speaking of the concerted action of allied forces, Major Pavlinec underlined: “In spite of the high-quality equipment, challenges were not lacking. To everyone’s pleasure, they were resolved quickly, which is one of the objectives of this exercise: to test and advance the concerted action of partner countries’ various components (land forces, air forces, communications, logistics, etc.) in a joint engagement area.” 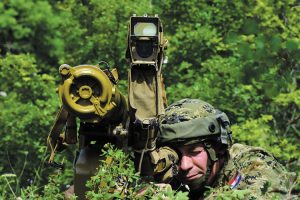 Sharing his impressions of the work done in the exercise so far, Major Pavlinec highlighted the importance of successful and thorough preparation. “Good and timely planning resulted in successful simultaneous reception of personnel in four exercise locations on the territory of the Republic of Croatia (Knin, Slunj, Udbina and Zadar), in spite of the heterogeneousness and numerosity of forces and equipment involved. The reception of forces and the activities currently conducted on the territory of the Republic of Croatia have confirmed the Croatian Armed Forces’ readiness to plan and conduct joint international exercises as well as to actively participate in them on equal footing with other countries. Because of that, I am proud to be a part of the Croatian Armed Forces. I must stress that we were actively supported by the civil authorities of the Republic of Croatia (Ministry of the Interior, Ministry of Tourism, Croatia Control) as well as local communities. Without them, the execution of all activities would not have been as successful or timely as it was,” Major Pavlinec concluded.

Captain Jurjević has been a pilot on Mil Mi-8MTV1 and Mil Mi-171Sh helicopters since 2005. He has made a career for himself in the 91st Air Base’s Multipurpose Helicopter Squadron. He was a part of the Croatian component of the Nordic Battle Group (NBG) and did five tours in Operation KFOR in Kosovo. He is a certified NATO TACEVAL (Tactical Evaluation) air force evaluator and has participated in numerous military exercises in Croatia and abroad.

Talking of new experiences, Captain Jurjević emphasized that he made use of ample experience gained while working with parachutists as a military pilot in an international environment. “I have had a chance to work with Croatian and foreign paratroops. Drops from Croatian helicopters gave me an insight into the procedures involved in parachute landings. I make use of that experience when I have to sustain, enable and meet the requirements for such an operation like large-scale parachute landing,” Captain Jurjević said.

As far as foreign pilots’ impressions of their Croatian peers are concerned, Captain Jurjević underscored: “While working in an international environment and collaborating with pilots from partner countries, our colleagues have formed an impression that Croatian pilots are highly knowledgeable and capable professionals, while the Croatian Armed Forces are professional, committed troops who conduct every task assigned to them responsibly and are willing to lend a helping hand anytime, anywhere.”

Captain Jurjević described what it was like to work in the staff and not be able to fly: “For a pilot, it is a horrible feeling to watch helicopters in the sky and not be able to fly. Being in the air is what pilots love, what they strive for and why they have chosen that their profession. At the same time, we are fully aware of the fact that staff duties are of utmost importance for every operation. The special quality of international military exercise Swift Response 19 is the challenges that may occur during air operations in terms of organization, sustainment, execution or co-ordination. What I will remember most about this exercise is the invaluable experience I have gained sustaining and co-ordinating a large number of helicopters and aircraft during mass parachute landings and helicopter assaults.”

The Croatian Army also play the role of opposing force (OPFOR) in international military exercise Swift Response 19. The Croatian mechanized company in the exercise was comprised of two platoons from the 1st mechanized Battalion Tigrovi (Tigers) and 2nd Mechanized Battalion Gormovi (Thunders) as well as the Strijela – 10CROA1 Missile System Platoon. Equipped with the Air Defence Battalion’s Giraffe radar system and Patria AMV armoured personnel carriers, the company is accommodated at Josip Jović Barracks in Udbina and is to be engaged in combat during air assaults.