Back to homepage »
Share:
The main ceremony marking the 27th anniversary of the Croatian Navy was held in the port of Ploče on 14 September 2018 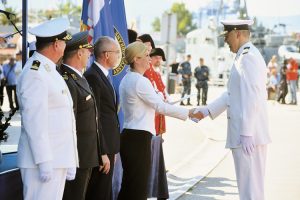 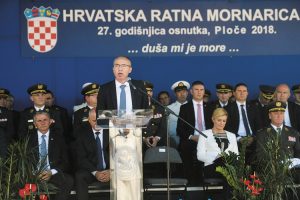 The Defence Minister Damir Krstičević forwarded the congratulations from the Prime Minister and praised the return of the Croatian soldiers to  Ploče, as well as to Sinj and Vukovar, to the  in the barracks named after the legendary 116th Brigade of the Croatian Army. The Minister said that all barracks, training grounds and halls would bear names of  the meriting units and  defenders, in tribute to their patriotism; the Homeland War is the foundation of the Republic of Croatia. In addition, Minister underlined the funds allocated in the defence budget for modernisation of missile boats and other modern assets procured to enhance the capabilities of the Croatian Navy, and that the biggest value was till .the motivated, expert and patriotic personnel. The Minister said that the new Military Maritime Studies, co-organised with the University of Split, was an important segment of  the education of future generations of naval officers, and reminded of the recent send-off of the Missile Boat “Vukovar” to NATO’s maritime support mission “Sea Guardian“ – the first Croatian Navy vessel to take part in a NATO operation, demonstrating the commitment of the Republic of Croatia to joint efforts by the allies to preserve security at sea. It all demonstrates the efforts invested into further development of the Croatian Navy, which has grown into a relevant force capable of responding to any task assigned, said the Minister .

The Minister also stressed the connectedness and synergy between the local community and the Armed Forces in Ploče, citing  the example of the works on the improvement of the town beach . General Mirko Šundov extended congratulations and recalled with piety all fallen, deceased and missing defenders.

General also highlighted the long history and centuries-long tradition of the Croatian Navy, as well as the events from the recent past and the first vessels acquired for the Croatian Navy seized from the Yugoslav Navy from the shipyard Greben in the island of  Korčula. The Croatian Navy conducted many successful and brave actions during the Homeland War, including the battle in the Split Channel of 14 and 15 November 1991, the engagement in all operations conducted along the coastline  and the liberation of the south of Croatia  and the operation “Maslenica“ and the final liberating operations “Lightning“  and  “Storm“, said General Šundov, who underlined the important role of the Naval Infantry Squad  and artillery batteries  during the Operation “Maslenica“. “Croatia can be proud of its maritime  and  shipbuilding tradition  producing frigates, missile boats, patrol vessels submarines, but can primarily be proud of f its people. You are the ones to  continue the famous tradition of their predecessors”, said General Šundov. “Today, when the world is facing new crises, security challenges and risks, the members of the Croatian Navy have acquired new expertise and skills through a system of education and training and successfully oriented to new tasks and new demands”. The Chief of the General Staff also underlined that the engagement of AVPD teams  in the EU-led  Operation Atalanta and in NAVFOR MED Sophia and as of September in NATO’s maritime support operation “Sea Guardian“ demonstrated readiness of seamen to preserve world peace.

The Croatian Navy is nowadays faced with new challenges it will certainly meet, thanks to the skills, expertise and professionalism of its members, said General Šundov. . 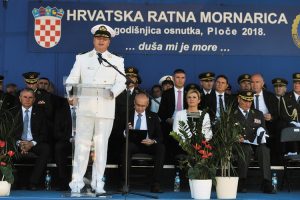 Commodore Ivo Raffanelli extended congratulations to the members of the Croatian Navy, and reminded of the challenging times in 1991, when the Croatian Navy was established, particularly in Ploče and the Neretva valley, where the campaign “Zelena tabla – Male Bare“, seizing the first barracks during the Homeland War with an important quantity of weapons and military equipment. Cdre Raffannelli said the naval and landing units of the Croatian Army supported the forces of the Croatian Army  in liberating operations (“Maslenica“, “Lightning“ and “Storm“  during the actions in Slavonia all until the definite liberation of the Republic of Croatia in 1995. .

“Following the end of the Homeland War, for optimal performance of the tasks assigned the Croatian Navy has been preparing for the future ,missions and tasks, and the education and training system has constantly adapted to new security challenges. Today the Croatian Navy has showcased its excellence in the international peace missions and operations and military exercises worldwide,” said Commodore Raffanelli.

The Commander of the Navy concluded by saying that no achievement would be possible without the personnel , and that the Navy would continue investing into the training, practice and exercises, and that in addition to the military tasks the Navy would remain present in the community, primarily in the security and environment protection campaigns, especially clearing the seabed.