Back to homepage »
Share:
On 29 December 2020, at 12 hours and 19 minutes Petrinja was hit by a devastating earthquake of magnitude 6.2 and a number of aftershocks 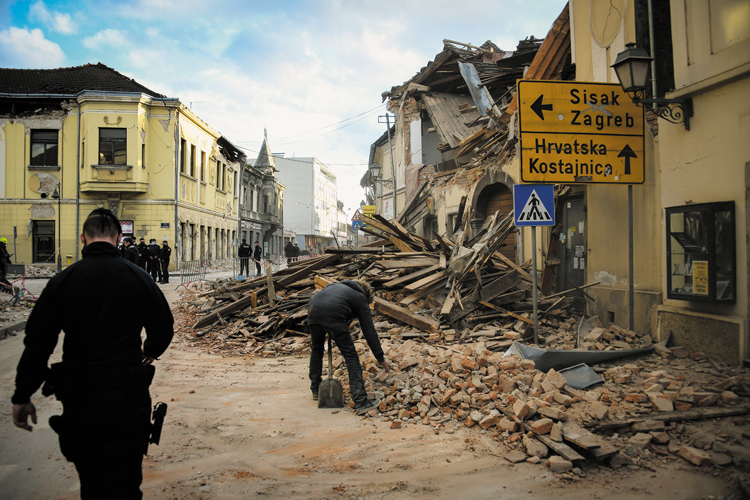 On 29 December 2020, at 12 hours and 19 minutes Petrinja was hit by a devastating earthquake of magnitude 6.2 and a number of aftershocks. In addition to the epicentre zone in ​​Petrinja, Sisak, Glina and the surroundings it was felt across the central Croatia and in the neighbouring countries. He took seven human lives and caused great material damage. It was one of the two strongest earthquakes hitting Croatia since the instrumental measurements. The first to rescue people at that time were members of the Croatian Armed Forces.

Members of the Guards Mechanised Brigade “Tigrovi” and Gromovi”, stationed in the Barracks “Pukovnik Predrag Matanović” in Petrinja, were the first who came to the aid of the residents of Petrinja and the surrounding villages. It took them only twenty minutes after the powerful quake of 29 December to reach the desperate, terrified people, and barely an hour after the quake they were already engaged evacuating the most severely hit people.

The number of members of the Croatian Army engaged in rescue as well as the scope of their tasks grew by the hour. Amidst the hardships the Barracks “Pukovnik Predrag Matanović”, which was modernised and expanded from 2009, became not only the focus of the information, co-ordination and assistance organisation, but also served as a safe haven for the people who needed accommodation having lost their homes to the earthquake.

Within just hours after the earthquake, the forces of the Croatian Army, the Croatian Air Force and the Support Command were dispatched to the spot and a team of the Special Forces Command assisted them with search-and- rescue tasks. 120 members of the Croatian Army with the machinery of the Engineering Regiment cleared the streets and public areas in the centre of Petrinja and removed the rubble of the collapsed buildings, and the Croatian Army dispatched five medical teams with vehicles to the field and provided support in evacuating the residents of the nursing home in Petrinja.

Furthermore, temporary accommodation was provided in the barracks in Petrinja for the hundred people worst hit by the earthquake.

The Croatian Air Force engaged four helicopters and one medical team with a vehicle. Two helicopters from Split transported HGSS members and search dogs to Petrinja, while the other two took off from Lučko and participated in the transfer of patients from Sisak to Zagreb hospitals. Police, fire-fighters, members of the HGSS, emergency services, civil protection, the Red Cross, football clubs fan groups from all over the country, self-organised individuals and associations came together and wholeheartedly engaged providing assistance and care for the victims of the devastating earthquake, but the first to start helping in a systematic and organised way were members of the Croatian Armed Forces.

The day after the devastating earthquake, a cold and foggy night, the night before the New Year’s Eve, and the buildings inside the barracks “Pukovnik Predrag Matanović” are lit up and full of people – one facility is sheltering the elderly and sick people evacuated from homes, who are taken care by the soldiers and the other is now the home for the families who houses have been damaged and no longer habitable.

The main facility houses the Tactical Operational Centre, where continuous 24-hour watch tours have been organised. Phones keep ringing, new data from the field are constantly arriving in and tables are being updated; additional forces are being dispatched to the field, meteorological conditions are watched, commenting that an aftershock that just hit was stronger than the previous one, and moving on with the work, addressing the condition of the roads and of the broken water pipes.

New symbols are being plotted on the big map, two more excavators are needed somewhere, five more civilians are being taken to the Barracks, are tents needed elsewhere? 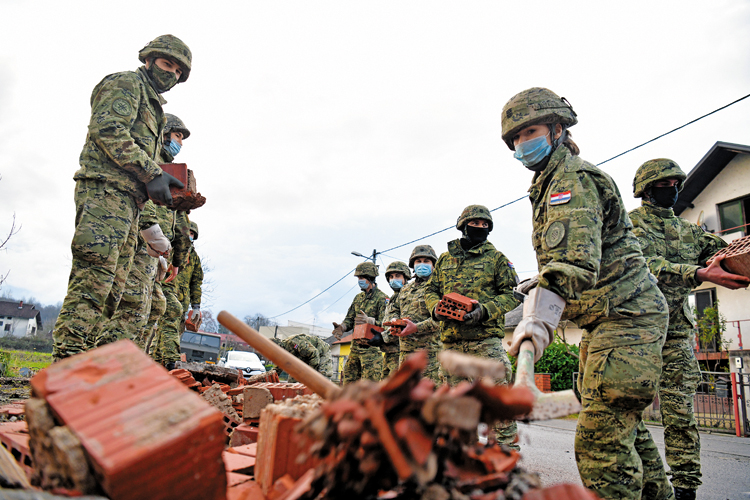 There is a host of issues to be solved quickly and clearly in this situation. Each received query demands full attention and a solution, and each solution will help a victim to ease the hardship for the night.

As hundreds of soldiers dispatched to the area from Glina to Petrinja, the villages of Strašnik, Gornja and Donja Bačuga, Pecki or Majske Poljane spend hours clearing the rubble and the roads, transporting or helping with the distribution of the humanitarian aid, some of them assist in the Tactical Operational Centre in the Barracks.

Focussed each on their field of duty, busy, on alert, impeccably organised and coordinated, many members of the battalion “Tigrovi” and “Gromovi” have been affected by the earthquake themselves as their homes were damaged or destroyed. They took their wives, children and the elderly to safer places and came back to the barracks to provide assistance to others.

When some twenty seconds after the earthquake, which seemed as the end of the world the earth calmed down, it was critical to rescue immediately the victims and organise the assistance. Within 24 hours after the earthquake the Croatian Armed Forces delivered food and water, beds, mattresses, blankets, tents, shovels, sleeping bags, power engines and pitched tents. In the first round 34 transport vehicles and transshipment vehicles were engaged (lorries, vans, forklifts, water and fuel tanks to low-load trailers and off-road vehicles. Tents for the care of the civilian population were set up at four locations – at Hrastovica, Majske Poljane, Cepeliš and Križ Hrastovački. All the necessary logistic support was provided for the reception and accommodation of civilians and forces of the Croatian Army in the barracks in Petrinja.

The staff of the Military Medical Centre of the Support Command organised in three medical teams with ambulance vehicles were tasked with transporting patients from Petrinja to Zagreb, and were supported with the Croatian Air Force’s helicopter forces. Three hours after the earthquake the military medical teams transported 20 patients to the Zagreb Special Hospital for Pulmonary Diseases and to the Psychiatric Clinic “Vrapče” in Zagreb.

The Chief Firefighting Commander Slavko Tucaković said all available fire-fighters were engaged in the assistance and interventions: “More than 800 fire-fighters from throughout Croatia were engaged on the day of the earthquake, with 125 vehicles and 11 search dogs. The armed forces, the police, the fire-fighters, the Croatian Mountain Rescue Service and all emergency services and other government units operated well-coordinated and well- organised. It enabled us to provide comprehensive contribution to the population. As in wartime, we are all united for Croatia”.