Back to homepage »
Share:
“The main event at exercise Immediate Response 19 was the movement of forces to Hungary. The objective was to verify the capabilities of NATO allies and partners in border crossing operations within NATO. The movement of the Multinational Battalion’s six convoys was successfully conducted, without any hitches,” said Colonel Ivica Matanović of the General Staff of the Croatian Armed Forces, who acted as the director of the Croatian Exercise Control (EXCON) 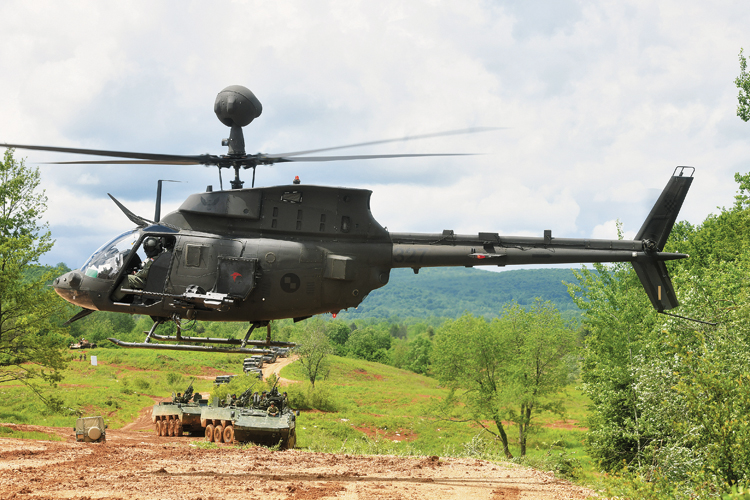 For three weeks, Eugen Kvaternik Training Area in Slunj was home to around 1600 soldiers from 14 allied and partner countries who participated in this year’s largest training event – international military exercise Immediate Response 19.

CROMIL’s team toured the training area on several occasions. Already on the entrance, it was clear that foreign soldiers were in the training area – alongside members of Croatian Armed Forces, the entrance was guarded by members of the Albanian Armed Forces. All participants of exercise Immediate Response 19 were accommodated at a camp set up for that purpose. Furthermore, a multinational battalion comprised of 626 soldiers was established in Slunj. As the host country, the Republic of Croatia has the largest share of soldiers in the Multinational Battalion (a total of 320), the commander of which was Lieutenant Colonel Samir Mršić of the Croatian Armed Forces. The exercise was planned and led by the United States Army Europe, commanded by Lieutenant Colonel Christopher Cavoli.

“The main objective was to train countries’ reception, sustainment and movement capabilities within and beyond NATO borders. Aside from Croatia, the exercise also took place in Hungary and Slovenia. In the first part of the exercise, the 173rd Airborne Brigade carried out a joint force entry. Although parachute jumps at Josip Jović Barracks in Udbina had been planned, the operation had to be conducted on land due to bad weather. U.S. soldiers practised the arrival of their forces from air, entering and securing a territory as well as seizing a key object (an airfield),” explained Colonel Ivica Matanović of the General Staff of the Croatian Armed Forces, who acted as the director of the Croatian Exercise Control (EXCON). A mechanized company of the Croatian Armed Forces’ 1st Motorized Battalion Vukovi (Wolves) participated in that part of the exercise and received praise from the commander of the 173rd Airborne Brigade, according to Colonel Matanović.

The second part of the exercise was conducted on Distinguished Visitors’ Day and was tied to the Adriatic Charter and the ten-year anniversary of Croatia’s entry into NATO. During the exercise, visitors had a chance to witness the engagement of forces within the Multinationla Battalion after a short period of integration training. The objective of the exercise was to showcase the synchronized engagement of manoeuver units, co-ordinated field artillery, air force support units and combat service support units under simulated conditions of an integrated battlefield. “In spite of bad weather on the field, I find that the exercise was executed marvellously,” said Colonel Matanović. Although announced to take part in the exercise, heavy rain ultimately forced the Croatian Air Force to drop out.

Next up was the main training event at Immediate Response: the movement of forces to Hungary.

“The objective was to verify the capabilities of NATO allies and partners in border crossing operations within NATO. The movement of the Multinational Battalion’s six forces was successfully conducted, without any hitches. Besides Croatia, Slovenia and Hungary, forces also moved from Germany to NATO’s southern wing – Hungary, Romania and Bulgaria. We received commendations from the Multinational Brigade Command and Lieutenant General Cavoli. We have done a tremendous job. I wish to extend my appreciation and praise to everyone at EXCON,” Colonel Matanović told CROMIL.

The Multinational Brigade Command played the role of the Exercise Command and the secondary training groups, while leading staff positions at the Multinational Brigade Command were assigned to Brigadier General Tihomir Kundid, the Commander of the Croatian Army’s Guards Armoured Mechanized Brigade, and his subordinates. Brigadier General Kundid spent over a fortnight at Slunj, following the activities of the soldiers deployed there.

“It is extremely important that all nations here train jointly. Through joint activities, they develop joint tactics, techniques and procedures so that they could conduct joint operations one of these days,” commented Brigadier General Kundid.

All soldiers we spoke with at Slunj were extremely pleased with the accommodation in the Multinational Battalion’s camp and the organization of the battalion.

Toni Nikolov, a platoon leader in the Rangers Battalion, Army of the Republic of North Macedonia, shared his experience: “We enjoy a good collaboration with the members of other nations’ armed forces. Our roommates in the tent are from Lithuania. All Macedonians stationed in different tents so that we could exchange experiences with soldiers from other countries. We are quite pleased with the exercise, in which the Army of the Republic of North Macedonia has been assigned with two tasks. This is a good opportunity for North Macedonia to present itself and its armed forces to other countries as well as to demonstrate that, as a future NATO member country, it is capable of fighting side by side with its partners and future allies. We hope that we shall expand the friendships made here.”

Second Lieutenant Sulejman Pašić of the Armed Forces of Bosnia and Herzegovina was also happy to take part in the exercise.

“It is a pleasure to be here and take part in such an exercise. For soldiers from Bosnia and Herzegovina, this is has been a great experience. We have been given an opportunity to apply our knowledge and learn something new from soldiers from Croatia and other countries. Also, this is a chance for us to present our country and demonstrate that we belong into this big family,” said First Lieutenant Pašić, Commander of the 2nd Infantry Company of the 1st Infantry Battalion, Armed Forces of Bosnia and Herzegovina. He added that the logistic support in the camp and the exercise itself was top-notch.

“The guiding principle in the whole exercise was that multinational forces had to cross the border as quickly as possible. The inspection on the border crossing between Slovenia and Croatia had not been too strict because the border police officials had already possessed all the paperwork about our vehicles and our equipment. On the way to Hungary, our 120 vehicles were divided into six 20-vehicle convoys. All 560 members of the Multinational Battalion set off from Slunj. We drove down a country road from Slunj to Karlovac and then switched to the Zagreb-Goričan motorway, across which five control points were scattered. As the deputy commander of the Multinational Battalion, I was in the first convoy. We expected to encounter some difficulties during border crossing. However, the convoys were held up at the crossing for only about ten minutes, which is not much, given the number of vehicles and personnel. Minor breakdowns occurred along the way; out of 120 vehicles, only two did not finish the 300-kilometre journey in both directions,” said Captain Korpič, a member of the Slovenian Armed Forces’ 72nd Brigade. Captain Korpič went on to say that the whole journey had gone smoothly, while his impressions were positive.

“The members of the Multinational Battalion not only had to cope with the language barrier but also the fact that they came from different units and different arms of the military. In spite of that, all participating nations collaborated well with one another. The Multinational Battalion’s structure was not classical, but rather suited to a specific task (border crossing). All nations deployed in Slunj worked in accordance with NATO standards. Our objective was to reinforce those standards and harmonize our procedures with them,” concluded Captain Korpič. 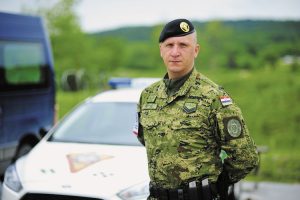 “As a member of the Military Police Regiment, my job within the EXCON of international military exercise Immediate Response 19 encompassed planning, overseeing, managing and following all tasks and activities related to the protection of participating forces. The tasks I carried out were related to mobility support operations, security operations and police operations. The objective was to alleviate and oversee the movement of forces down the lines of communication during their arrival to the international military exercise and secure the freedom of movement in the area of operations during the activities in the exercise. We were faced with the challenge of protecting a large number of participating members of foreign armed forces during the training and the preparations. Furthermore, we had to protect distinguished visitors during their visit, when the exercise components demonstrated their capabilities. I would like to underline that I am proud of Croatian participants in this complex exercise; their task execution was on a high level, without any disturbances.” 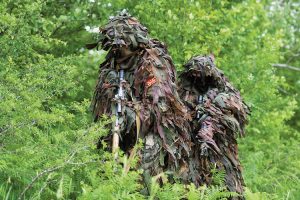 The Exercise Control (EXCON) was in charge of managing and overseeing the exercise as well as providing support to the undisturbed execution of the exercise, in line with the set objectives and scenario. Colonel Ivica Matanović (Croatian Armed Forces’ Command Operations Centre) was appointed director of Croatian EXCON, situated on Eugen Kvaternik Training Area in Slunj, while Colonel Predrag Harmicar (Croatian Armed Forces’ Command Operations Centre) was named his second-in-command.

Beside Croatian NCOs and officers, the EXCON included liaison officers from the armed forces of Albania, Bosnia and Herzegovina, Kosovo, Montenegro, North Macedonia and Slovenia. The liaison officers were the link between the EXCON and the units within the Multinational Battalion. The EXCON covered all managing functions: security and protection of forces, logistic support, communication and information as well as public relations. The EXCON also included an exercise management centre, which was headed by Lieutenant Colonel Luka Vujadinović (Croatian Army Command). This officer and his associates distributed information, plans and commands in all directions 24/7. The centre is the heart of the EXCON, so to speak. It enables continuous monitoring of the exercise in real time, co-ordinates forces’ activities, timely distributes information to all actors within the EXCON and gathers and synchronizes all information necessary for the undisturbed functioning of the exercise.