Back to homepage »
Share:
“The Croatian Armed Forces originated in the Homeland War. Today, they are a respected, modern force appreciated by their allies. We are systematically working on improving the working conditions of our soldiers, who have indeed earned it with their dedication to their work. We are investing into modernization and the strengthening of capabilities. I am glad that the ties between the Croatian Armed Forces and the public, first forged during the Homeland War, have been strengthened,” said Deputy Prime Minister and the Minister of Defence Damir Krstičević 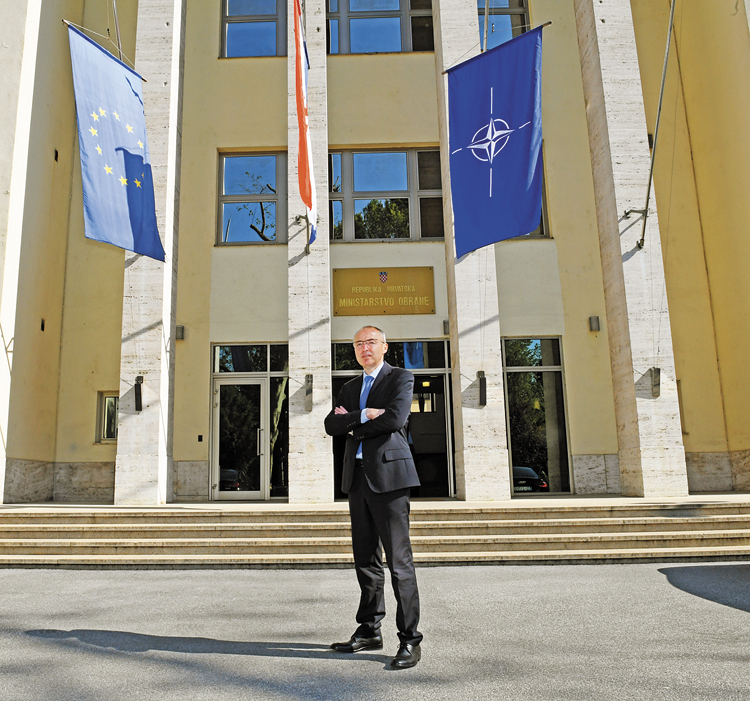 After 28 years, Homeland War hero Rudolf Perešin’s MiG-21 aircraft has returned to Croatia. How long did you work on bringing it back?

First of all, I must point out that I am extremely happy that Rudolf Perešin’s aircraft has been restored to Croatia. I am very delighted and proud of the current government for having realized that goal. The aircraft is a lasting memento of pilot and Homeland War hero Rudolf Perešin, who heroic act filled Croatia and the rest of the world with admiration. At the same time, the aircraft sends a strong message to young pilots. For the past two and a half years, all levels of defence diplomacy have quietly and systematically worked overtime on restoring the aircraft. I discussed the matter with the former Minister of Defence of Austria Mario Kunasek during his visits to Zagreb and during my return bilateral visits to Vienna.

After 28 years, the aircraft is home again. In Rudi’s honour, it has been put on display in front of the headquarters of the Croatian Ministry of Defence in Zagreb, where numerous citizens pass by it every day. Perešin’s MiG aircraft is one the symbols of the Croatian people’s struggle for independence. Therefore, the return of the aircraft to Croatia is of immeasurable value for our country. We shall forever remember Perešin’s strong message; he dared to say that he was a Croat and that he could not and would not fire at his people.

The Republic of Croatia has procured six unmanned aircraft. What is the significance of such systems for the Croatian Armed Forces? In which phase is the establishment of the Centre for Unmanned Aircraft Systems and its headquarters in the city of Pula on Istrian peninsula?

We are keeping up with the times by investing into new technologies and adjusting to new challenges. It is important that the Croatian Armed Forces, as a part of the Homeland Security System, be adequately equipped. I am glad the new unmanned aircraft systems have been procured with EU funds. They shall be jointly used by the Ministry of Agriculture and the Ministry of Defence. The EU funds are being invested into the Croatian Armed Forces’ new capabilities, which in turn strengthens the economy. With the procurement of that state-of-the-art system, the Republic of Croatia has regained the capability of air unmanned reconnaissance, a capability that was lost after the Homeland War. Within the Homeland Security System, the new unmanned aircraft system can be allocated for a number of purposes. Because it can catch sight of details from a large distance, it is efficient in early fire detection, the control of waterways, motorways and the state border as well as in providing support during crisis situations.

The establishment of the Centre for Unmanned Aircraft Systems is a significant novelty in the development of the Croatian Armed Forces that will further their existing capabilities of air reconnaissance and exercising control over the Republic of Croatia’s territory. 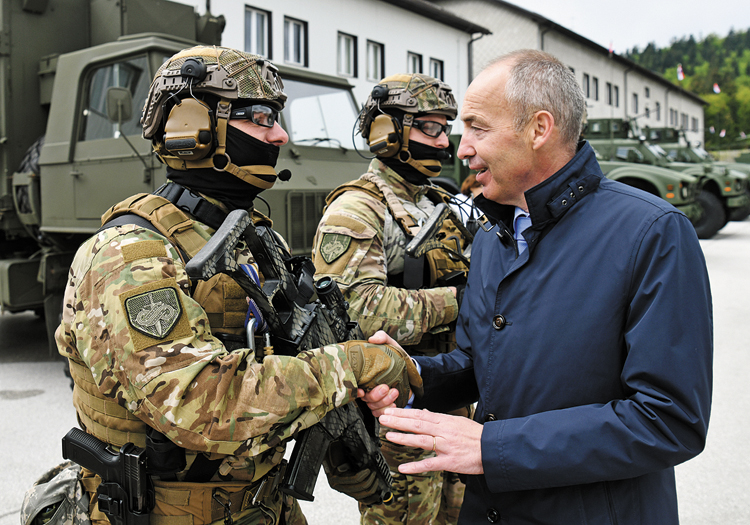 What other projects are in store?

We have laid out the establishment of the Marko Babić Leadership Development Centre, the Cyber Command and the Centre for Unmanned Aircraft Systems in Pula as the main objective for the upcoming period. The Marko Babić Leadership Development Centre in the town of Udbina in central Croatia is based on the spirit and the tradition of leadership development courses conducted at Camp Šepurine on the Croatian coast during the Homeland War. Within the scope of the Croatian Armed Forces’ necessities and their further development, the objective is to develop and strengthen the capabilities of the Croatian Armed Forces’ NCOs and officers, advance the skills of leading and commanding as well as transform junior NCOs and officers into highly motivated, trained and capable leaders and instructors. The course at the Centre will end with a 10-kilometre march from Udbina to Knin, which pleases me greatly. The Centre’s first graduation exercise will take place on this autumn Knin Fortress, a symbol of the victory in the Homeland War.

By establishing the Cyber Command, we are developing and integrating our capabilities of protecting and defending ourselves in cyberspace.

I am pleased to announce that the decision has been made to relocate cadets’ oath-taking ceremony to Knin, beginning this autumn. The cadets – as the future of the Croatian Armed Forces – are thus being linked with the tradition of the Homeland War and the towns that symbolize it – Knin and Vukovar.

The cadets will start their military education by taking an oath in Knin, the symbol of victory, whereas their graduation exercise will take place in Vukovar. These towns add a new dimension to the schooling of the Croatian Armed Forces’ prospective officers. 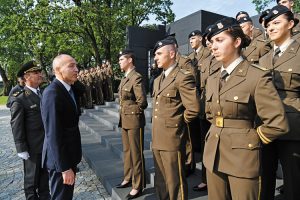 International military exercise Immediate Response 19, organized by the United States European Command, is taking place on the territory of the Republic of Croatia throughout May and June. A record number of countries is taking part this year. How else is this year’s edition of Immediate Response different from previous editions?

I am glad that the Croatian Armed Forces continue to maintain excellent cooperation and joint trainings with our partners and allies. After the successful execution of Velebit 18 – Joint Force, the Croatian Armed Forces’ most complex exercise since the Homeland War, the Republic of Croatia is marking the tenth anniversary of its accession to NATO with Immediate Response 19, a large international military exercise. Croatia is one of three organizers and host countries of the exercise, along with Hungary and Slovenia. The essential objective is the training of multinational forces’ military mobility. Croatia has been put in charge of the Command of the Multinational Battalion, where the members of its armed forces have been assigned the positions of troop commander and staff officers.

The Republic of Croatia is marking the tenth anniversary of its accession to NATO. Could you comment on its participation in the Alliance’s activities?

In the last ten years, the Croatian Armed Forces have proven to be a credible and reliable ally, while the brand of the Croatian soldier has been recognized internationally. Security and membership in the world’s most powerful military alliance come with a price, but with multiple benefits, as well. Membership in NATO is a guarantee that we shall never again have to relive the monstrosities and the ravages of the Homeland War.

The Multinational Special Aviation Programme has been set up in Lt. Col. Mirko Vukušić Barracks in Zemunik Donji, near Zadar. What is its significance for the Republic of Croatia?

The Republic of Croatia has adopted NATO’s Capability Goal relating to the development of a Special Operations Air Task Unit. Bulgaria, Croatia, Hungary and Slovenia are a part of the Multinational Special Aviation Programme, the headquarters of which is in Zemunik Donji. NATO has recognized Croatia’s potential and I am sure that our soldiers will successfully collaborate with their foreign colleagues.

The Programme’s purpose is to provide multipurpose helicopter crews with practical and theoretical training in conducting unconventional special operation air tasks. We expected that the facility in Zemunik Donji will acquire the status of a NATO Centre of Excellence in the future.

Has the Homeland Security System taken hold? In which aspects has it proven to be vital for the Republic of Croatia?

The recently conducted inter-departmental exercise Security 19 was a demonstration of the Homeland Security System in action. For the sake of security, we have developed a system based on partnership, unity, joint action and the synergy of all components of the System with the local community and the public. The Homeland Security System makes us all better: we are more co-ordinated and our reaction time is faster. Only through a joint system can we handle security threats.

The Military Solidarity Foundation has been set up, while 2019 has been declared the Year of Solidarity. Why is the Foundation important for the employees of the Ministry of Defence and the Croatian Armed Forces?

After 27 years, the Croatian Armed Forces have their own solidarity foundation. The purpose of the Military Solidarity Foundation is to promote charity work and support the employees of the Ministry of Defence and the members of the Croatian Armed Forces whenever they are seriously injured or their welfare is in jeopardy. The Foundation has been established so as to to provide financial assistance in the medical treatment of seriously injured or ill soldiers, civil servants, civil employees and their family members. Likewise, the Foundation aims to provide financial assistance to the families of deceased soldiers, civil servants and civil employees. 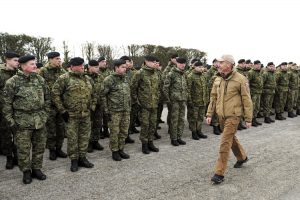 Will the deployment of the Croatian Armed Forces to towns around Croatia be continued? Do you plan on continuing the investments into the infrastructure in barracks and on improving Croatian soldiers’ living and working conditions?

Since the current government has taken office, we have been dedicatedly using the increased defence budget to raise the Croatian Armed Forces’ living and working standard, renovate accommodation facilities, open new barracks and secure job stability for our soldiers. Every penny has been invested into a specific purpose for the benefit of our enlisted soldiers, NCOs and officers. We have restored the pride and dignity that the Croatian soldier enjoyed during the Homeland War.  In line with the new operational structure, we have completed the project of returning Croatian Armed Forces troops to the towns of Sinj, Vukovar, Ploče and Varaždin so that soldiers could be closer to their families. Simultaneously, we have improved the living and working conditions. The barracks in Pula are set to be opened in autumn.

An important novelty is a new law which guarantees soldiers a permanent job and stability after the expiration of their initial, fixed-term contract. We systematically continue modernising and strengthening the Croatian Armed Forces.

Where do things stand on the procurement of combat aircraft and Black Hawk utility helicopters?

The government is determined to resolve the matter of procuring combat aircraft. Talks with interested parties (Sweden and the United States of America) are on-going.

We find that Croatia and its future generations are in need of combat aviation and we want to provide them with the best possible option. We expect to receive a donation of two Black Hawk helicopters worth 350 million USD in the next two years.

I am Proud of Every Croatian Soldier Honourably Representing Their Homeland