Back to homepage »
Share:
On the occasion of the 15th anniversary of the formation and first public appearance of the Croatian Air Force Display Team “Wings of Storm” as well as 14 years of their performing in official capacity, CROMIL brings an overview of the most important events that have marked the aforementioned period 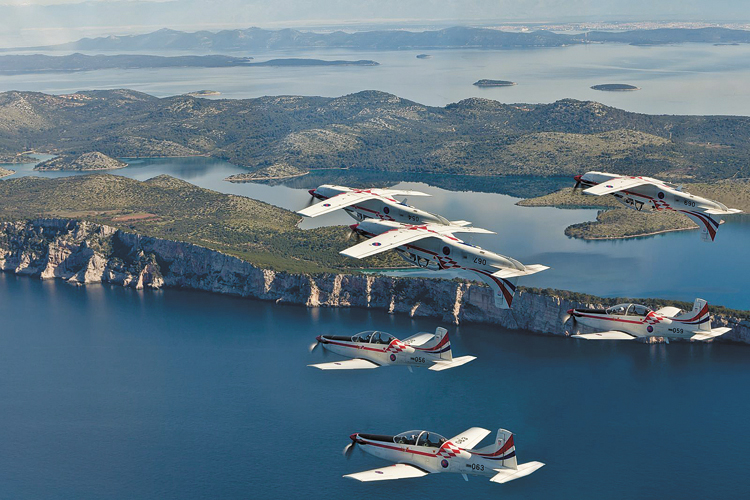 Diana Doboš was also only the third woman in world history to fly in an aerobatic display team.

2005 – Official Presentation and First Appearance as “Wings of Storm”

5th August, Knin. The official presentation of the Croatian Air Force’s aerobatic team and the first display under the name “Wings of Storm” at the ceremony marking the 10th anniversary of the Homeland War’s (1991-95) Operation Storm. The same team from the previous year flew on Pilatus PC-9M aircraft above Knin Fortress.

That autumn, a fifth member was introduced and a five-aircraft formation debuted on 15th October in Knin.

29-30 July, Constanţa, Romania. The first international performance at the Romanian International Air Show (RoIAS) 2006, where the team performed a display in a five-aircraft formation on Pilatus PC-9M aircraft.

“Wings of Storm” added tall slide to their programme, the first of many demanding and rare manoeuvres for which the team are known internationally. 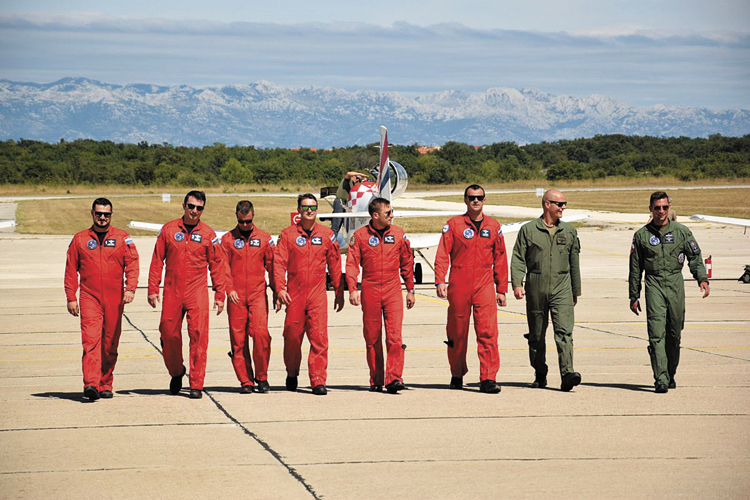 In August 2008, the “Wings of Storm” began to perform with helmets specifically designed for them by Silvano Mainini and the Old Crow Team. On 12th December, the team debuted their red overalls at the ceremony marking Croatian Air Force Day in Zemunik.

For the first time since the team’s formation, the leadership of the “Wings of Storm” changed as Damir Barišić took over as group leader from Miroslav Franjić in September 2008.

2008 was also remembered for eight displays outside of the Republic of Croatia, which is the largest number of the team’s international displays in a single year to date.

On 25th March, the sixth member was initiated into the “Wings of Storm” and the team began flying in a six-piece formation on Pilatus PC-9M aircraft.

That year, the team debuted their best known and most attractive manoeuvre – the triple mirror a.k.a. dia.

2010 – Display in Front of Half a Million Spectators

11-12 September, Rivolto, Italy. The “Wings of Storm” performed a display in front of 500,000 spectators – their largest audience to date. They presented their programme at an air show on the occasion of the 50th anniversary of the establishment of the Italian Air Force’s aerobatic demonstration team “Frecce Tricolori” (“Three-Coloured Arrows”).

4-5 June, İzmir, Turkey. The “Wings of Storm” performed outside Europe for the first time, at a ceremony marking the 100th anniversary of the establishment of the Turkish Air Force. The performance was viewed by more than 60 air force commanders from all over the world.

10th June, Aalborg Air Base, Denmark. The “Wings of Storm” won their first international prize for the best display at an air show in the north of Denmark – the northernmost location of their performances to date. Furthermore, the team also won an award for the best display at the Czech International Air Fest (CIAF), which makes 2012 their most award-winning season to date.

In September 2012, Matija Vrđuka took over as team leader from Damir Barišić.

The “Wings of Storm” Display Team received the Zadar City Award for their exceptional contribution to the promotion of Zadar at the city council’s formal session on the occasion of Zadar City Day and the feast of Saint Chrysogonus, the city’s patron saint (24th November).

The “Wings of Storm” performed their jubilean 100th display in the north Adriatic town of Rovinj on 13th April.

After the departure of the previous line-up, Damir Barišić took over the leadership of the display team once more and the “Wings of Storm” began to perform in a new, significantly younger line-up. 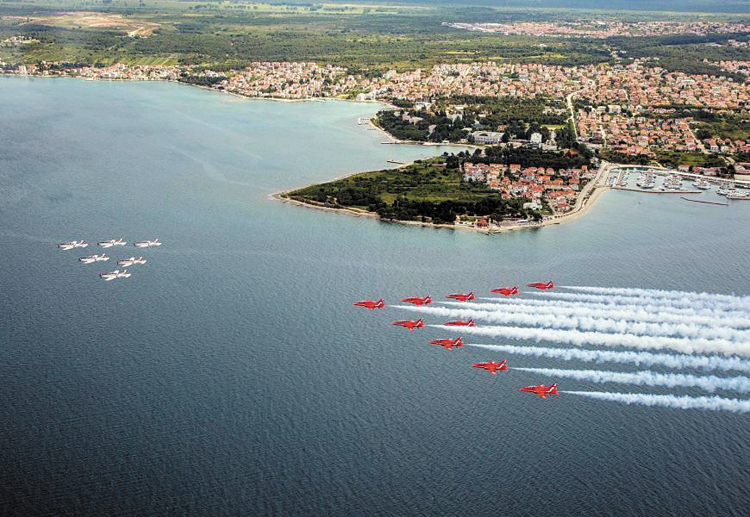 2016 – Greatest Recognition for “Wings of Storm”

9-10 July, Fairford, United Kingdom, Royal International Air Tattoo. Prince Faisal bin Hussein of Jordan presented the “Wings of Storm” with the King Hussein Memorial Sword, the most prestigious award at the air show, which they won for the best overall demonstration.

RIAT has been held since 1971 and is considered to be the most prestigious military air show in the world. Its 2003 edition was recognized by Guinness World Records as the largest ever military air show, with 535 aircraft in attendance. Six awards are given out and the main award is named in honour of the late King Hussein of Jordan, a long-time sponsor of the manifestation.

In 2017, the “Wings of Storm” initiated collaboration with aerobatic teams “Frecce Tricolori” (ITA) and “Red Arrows” (UK). Since then, the teams have been mutually visiting each other and training jointly every year.

The current Team Leader Darko Belančić took over the post from Damir Barišić in March 2017. Later that year, the team won an award for the most precise display at an air show in Slovakia.

2018 is also remembered for record-breaking 25 displays in a single season, five of which took place outside Croatia.

“The Wings of Storm” have performed 196 displays so far (143 in Croatia and 53 abroad). They have presented their programme at the most prestigious air shows in 15 countries (Austria, Belgium, Czech Republic, Denmark, France, Germany, Hungary, Italy, Poland, Romania, Slovakia, Slovenia, Switzerland, Turkey and United Kingdom).

All Pilots of “Wings of Storm”