Back to homepage »
Share:
Members of the 173rd Airborne Brigade of the U.S. Army conducted the Exercise “Eagle Royale“ in the Training Range "Eugen Kvaternik", featuring live firing by the Mortar Platoon of the Battalion “Pauci“ of the Guards Mechanised Brigade of the Croatian Army. The Mortar Platoon performed  a combat task with the use of a UAV 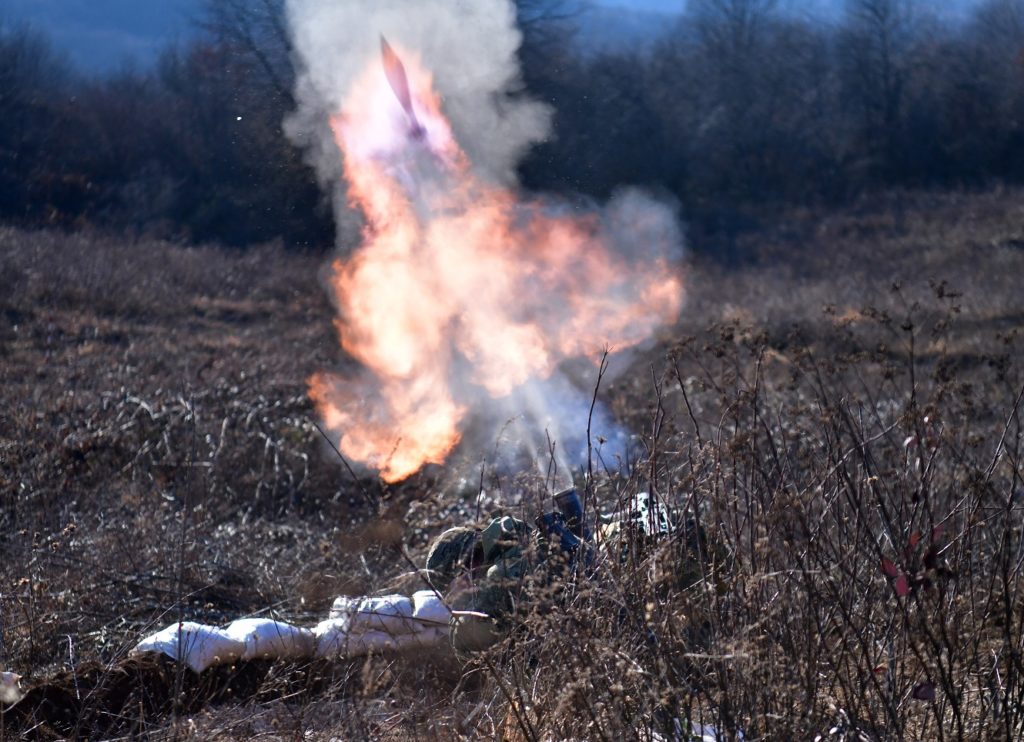 The Military Training Range “Eugen Kvaternik” near Slunj was the venue of the Exercise  “Eagle Royale“ by the 173rd Infantry Brigade Combat Team-Airborne of the USAREUR , which was conducted at various locations in Germany, Slovenia and Croatia from 31 through 8 February 2020. The Exercise engaged some 350 members of the 1st Battalion (Airborne), 503 Infantry Regiment (1-503rd IR) assigned to the 173rd Airborne Brigade.

“We have cooperated with 173rd Brigade for the second year already, they were here on a similar activity last year, practicing live firing and integration with other allies“, explains Lieutenant Colonel Andrija Žarinac, Head of Exercise Coordination, Observation and Reporting Team.

The Exercise “Eagle Royale“ engaged some 60 members of the Croatian Armed Forces (the support elements for Host Nation Support and Real Life Support, one 82-mm Mortar Platoon and a unmanned aerial vehicle team of the Guards Mechanised Brigade of the Croatian Army (a total of 35 members).

The Exercise “Eagle Royale“ engaged some 60 members of the Croatian Armed Forces with support eleemnts for Host Nation Support and Real Life Support, with one 82-mm Mortar Battery and a UAV Team of the Guards Mechanised Brigade of the Croatian Army (up to 35 members).

The Exercise featured live firing by the 82-mm Mortar Platoon of the Battalion “Pauci“ of the Guards Mechanised Brigade of the Croatian Army.  Although the initial plan previewed the engagement of the 173rd Brigade’s mortar platoon, the U.S. platoon  was deployed to the area of operations in the Middle East, and was replaced by  the Croatian Platoon, with a total of 35 members, which used an UAV  for the first time.

“We are conducting the integrated fire task with UAV target homing, which is a novelty both for us and for the members of the 173rd Brigade (in charge of guidance in the Exercise), as it is normally a duty of forward observers“, said 2nd Lieutenant Petra Popović of the Support Platoon of the 2nd Company of the 3rd Mechanised Battalion “Pauci“, which is represented by  four crews at the firing activity.

The young officer commended the co-operation with the members of the U.S. Brigade. During the first days spent in the “Eugen Kvaternik“ Range, the members of the two armed forces prepared firing positions, co-ordinated radio-procedures and the Call for Fire.

“We agreed on common terminology, in accordance with NATO standards. During the firing the UAV spots the target at the distance of three and more km and thus beyond our sight, and conveys it to the forward observers of th 173rd Brigade, who in turn report us on the target location“, explains 2nd Lt. Popović. “The UAV over the target is not static, the gunners will have to act really quickly to hit the target“.

The gunners performed the task well, hitting all  targets, as we could see for ourselves.

“The Exercise outcome exceeded our expectations. The radio-communication with the U. S. forces and UAV target homing went impeccably“ said 2nd Lieutenant Popović after the round.

The members of the 173rd Brigade will most certaintly continue to train in the Training Range “Eugen Kvaternik“ next year, as they are very satisfied with the offered training condition in Croatia as a host country, says Lt. Col. Žarinac.

“Our colleagues of the U.S. brigade are very happy with the terrain,  very suitable for live firing and with our logistic support, the accommodation, messing, and ground support. They highly value the way we perform our tasks and plan to come again next year”.

We also use the training area for Squad STX (Situational Training and Exercise). We test our squad leaders – their ability to react in certain situations, we have our specialty platoons here as well – our mortar platoon is here  connecting joint training with the Croatian mortars here. We are working procedures together, to see how the Croatians shoot to get a better understanding of how we can work together  and implement our systems together .

Our snipers are here as well, shooting at long-range

We have our forward observers here as well (who they will observe for the shootings the Croatians will conduct).

The training we are conducting here in cooperation with the Croatian forces is vital in our building  partnership capacity within the European theatre.

It is important that we conduct relations with each other to further our nations’ abilities to defend Europe and against any threats that might come up.