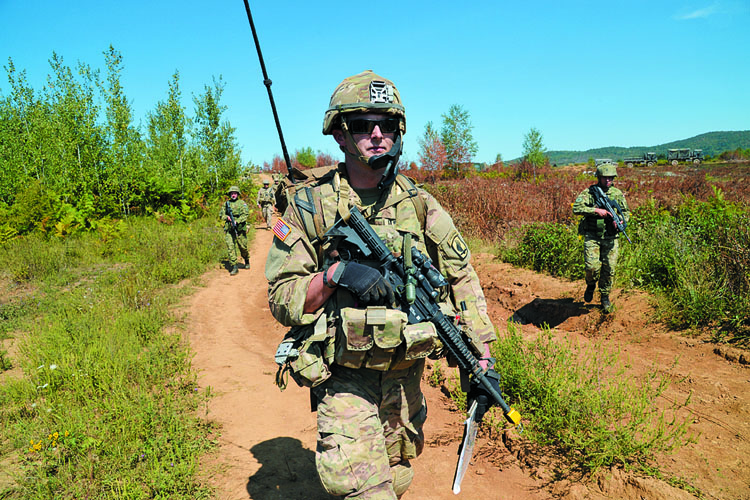 The Training Range “Eugen Kvaternik” hosted a U.S.-Croatian military exercise““Shock 17“, aimed at upgrading the interoperability of a company of the Battalion “Gromovi“ of the Guards Mechanised Brigade of the Croatian Army and of a company of the 1st Airborne Battalion of the 503rd Battalion of the 503th Infantry Regiment of the 173rd Airborne Brigade of the U.S. Army. The exercise “Puma 2016“ conducted in the Range last October was followed by joint events outside the borders of Croatia. In mid-August 2017 however the members of the 1st Airborne Battalion of the 503rd Battalion of the 503th Infantry Regiment of the 173rd Airborne Brigade of the U.S. Army  arrived from its Base near Vicenza (IT) and were welcomed by the members of the Guards Mechanised Brigade of the Croatian Army (1 Company of the 2nd Mevchanised Battalion “Gromovi“). The two units joined the efforts  from 16 to 28 August 2017 to attain training objectives of the military exercise “Shock 17“, primarily the interoperability in the conduct of the operation“, said the head of the Main Planning Team, Captain Robert Budimir Bekan of the Guards Mechanised Brigade to the team of the “Hrvatski vojnik“ magazine. The Command fo the Battalion “Gromovi“ also took part in the Exercise.
Covering of any exercise at Slunj implies high mileage. There are a number of workposts scattered across the Range, and a various in-classroom and practical training events are taking part concurrently.  The Croatian and the visiting soldiers occupied spots in tents, classrooms in the facilities, atop the hills or in highly inaccessible grounds. They only differed from each other in uniforms, the insignia and the weapons used, but our general impression was that we observed two companies of modern-equipped NATO professional  militaries. The 173th Brigade has existed since the World War I, and took part in the World War II and in Vietnam, and in the campaigns in Iraq and Afghanistan. The 1st Company of the Battalion “Gromovi“ has been inforporated into NATO Rapid Response Force, and their readiness level has been upgraded. For the  U.S. part , along with interoperability aspect, the focus in the Exercise was the squad-level training, as the unit has received in new members.”The terrain is very fit for drills; we don’t have any grounds similar close to our Base in Italy. The friendly host forces and their support have made our light infantry forces training a success. The allies need to know each other as thoroughly as possible, especially ahead of a joint deployment“, says Capt. Oplinger, the Commander of the U.S. company on heading towards the Tactical Field Centre with his soldiers .The exercise Shock 2017 was an opportunity for the Croatian and U.S. soldiers  to practice day- and nighttime livefiring and crew drills and to familiarise with the weapon systems operated by the other side.  The assets used included the VHS2 and M4 carbines, the M240L machine gun,  the  M249 light machine gun, the general purpose H&K G21 machine gun,  the  M224 mortar, the VHS-BG and  M320 grenade launchers, the Javelin missiles  and 9K111 Fagot anti-armour systems, the Skylark UAV (displayed by the members of the Intelligence Division) and RQ-11 Raven. The U.S. forces were not equipped with heavy armour  while the “Gromovi“ Battalion operated the Patrias , which the U.S. personnel referred to as Strykers,  given their resemblance to the eight-wheel drive amoured fighting vehicle in the operational service of the U.S. Army.
The two sides admired each other’s weaponry – the members of the “Gromovi“ Battalion were impressed by the Javelin  ”lock-on-target“ properties  and the U.S: Airborne troops  praised the Croatian-made VHS rifle.
The U.S.  unit hired civilian contractors to provide support in the Exercise – the former military personnel specialised for various domains they continue practicing in after the retirement. 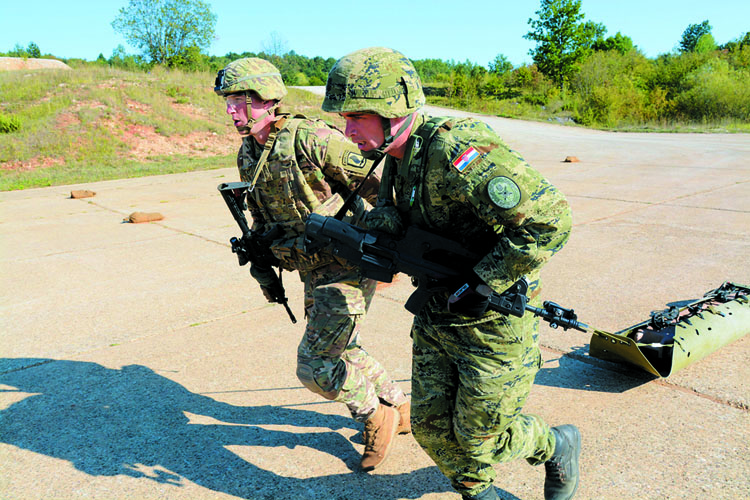 For instance, Russel Stokes, the  Iraq and Afghanistan veteran, held a lecture on IED identification and coiuntering for the members of the “Gromovi“ Battalion , one of the rotating training groups, to which he added  a practical exercise, involving idenfitication of drill IED placed in the surrounding  area. The contracted experts also attended to the U.S.-made mobile shooting ranges ( a combined target and the respective wireless  scoring system). The targets were posted at several locations throughout the Range, and were engaged by infantry and heavy weapons. At one shooting range the U.S. squad practiced instinctive shooting with M4 carbines.
The range was built  within a few hours and can be reassigned witin a hour, the same as the targets and the range control system  placed on a nearbly hill and run by an operater.
Unfortunately , we missed the shooting competition  featured within the Exercise; it was the shooting by mixed U.S. – Croatian pairs in movement, after a series of tasks done under exertion (jumps, press-ups and carrying of a “wounded “ peer).  Each failure added penalties  to the overall shooting score. It was a highly useful and challenging drill.  The most eye-catching moments during our visit were those in the Tactical Field Centre.  The part of the Training Range most often hosting large inter-service exercises of the Croatian Armed Forces (“Udar“) or tank firing drills now teemed with  the U.S. and Croatian soldiers .
We spoke briefly with the soldiers rehearsing the procedures of the closing exercise in the improvised shelters and fully equipped. Pvt  Dominic Phillips, from California, told us:
”It is hot, but with much less humidity than during the exercises in Italy. Also, it is always exciting to do joint activities with other units from NATO.  The exercise is about maintaining and upgrading the interoperability, combining the units and co-operation.
The Croatian Army’s Patrias  look really powerful and also comfortable.And the impressions of our Croatian colleagues, particularly those older than us and with more experience, are really interesting“. His colleague, Pvt. Matija Zorić is praising the co-operation with the U.S. troops and the intensive exercise:
“We are exchanging tactical and other experiences, talking about the assets we use and the training events we have taken so far. I think they are sometimes surprised to witness to our readiness, which we have demonstrated since our first day here“ .
The Exercise also comprised opportunities for socialising and chatting about assignments, weapons, tasks other aspects of  the soldiers life but also about other non-military aspects. In addition, they were not separated during the drill – both forces were accomodated in the same tent village.
The Exercise ended with a field  practice, after our visit. The light US. Infantry company, reinforced with a mechanised platoon of the Battalion “Gromovi“ operating Patrias conducted offensive.  Cpt. Bekan stated that both sides demonstrated high motivation. „“International exercises are much different from the exercises the soliders are used to; they are an opportunity for all of them to learn and the interoperability has eidently been upgraded“.
D. Vlahović; foto: J. Kopi

Tagged with: 173rd Airborne Brigade of the US Army military exercises