Back to homepage »
Share:
The course for forward artillery observers organised by the Artillery and Missile Regiment of the Croatian Armed Forces lasted for five weeks, and we visited the instructors and participants before the combat shooting 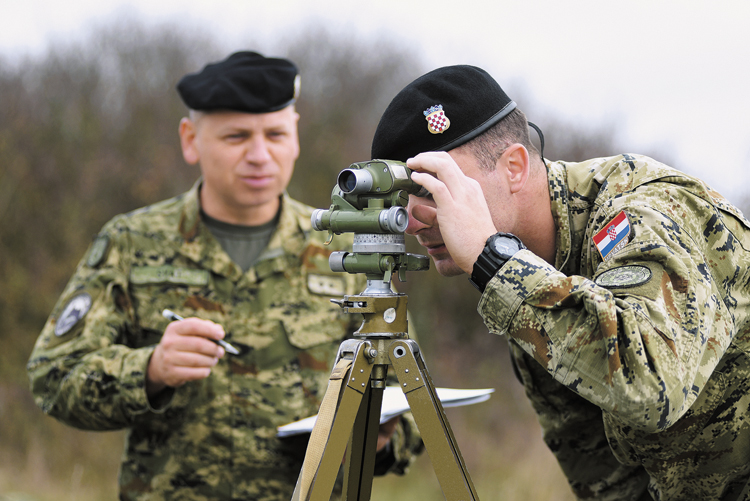 The artillery training and exercises contain more than just concluding exercises and live firing. Therefore the “Hrvatski vojnik” magazine made an exception, and visited the trainees and instructors in earlier training phases of a 5-week course organised by the Artillery and Rocket Regiment of the Croatian Army, that took place from 12 October to 13 November 2020. During that time the trainees fill in the batteries with information and firing data, which adds significantly to hit accuracy.

The military training ground “Lepirac” is adjacent to the Barracks “Bilogora” in Bjelovar. The location, infrastructure, terrain configuration and a ​​200-hectare area is a most suitable ground for artillery courses except for live firing. .of the training can be conducted, except for combat shooting. The Course had an international character, as alongside ten Croatian trainees it was attended by four artillery officers from the Army of Montenegro.

”The Montenegrin trainees adapted perfectly, in terms of orders, the line-up, daily activities and all trainees work as one team. They are all highly motivated, and the Course was an activity of their choice”, said the Course administrator Captain Igor Matijašić.

“Call for fire is a basic military skill for each soldier. We plan to introduce “military cards”, containing the basic data necessary to perform call for fire”, says Cpt. Matijašić.

During the training the instructors were most concentrated on the extensive topography. The trainees were divided into two-member observer. They use various optical devices, maps and s, maps and calculating tables. Depending on the task some trainees are standing outdoors, while some have crept into locations hidden in the colourful autumn scenery. Instructors are always in the vicinity, ready to check, to provide advice or answer. Among them is Sergeant First Class Goran Kovač, with a 17 year experience in artillery and 13 years as instructor. SFC Kovač commends the trainees and says the new generations display superior technical and computer skills.

SFC Kovač describes his duty: “Many trainees have previous experience, and all of them are at least vaguely familiar with the tasks, and our job is just to organise it all into a structured unit and to motivate them to do their best”. Interestingly, the future forward artillery observers are instructed to consider various tactics to accomplish the objective. “It means that they can continue operation, which is necessary if they are short of any technical system”, says SFC Kovač.

The course also features operation on the VBS simulation system. “Put briefly, we perform each procedure several times so that the trainees acquire confidence and mastery and get ready to take part in live firing”, said SFC Kovač.