Back to homepage »
Share:
The Croatian Deputy Prime Minister and Defence Minister Damir Krstičević presented the four main priorities of the Croatian Presidency of the Council of the EU at the conference “An Influential Europe“ held in Osijek 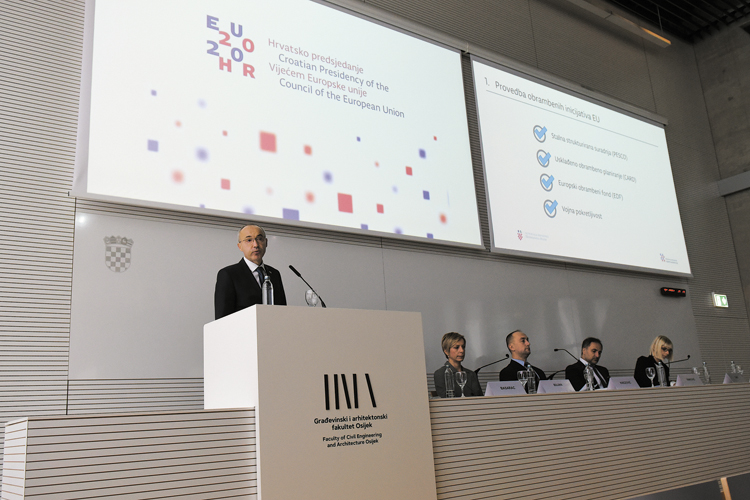 The Republic of Croatia is taking over the presidency of the Council of the EU as of January 2020. The semester of presidency will favour Croatia’s position within the EU and at the global level.

The presidency is a great opportunity to promote Croatian political and economy interests. During November 2019 conferences were held throughout Croatia to present the four main priorities of the Croatian Presidency  – Europe that develops, connects and protects and is influential on the global scene.

The host town of the Conference – Osijek – is a town best representing multiculturalism of the European Union as a home to members of 22 national minorities living in the Republic of Croatia.

The Conference participants were welcomed by the Rector of the University of Osijek Prof. Vlado Guberac, by the Deputy Mayor of Osijek Žana Gamoš and the President of the Osijek Baranja County Assembly Dragan Vulin.

Minister Krstičević presented the four domains and activities of the Ministry of Defence and of the Croatian Armed Forces during the EU Presidency.

The first priority – Implementation of the European Union’s defence initiatives – places the emphasis on Permament Structured Co-operation (PESCO), enhancing the European defence capabiltiies through defence investment and joint projects, as well as on Coordinated Annual Review on Defence (CARD), the European Defence Fund (opening the new opportunities for small and medium-sized  enterprise) and on military mobility facilitating cross-border movement and implementation of military tasks. The main goal of the initiatives is to develop capabilities through co-operation, avoid unnecessary  duplication and waste of the material and human resources.

The second priority pertains to enhanced EU-NATO co-operation, and the Ministry insists on the complementarity of the two institutions and avoidance of duplication of efforts, which is of high importance for all member countries. The EU’s defence initiatives listed within the first priority are seen as contribution to a stronger NATO as a guarantee of Europe’s stability.

The third priority of the Ministry of Defence consists in enhancement of industrial and research dimension, wherefore in the upcoming period Croatia will place focus on ehanced competitiveness of its defence industry. From its perspective of a small-sized member country it is highly important to  take into account the availability of the funds for the small and medium-sized enterprises, which is the only way to ensure balanced distribution of resources and development of defence industry and of the research community.

The fourth priority pertains to to enhanced EU endeavour in defence and security in southeast Europe. Considering the security and stability of immediate neighbourhood, the goal is to bring the   EU’s attention back on it and to and indicate new threats faced by the countries of southeast Europe and to provide them the support needed.

A proposed support model consists in structured dialogue and exercises, particularly with the building of their capabilities of response to security and other threats, including the hybrid threats, cyber security, illegal migrations and strategic communication.

The presentation was followed by a panel discussion on key topics and activities of the Croatian Presidency of the Council of the EU, featuring the contributions by the ministers Krstičević  and Grlić Radman, by Sandro Knezović of the Institute for Development and  International Relations,  by  the Administrator of the Doctoral School of the University of Osijek Mario Vinković, by the Chairman of the Croatian Defense Industry Competitiveness cluster Goran Basarac and Dunja Duić of the Law School of the University of Osijek.

Among the numerous activities to be conducted in Croatia during its presidency will be an international conference titled : The Future of the Croatian Defence Industry and New Technologies, to be organised in co-operation with the European Defence Agency and held in Zagreb in March 2020 and a conference on EU-NATO Co-operation to be held in Split in June.