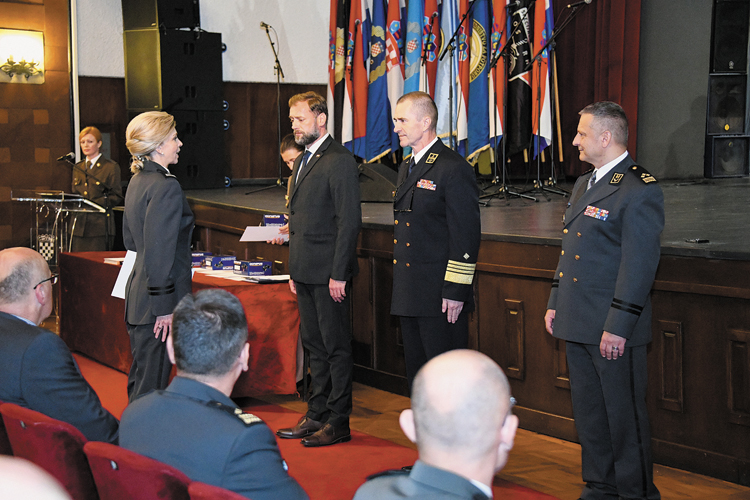 On the occasion of the 29th anniversary of the General Staff of the Armed Forces, a ceremony was held at the Ministry of Defence of the Republic of Croatia on 25 September 2020, featuring the presentation of commendations and awards to members of the Croatian Armed Forces.

The formal ceremony was attended by the Defence Minister Mario Banožić as Envoy of the Prime Minister, by the Advisor to the President of the Republic Dragan Lozančić, by the Chief of General Staff Admiral Robert Hranj, by former chiefs of the General Staff, and by senior military and civilian officials.

“The defence capabilities of the Croatian Armed Forces, particularly the equipping and modernisation and the upgrade of their living and working conditions and the strengthening of the strategic partnership with NATO and with the EU, the strengthening of the culture of cooperation, understanding and trust strongly depend on the synergy with the Ministry of Defence and the full support to the operation of the General Staff”.

Admiral Robert Hranj said that the establishment of the General Staff was of invaluable importance for the establishment and organisation of the present day’s professional Armed Forces. Adm Hranj reminded of the merits of the former chiefs of the General Staff – Anton Tus, Janko Bobetko, Zvonimir Červenko, Pavle Miljavac, Davor Domazet-Lošo, Petar Stipetić, Josip Lucić, Drago Lovrić and Mirko Šundov.

“Leading the Croatian military we built together during the struggle for the survival of the Croatian people has been is a great honour and responsibility. Every time brings challenges, and today the Croatian Armed Forces are a respected military force, which successfully completes all assigned tasks in the country and worldwide. All former and present members of the General Staff can be proud of that because each of you contributed to that”, said Admiral Hranj, who also underlined the recognisability of the Croatian Armed Forces a home and worldwide.

“The Armed Forces have developed and become the pride of Croatia, and the General Staff has grown into a focal point of professional and quality management of the Croatian Armed Forces, which has always been manned by determined and professional officials who turned visions into reality, fails into advantages and threats into challenges” said Admiral Robert Hranj.

Ahead of the ceremony the Croatian Military Ordinary Msgr. Jure Bogdan recited a mass in the Chapel of Saint John Paul II, and respects were paid at the tombs of the deceased chiefs of the General Staff in Zagreb and Sisak.