Back to homepage »
Share:
While congratulating all students of military schools on their results and thanking their families for supporting them, the Minister of Defence Damir Krstičević said: “With your hard work, you have demonstrated that manpower is the most important component of the defence system. Along with equipment and all other resources, you are the ones making all the difference.” 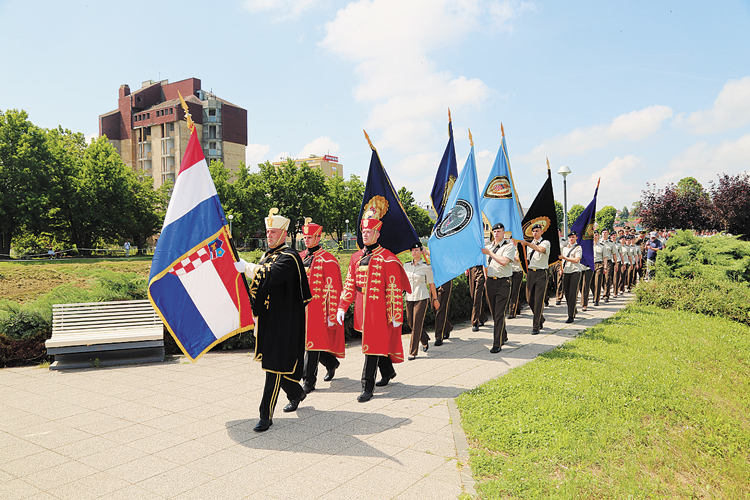 In the ceremonious atmosphere of Statehood Day, one of the most important dates in modern Croatian history, a commencement ceremony for 134 students of the Dr Franjo Tuđman Croatian Defence Academy’s military schools was held in Vukovar on 26th June.

Along with the graduates’ friends and family members, the ceremony was attended by the President of the Republic of Croatia and the Commander-in-Chief of the Croatian Armed Forces Kolinda Grabar-Kitarović, Deputy Prime Minister and the Minister of Defence Damir Krstičević as the envoy of the Croatian prime minister, the Chief of the General Staff of the Croatian Armed Forces General Mirko Šundov and the Commandant of the Dr Franjo Tuđman Croatian Defence Academy Major General Mate Pađen with their associates, foreign ambassadors, foreign defence attachés, command senior enlisted leaders, representatives of the City of Vukovar and Vukovar-Srijem County, Homeland War veterans’ associations, etc.

Stressing that graduated soldiers made their families, their country and the Croatian Armed Forces proud, President Grabar-Kitarović recalled that generations of their ancestors had kept the faith in and aspiration for a free Croatia alive even in the most trying times of Croatian history.

“Vukovar paints a symbolic picture of the centuries-long dream of Croatian statehood. Led by the first Croatian president Franjo Tuđman and linked with indescribable unity, we have made that centuries-old dream a reality. Draw a lesson from the centuries-long struggle for Croatian statehood during this festive occasion. Think of it as a guiding principle and a permanent commitment in your future military service. Never persist in the struggle for Croatia,” the president said.

“If anything, Vukovar has taught as a lesson about the significance of man as the highest measure of the Croatian Armed Forces’ values and capabilities,” Grabar-Kitarović concluded. 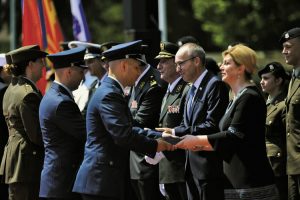 Minister Krstičević confessed that he was proud that the ceremony had returned to where it had symbolically always belonged – Vukovar.

“There is no better or more ceremonious place to hand out these diplomas than Vukovar. Therefore, I find that enlisted soldiers, NCOs and officers ought to come to Vukovar, pay homage and respects to its sacrifice and receive their diplomas there. Vukovar is the centre of gravity of the Croatian Armed Forces. None of this would have happened without the support from the Croatian Government and the Croatian president,” Minister Krstičević recalled, adding that Vukovar was a place of pride and strength for the victorious Croatian Armed Forces.

“Starting this year, cadets’ oath-taking ceremony will take place on Knin Fortress. Vukovar will thus be symbolically linked to Knin, another symbol of victory in the Homeland War,” Minister Krstičević said.

Krstičević further underlined that inspiration and strength for new endeavours ought to be sought in the sacrifice made by Vukovar and its Homeland War (1991-1995) veterans, especially in times of hardship.

“The Croatian Armed Forces were successfully founded in this city, in a hail of grenades. Under the leadership of the first Croatian president Franjo Tuđman, a robust and professional military was established. I am proud of the fact that an engineer unit of the Croatian Armed Forces is living and working in Vukovar, where its members belong. By 2020, the entire Engineer Battalion will be living in Vukovar, working at the Barracks of the 204th Brigade of the Croatian Armed Forces and helping the local population,” Minister Krstičević said, adding: “Never forget that this military grew out of the common folk and is intrinsically linked with them – for better or worse.”

While congratulating all students of military schools on their results and thanking their families for supporting them, the Minister Krstičević said: “With your hard work, you have demonstrated that manpower is the most important component of the defence system. Along with equipment and all other resources, you are the ones making all the difference.”

Minister Krstičević also recalled that a recent poll had shown the Croatian youth trusted the Croatian Armed Forces more than any other institution and mentioned that Homeland War hero Mile Dedaković Jastreb’s daughter was among the graduates.

In conclusion, Minister Krstičević sent the following message: “With each new day, you push the envelope of knowledge, thus improving yourselves and strengthening the victorious Croatian Armed Forces.”

The Chief of the General Staff of the Croatian Armed Forces thanked the parents of young officers who will be commissioned and assigned to a duty after the completion of their schooling.

“These young people are the future of the Croatian Armed Forces and will carry our homeland’s defence system in the near future. I hope that prospective leaders have been recognized among them. Leadership is all about character, which is a sum of human and ethical values. In turn, character is all about life-long yearning for personal excellence,” General Šundov said.

Graduates included 19 foreign students: ten from Bosnia and Herzegovina, three from Montenegro, three from North Macedonia, two from Kosovo and one from Slovenia.

“We are pleased that the number of students from allied and partner countries increases every year. This shows that the quality of our military schools has been recognized beyond the borders of our homeland,” General Šundov concluded.

The Commandant of the Croatian Defence Academy conveyed that he was satisfied with and proud of the students’ results, highlighting that they were a guarantee of  stable, robust, modern and promising Croatian Armed Forces.

“Our next step is the creation of legal prerequisites for the transformation of the Croatian Defence Academy into a scientific research institution of higher education which will defend our country and keep it safe. By realizing this objective, the Croatian Defence Academy will acquire new capabilities and the autonomy needed for the further development of military education, military training and military science,” General Pađen said.

The valedictorian of the Blago Zadro Command and Staff School Major Ivan Grgić received a medallion and a 5,000-kuna (762.63-USD) prize from Mayor Penava. Just like last year’s valedictorian, Major Grgić will donate the money to a family in need.

This year, the money will go to the Varga family, comprised of a father and three children, one of whom is a special-needs child.

“I am extremely proud to be here today because my father is a Homeland War veteran and he was my motivation to join the Croatian Armed Forces. We shall see what the future holds; this is only the first step,” said Second Lieutenant Doris Kraljik, a graduate of the 18th class of the Basic Officer Course.

Second Lieutenant Luka Hrga, a military pilot and the valedictorian of the Croatian Air Force’s Basic Officer Course, called the graduation day a significant one for himself and his entire family: “I made this happen with my hard work and good will. I started out as a civil pilot, but decided to join the Croatian Armed Forces because the career prospects there seemed more interesting and more challenging,” First Lieutenant Hrga said.