Back to homepage »
Share:
„In Operation Flash, which was crucial for the liberation of Western Slavonia, Croatian soldiers demonstrated strength and determination,” underlined the Minister of Defence Damir Krstičević, adding: “As a veteran of the Homeland War, I extend my appreciation to fellow veterans as well as to the families of fallen and missing Croatian soldiers for the freedom and peace we enjoy today. Croatian freedom was paid for with a huge sacrifice…” 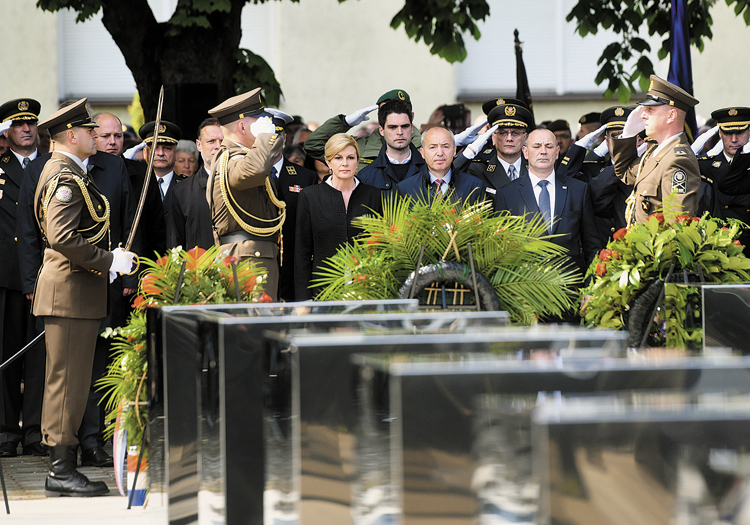 The 24th anniversary of Operation Flash and the subsequent liberation of occupied territories in Western Slavonia was formally marked in Okučani on 1st May.

The commemorative programme began with a performance of the Reveille by the Croatian Armed Forces Band on the streets of Okučani, which was followed by the opening of Homeland War veterans’ sports games, organized by the Brod-Posavina County chapter of the Association of the Homeland War Volunteers and Veterans. In the continuation of the programme, the course of Operation Flash was recalled, respects were paid to 51 Croatian soldiers who died during the operation and wreaths were laid in their honour by the memorial monument Crystal Cube of Serenity.

A joint wreath was laid by President Grabar-Kitarović, Parliament Speaker Jandroković, Minsiters Krstičević, Medved and Božinović as well as General Šundov. Another wreath was laid by the families of Croatian soldiers killed and fatally injured in Operation Flash, the representatives of Homeland War associations, war commanders of units that participated in Operations Flash, the Croatian Generals’ Association and the representatives of local authorities. After the Military Ordinary of Croatia Msgr. Jure Bogdan had said a prayer for fallen Croatian soldiers, cadets of the Croatian Defence Academy “Dr. Franjo Tuđman” and students of the Police Academy in Zagreb laid roses on the memorial monument.

A memorial service for military and civil victims of the Homeland War was served by Msgr. Bogdan and the Bishop of the Diocese of Požega Msgr. Antun Škvorčević at the Church of St Vitus the Martyr. An exhibition of war photographs by photographer Zoran Filipović, titled 1991, was on display in the crypt of the church.

President Grabar-Kitarović underlined that Operation Flash had set the ultimate liberation of occupied Croatian territories into motion. Therefore, its anniversary was an occasion to recall all deceased, fallen and missing Croatian soldiers with reverence, respect and dignity and to express empathy for their families.

Parliament Speaker Jandroković recalled the great, brilliant victory achieved by the Croatian Armed Forces and the Croatian police in Operation Flash. “The operation made it clear that the plan of creating Greater Serbia had failed. It paved the way for yet another brilliant victory in Operation Storm and the peaceful reintegration of the Danube river basin, a process through which the Republic of Croatia’s territorial integrity was restored,” Jandroković said.

Describing Operation Flash as crucial for the liberation of Western Slavonia, Minister Krstičević emphasized that Croatian soldiers had demonstrated their strength and determination in it: “As a veteran of the Homeland War, I extend my appreciation to fellow veterans as well as to the families of fallen and missing Croatian soldiers for the freedom and peace we enjoy today. Croatian freedom was paid for with a huge sacrifice.”

Krstičević recalled how the Croatian Armed Forces and the Croatian police, led by the country’s first president Franjo Tuđman, had demonstrated their readiness and ability to liberate the occupied territories during Operation Flash. He also pointed out that Operation Flash had been followed by Operation Storm, which had marked the end of the war in Croatia and had brought peace and freedom to the country. 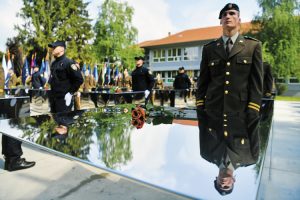 Throughout the day, visitors could tour a static display of the Croatian Armed Forces’ weapons, equipment and combat and non-combat assets or hear information about the military calling, study programmes at the Croatian Defence Academy (Military Naval Studies, Military Engineering, Military Leadership and Management) as well as voluntary military service. The programme also featured a demonstration exercise by the Special Forces Command, the Military Police Regiment and the Reconnaissance Company of the Guards Armoured Mechanized Brigade.

Society Hrvatski sokol (Croatian Falcon) organized a marathon from Nova Kapela to Batrina and from Novska to Okučani for the occasion, with the participants laying roses by the memorial monument Crystal Cube of Serenity. Simultaneously, motor cyclists from all over Croatia participated in a motorcycle parade appropriately named Flash.

Operation Flash began on 1st May 1995, when the Croatian Armed Forces and the Special Police of the Ministry of the Interior launched an attack on the southern and central part of Western Slavonia from Novska and Nova Gradiška. The Croatian forces’ main objective was to enter Okučani, the centre of enemy insurgence and terrorist attacks in Western Slavonia. The main force was made up of the 81st Guards Battalion, the 5th Guards Brigade as well as units of the 1st, 2nd and 3rd Guards Brigade. Those units were supported by reserve and Home Guard units, anti-armour mixed artillery units, the Croatian Air Force and the Special Police. The operation also saw first massive strikes by the Croatian Air Force. A surprise effect on the enemy was achieved with the transport of tanks to the battlefront by rail. In less than thirty-two hours, 7200 Croatian soldiers and policemen liberated 500 square kilometres of thereto occupied territory in Western Slavonia. After four years of occupation, Okučani was liberated and the Croatian forces regained control over the Zagreb-Lipovac motorway and the railway towards Eastern Slavonia.

In the liberation of Western Slavonia, 51 members of the Croatian Armed forces and the Croatian police were killed or fatally injured, while further 162 were wounded. During the operation, the enemy shot down an aircraft flown by Rudolf Perešin, a pilot of the Croatian Air Force who had defected from the Yugoslav People’s Army in 1991 by flying over Austria with a MiG-21 aircraft.