Back to homepage »
Share:
In early July, the Karlovac-Turanj Homeland War Museum was officially opened at the spot that served as the front defence line in 1991. Along with the renowned exteriror exhibition of heavy weapons, the preserved building dubbed Hotel California is home to probably the most contemporarily displayed interactive multimedia exhibition in Croatia… 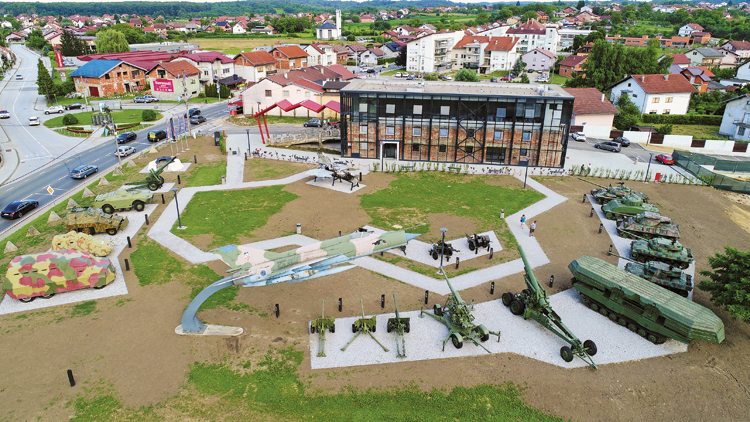 “The command of the Turanj bridgehead was located here in 1991,” recalls Colonel (Ret.) Dubravko Halovanić while pointing at an unusual “building within a building” – a fully pock-marked brick facility preserved in glass with a steel frame. The small surroundings of the building and the bridge over the Korana River behind it were home to various militaries for five centuries and played a pivotal role in warding off frenzied conquerors who wanted to seize and most likely completely destroy the city of Karlovac in central Croatia. “The Yugoslav People’s Army’s Operational Group 1 launched an attack on the Vojnić-Tušilović-Karlovac auxiliary line on 4th October 1991, with their final objective being to emerge on the Kupa River. However, they were stopped in this place. Later, members of the 110th Brigade and the 13th Home Guard Regiment fought here until Operation Storm,” relates Halovanić, a well-known actor in those events. I first met Halovanić in that same spot in late August 2002. Just two months earlier, he had transported articles of military equipment that he and his associates had collected since 1993 to the Karlovac neighbourhood of Turanj, although the idea that they should become exhibits, i.e. a testimony to history had taken hold after Operation Storm (August 1995). News of guns and tanks by the state road appeared in Croatian media in 2002. In spite of an explicit explanation that the disabled weapons served merely as exhibits, one could read comments that the weapons might scare off tourists who had just started returning to Croatia in large numbers. I asked Halovanić, an active duty officer at the time, about the future of the former weapons that could be easily seen by any passenger driving through Turanj down the D1 state road. The answer was: “Our goal is clear: we want this collection of exhibits to grow into the Homeland War Museum.” I received a similar response from the representatives of the local government. The inhabitants of Turanj I spoke with reacted favourably to the idea.

In the years that followed, I drove down the D1 state road through Turanj a dozen times, both for personal and professional reasons. I rarely pulled over and walked outside, but I would at least glance at the exhibits on an elevation every time. I would often spot a new exhibit. With time, I started noticing construction works on the aforementioned building, which Homeland War veterans had ironically dubbed Hotel California. Every time I looked, I saw a few tourists (at times, even a dozen of them) exiting their cars and buses so to as to survey the demolished buildings and exhibits. Naturally, they were not afraid, just curious. It is said that up to 50,000 visitors would stop by in the summer! However, no museum was in sight until recently, when the Karlovac-Turanj Homeland War Museum opened its doors on 5th July.

“In 2007, the city government adopted the decision to allocate the venue to the Karlovac City Museum for the presentation of the Homeland War,” says Hrvojka Božić, the museum’s director. She tells the story in a laid-back manner; the ribbon-cutting ceremony is behind her. The most important part for her was the public response, especially from Homeland War veterans, who played a pivotal role in the realization of the project. The process did not go smoothly or quickly, but that was the way it had to be. In 2008, Halovanić handed the collection over to the Karlovac City Museum. An expert team began devising a museological concept, while construction works at the location began in 2012. “We did not have difficulties only with finances; the construction and conservation works also required a lot of planning and efforts. Today, the building serves a dual purpose. On the one hand, it is an exhibit bearing witness to mindless war ravages. On the other hand, it is a framework for a contemporary museum story,” explains the museum’s director, leading the way into the building.

While Hotel California’s exterior appears wrecked and derelict, its newly-furnished, multi-storey interior is home to probably the most contemporarily displayed interactive multimedia exhibition in Croatia, a memorial room dedicated to fallen Homeland War veterans of Karlovac County, a multimedia room for seminars, conferences and occasional topical exhibitions, a library, a souvenir shop, etc. There is no point in talking about everything that can be seen, heard and read there. The most important things are the ones that you can be felt or recalled, the things that will bring one’s attention to the fact that one perhaps all too easily forgets a time and people that did not deserve to be forgotten. Many of those people hailed from Karlovac. “More than anything, I wanted to create a memento of all fallen Homeland War veterans from Karlovac and all of Croatia,” Halovanić told CROMIL’s team after the tour. He succeeded, together with all those who co-ordinated and participated in the project, from Homeland War veterans and witnesses of that time to expert museologists and historians. “We have put in a lot of effort into making the museum a showcase of the Homeland War the way it occurred here and in all of Croatia. The initial response has been positive. We are especially glad to receive response form young people,” adds Hrvojka Božić.

“The seed has been sown, it has sprouted and now must continue to grow and create conditions for enriching the exhibition,” says Halovanić figuratively as he observes the glass building and the exterior that he tenaciously “fed” with exhibits. “The museum is devised as a living tissue. It can be expanded, especially in the unlimited space of multimedia. Of course, working in a museum is not just about organizing exhibitions but also about gathering, restoring and protecting the exhibits and testimonies of the Homeland War,” Božić concluded.

After 17 years, I once again went off the D1 state road. This time, I was not just a curious spectator, but had a good reason to visit Hotel California. The prologue to the story about the Homeland War Museum was a lengthy one, but the first chapter is very promising. CROMIL’s team was quite impressed. The museum was worth the wait.

The Turanj complex has been on the Register of the Cultural Goods of the Republic of Croatia since 2013. Architects Vlasta Lendler-Adamec and Tatjana Basar of architectural firm Projektni biro 2A designed the building. The museum’s concept was devised by curator Ružica Stjepanović, while Nikolina Jelavić Mitrović designed the exhibition. The projects’ value is estimated at 26.3 million HRK. The City of Karlovac, Karlovac County, The Ministry of Culture, the Ministry of Homeland War Veterans’ Affairs and the Ministry of Regional Development and EU Funds financially contributed to the realization of the project.

Place of Learning about Homeland War

“The Museum is intended for domestic and foreign tourists, individuals and groups, people with varied degrees on knowledge about contemporary Croatian history. Our primary target audience are primary-school, secondary-school and university students. We want Turanj to be a place where they can learn about the Homeland War and study that time period,” says Hrvojka Božić, the museum’s director.

The museum is open from 8 a.m. to 6 p.m. from Tuesday to Friday and from 10 a.m. to 6 p.m. on the weekend. A single ticket for adults costs 60 HRK, while schoolchildren, students, senior citizens can enter the museum 30 HRK. Homeland War veterans are granted free admittance.