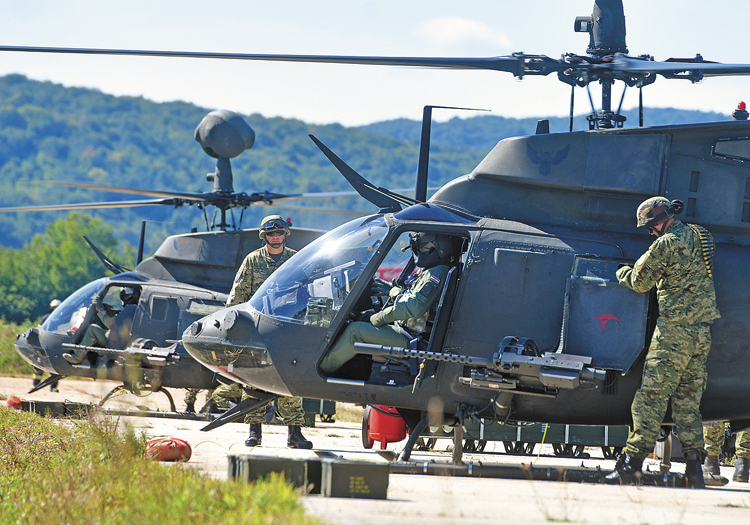 The “Eugen Kvaternik” military training range near Slunj hosted (OH-58 D) Kiowa helicopter live-firing and rocket launching in day and night time conditions, this time with the support from the Intelligence Regiment operating the Orbiter 3B unmanned aerial system.

The pilots of the 393rd Helicopter Squadron of the 93rd Wing of the Croatian Air Force in the “Pukovnik Mirko Vukušić” Barracks at Zemunik conducted refreshment training in live firing and rocket launching with Kiowa Warrior Helicopters against ground targets in day and night time conditions in the Training Range “Eugen Kvaternik” near Slunj from 1-5 September 2020.

The pilots have previously acquired skills to operate this type of helicopter, and by conducting combat shooting individually and in a team with two helicopters, they refreshed their combat capability.

The term “refreshment” refers to a part of the training aimed at maintaining the achieved capabilities, and this event justified it.

”Some of the pilots and combat training instructors have fulfilled the defined Full Combat Ready standards for any missions and tasks, to maintain readiness for day- and night time  live-fire inter-service exercises with other units of the Croatian Armed Forces in the forthcoming period”, said the training event Commander, Lieutenant Colonel Krešimir Ražov.

A small air base in the field

To execute combat operations of the kind a small air base was established at the Training Range, disposing with capabilities in accordance with previous preparations and with the development plan for the activities of the kind. “They imply created conditions for air technical maintenance and aircraft servicing in field conditions, command and control of the air space and field operations at day and night time.  A logistics basis is a crucial element for the efficiency, and therefore many segments are comprised in preparation and continuous support of the field small air base.

The operation of a “small air base” in combat operations depends on top preparedness and trainedness of all individuals, while Lieutenant Colonel Ražov commends the professionalism of the Croatian Air Force’s air technicians of all specialties, who are the critical personnel in the activities of the kind.

Orbiter 3B – live transmission of imagery

“Flying skills, the equipment and sensors in the helicopter become a part of you and you use them instantly, almost instinctively.

During the night time co-ordinated operation of the crew and the team is a rule, and the helicopter performs firing at low altitudes in terrain flights using night vision devices. With all this in view it is of critical importance to elaborate all procedures down to the tiniest detail to gain precision and speed in preparatory actions to minimise time constraint in decision making.  As  OH-58D Kiowa Warrior helicopters employ all their potential best in night time conditions, more than 80 % of flights are conducted at night”, says Lt. Col. Ražov, who also specified that other units of the Croatian Armed Forces perform their live-firing activities in night time, but only the 93rd Wing conducts activities of the highest intensity and ammunition consumption. 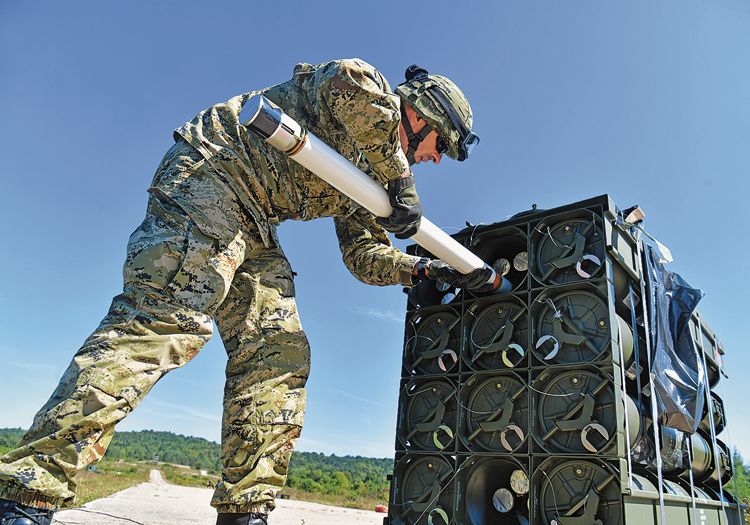 The Intelligence Regiment provided support (on the first occasion) operating the use of the Orbiter 3B unmanned aerial vehicle system. The system filmed the event in day and night conditions. The training activities were transmitted live in the Ministry of Defence and observed by the Defence Minister Mario Banožić, by the Chief of Staff of the Croatian Armed Forces Admiral Robert Hranj and by the Croatian Air Force Commander Brigadier General Michael Križanec.

The Orbiter system was transported from the Sinj Airport to the Training Range with a Mi-8 MTV1 helicopter, to further develop the capabilities in the operational use and deployment of the Orbiter and the use for the purpose of monitoring and analysis of the Croatian Air Force’s training activities.

The importance of engaging the Orbiter 3B in monitoring of live-fire activities rests in the integration of OH-58D helicopter and Orbiter 3 capabilities through a joint development of IMINT (Imagery Intelligence) and GEOINT (Geospatial Intelligence) capabilities of the 393rd Helicopter Squadron and of the Intelligence Regiment. It is followed by an analysis of the feasibility of real time precious evaluation and adjustment of the point of impact.