Back to homepage »
Share:
"We approach each of the many tasks assigned to our Squadron with utmost attention and responsibility. It is possible for us because we are highly trained and prepared, as proved by each successfully completed task, either in Croatia or abroad”, said Lieutenant Colonel Stjepan Stepić 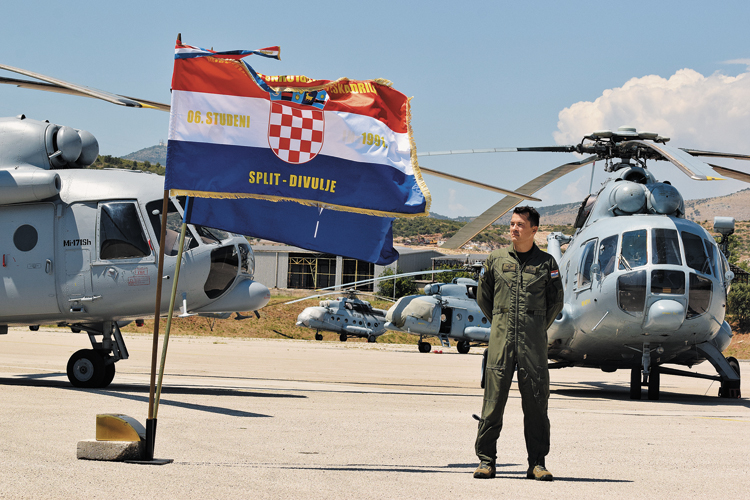 The Squadron Commander Lieutenant Colonel Stjepan Stepić, a pilot of the Croatian Air Force, with a rich professional and personal experience, says the successfully completed task is the most valuable recognition.

The Squadron is assigned with a variety of tasks. Some of them have major visibility while others are less known. Can you briefly describe your tasks?

The Squadron operates Mi-8 MTV-1 / T transport helicopters for tactical airlift, provides air support to other components of the Croatian Armed Forces, supports the Croatian Coast Guard in its tasks, conducts airborne landings, medical flights, takes part in ground and aerial search-and-rescue actions for military and civilian purposes, takes part in firefighting and airlift of fire fighter forces, provides support in KFOR Operation in Kosovo, conducts pilot conversion training and provides servicing and level 1 and 2 maintenance. It is a wide spectrum of tasks and each is demanding in its own way. It is a joint operation of pilots, who may be in the limelight, and of air technicians, flight support personnel, medical service and other members tasked with support to the Squadron.

You have been a member of the Squadron for more than 14 years, and most of your pilot service belongs here. Recently you have also assumed commander duty, and how do you see the Squadron?

Given the broad spectrum of tasks, the crews and pilots of the Squadron fit into the category “5 in  1” (test pilots, flight instructors, emergency medical transportation of patients, fire fighting, search-and- rescue, assistance to local community with airlift to/from inaccessible terrains).

Which of these is most challenging for young pilots, and what tasks you see as the most demanding?

As I said earlier, we are entrusted with various demanding tasks, and when young pilots are assigned to the Squadron we refer them for solid conversion training to prepare them for any tasks of the Squadron.  Daily schedules are unpredictable for any member of the Squadron. They can remain on duty, or can be dispatched to execute a medical flight, a search-and-rescue mission, to an assistance flight during the firefighting season or other tasks in support to other components of the Croatian Armed Forces.

Will the Squadron be included in the new project of equipment with UH-60M Black Hawk helicopters?

We have been included into the project from the beginning and a member of the Squadron completed the required training  in the 194th Squadron based at Lučko and will soon attend the conversion training in the United States.

I expect that more pilots will decide to take conversion training in the United States next year, and to operate the new multi-role UH 60 M helicopter in the 194th Multi-role Helicopter Squadron at Lučko (Zagreb).

You are a flight instructor and captain of the Mi-8/17 / 171Sh / MTV-1 helicopter. Is there a difference in operating these models?

The three helicopters are of the Mi-8 family, and while there are some differences, the flying technique is the same. Our policy is to have all pilots assigned to our unit undergo conversion training on a Mi-8T helicopter, followed by advanced training for special tasks on Mi-8 MTV-1 helicopters, whose pilots are trained for transporting external load, fighting wildfires, rescuing people from inaccessible terrains and other tasks performed by the Squadron.

You graduated from the Command and Staff School of the U. S. Air Force. What is your best impression?

I attended the SRI Air Command and Staff College of the U.S. Air Force Air University, and my study period was most dynamic, substantial and interesting.

We familiarised with the joint war operations at the operational level, with multi domain operations (combining earth, air, water, space and cyber dimension, and the use of artificial intelligence in the planning and conduct of war operations.

Meeting and working with students from NATO nations and partners makes an invaluable experience. The environment and the experience broadened my horizons and also deepened my knowledge.

I built on my international experience gained in international peace missions and operations. The College offered a wider insight into the way our partners train and made friendships I cherish as a lasting value.

You took part in five NATO-led missions and operations. To what extent is the international experience useful for the career?

My first international experience was in KFOR in 2013, I was engaged as a flight security officer and helicopter pilot, and later I served three more terms as commander of the aviation component and commander of the Croatian contingent.

Based on my experience the pre-deployment training is of respectable quality and the Croatian participants in missions are well- trained and equipped. Only when deployed abroad and testing abilities in different settings you can objectively judge your competence in comparison with international partners.

And this is not a subjective view, as other nations have stated their recognition, and each time I felt glad and proud to be a member of the Croatian Armed Forces. It was so in Resolute Support mission in Afghanistan too, where I noticed many times the respect from the part of the partner nations for our knowledge and abilities.  During a deployment in Afghanistan I was an instructor to the pilots of the Afghanistan Air Force, and flight security officer in the 311th Air Expeditionary Advisory Squadron. When my term ended, I received their a traditional costume passed on through  generations and guarded from Afghan trainee in sign of gratitude, which is passed down from generation to generation and is not shared so easily, which was actually his greatest sign of gratitude and recognition for my efforts.

The 395th Transport Helicopter Squadron performing emergency medical flights is the last recourse for some people, particularly islands residents. What does it feel to know you are saving someone’s life and does it inflict additional stress on you?

The 395th Transport Helicopter Squadron is on duty for 24-h for seven days a week throughout the year. We conduct various tasks through day and night duty periods; when we receive an emergency medical transportation assignment our main concern is to execute the assignment safely within the shortest time possible. We are accompanied by a medical team of the Emergency Medicine Institute of the Split-Dalmatia County, and we know they provide the best possible medical care for the patient.  It is far easier when the weather conditions are fair, but it is sometimes conducted in adverse conditions and at night time, when you have to decide whether you can take off and execute the task safely although the patient’s life may depend on your decision. In such cases each of us does his best to ensure maximum safety of the crew and the patient.

Which medical flight you remember the best?

Each flight is important in its own way and it is not easy to single out any. We transported pregnant women and injured patients, and also patients infected with COVID-19 and each flight is a unique experience. The biggest reward is when it all ends fine and you realise that you have helped someone. Many times the people we helped contacted us later to express gratitude, and those are often very touching situations. I remember a situation where a boy was bitten by a viper in one of our islands. We found him passed out and bleeding, and his parents took him to the vehicle and to the airfield; they had blood stains on their clothes and were very frightened. The medical team aboard the helicopter did their best to resuscitate the boy. In situation of the kind you are aware of the drama going on in the helicopter behind your back and you cannot remain indifferent. The boy recovered fully and his family visited us later to thank us. Such moments leave us very happy and proud to have chosen a career which allows you to help people.

Unlike emergency medical flights, the search-and- rescue flights are conducted because of recklessness of tourists unprepared for the walks they take, usually in mountains. Does the Squadron approach differently to the two types of interventions?

In search- and-rescue situations we act upon assignment and firstly we have no information about the cause or the condition of the person we are searching for. Most search and rescue tasks are performed jointly with experienced members of the Croatian Mountain Rescue Service, with whom we have co-worked for years. Upon the receipt of the order we prepare so as to complete the task the best way we can, and on arrival to the spot the crew and the captain assess the situation and decide on the feasibility of the operation, and if there are no obstacles they carry the task out using the best tactics and technique.

Based on my experience search and rescue tasks are sometimes easy but also pretty complex, as they are mostly performed in mountains or at sea. For that reason we practice tactics, techniques and procedures throughout the year to be able to do our utmost in a real situation.

Sometimes we get dispatched to do a search- and-rescue task after a series of demanding tasks through the day, to search for somebody in highly adverse weather conditions, and we do our best and find the lost person, ill-equipped and prepared for the walk in the mountain, and the person just jumps in and out the helicopter unassisted and without injuries, it is a frustrating situation, because your spent both human and material resources without real need. Of course, it is not our task to assess the request, we just fulfil the order we get, and it is our side of the story.