Back to homepage »
Share:
Our mission is to send the message to the audience that soldiers, despite the highly regulated and strict lifestyle they follow, are living people who have individual musical tastes, who listen to various music styles and that military orchestras can and must represent it all 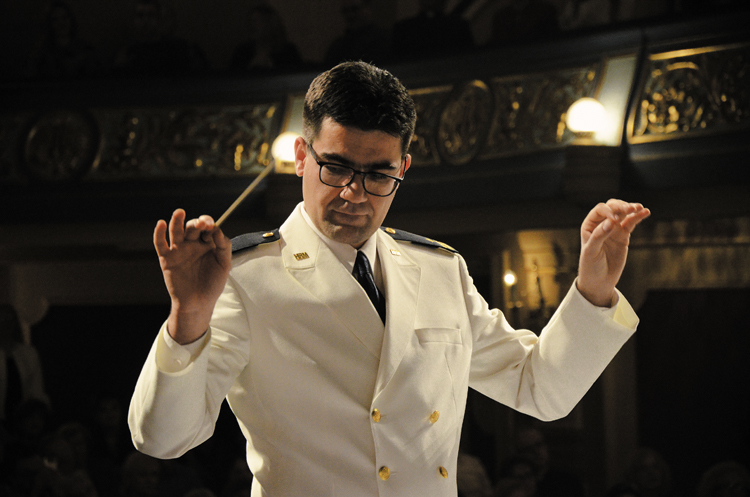 Maestro Tonći Ćićerić has conducted the Croatian Navy Orchestra since 2012. He graduated from the Academy of Music in Zagreb (the trombone class, but also received education in conducting. He had cooperated with the Croatian Navy Orchestra, where he also did military service, and with the Croatian Navy’s Vocal Ensemble “Sveti Juraj” , and also conducted the orchestra of the with the Marching Band “Zvonimir” in Solin, where he founded the music school and worked as teacher. Maestro Ćićerić is also a composer, a producer and a researcher and he conducted various orchestras and ensembles. He received several national and international recognitions and awards. In his life dedicated to music Maestro Ćićerić has been researching military music, also in his doctoral thesis.

You have been the conductor of the Croatian Navy Orchestra for eighth season already, who has studied and lived music for decades. What is Your view about the role and perspective of military music?

I think that the performances of military orchestras are the best opening of armed forces to the general public. In the past military orchestras performed only military music – marches and reveille songs, while modern military orchestras perform various different musical styles. When we listen to the performances by the military bands, the cliché of military orchestras as ensembles dedicated exclusively to rigorous march-like structures disappears. Our mission is to send the message to the audience that soldiers, despite the highly regulated and strict lifestyle they follow, are living people who have individual musical tastes, who listen to various music styles and that military orchestras can and must represent it all. When I enrolled in the graduate study programme in ethnomusicology in 2012, my intention was to give a personal research contribution to deeper knowledge of Croatian military music. Ethnomusicology is often wrongly associated with traditional music, but modern ethnomusicology, which features a strong anthropological dimension, studies each music style within a social and historical context and its role in the life of its environment. The Croatian military music I think also deserves a serious research approach.

How much we know about military music, in particular in Croatia?

Seen historically, military music in Croatia, in particular in Dalmatia, can be traced back to the ancient times, through the military history of the various civilisations that had once lived in this area. There are funerary monuments of military musicians from the ancient Rome preserved near Solin, depicting the instruments they played and the reputation enjoyed within the military. Military performers were directly subordinated to the office of the imperial governor, i. e. just below the top of the chain-of-command. The historical sources from the times of the Venetian, the Turkish and Austrian rule reveal continuous military music tradition, up to our times. All states that existed throughout 20 century in Split, for example, had military bands, as was the case of sovereign Croatia too. As early as in September 1991 the Croatian Navy Orchestra was established, and performed Croatian composers’ pieces at the concert on the occasion of the international recognition of the Republic of Croatia in the Croatian National Theatre in Zagreb in January 1992, before the Croatian government authorities and foreign diplomats.

Do Croatian military bands stand comparison to the bands of foreign countries and of today’s armed forces?

The tradition of military music in Croatia is on equal terms with other countries in Europe, but it has not been given much research focus.  The very existence of vocal ensemble – the Croatian Navy’s “klapa” – places Croatian Armed Forces among the few militaries who had introduced the specific people’s musical expression into their military system. There are very few such militaries.  The traditional expression of the kind is found outside the NATO circle, in eastern countries. Russia nurtures it, for instance, and its military bands perform on traditional instruments, and have introduced dancers, Cossacks, which is mainly the legacy of from the Soviet Union times. It is a rarity for the western countries, except the militaries with bagpipers, such as Scotland in the UK’s armed forces, and some Baltic countries. At the global level the traditional elements of the military music makes Croatia singular and make it recognisable, particularly with the combination of the Croatian Navy Orchestra and Vocal Ensemble, who have over a decade-long intensive co-operation created a new and specific musical style.