Back to homepage »
Share:
The medical flight teams, composed of medical doctors and nurses and paramedics of the Croatian Armed Forces and a crew of the 91st Air Base of the Croatian Air Force guard duty throughout the year in the island of Krk 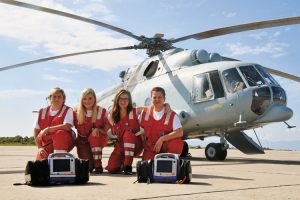 The medical flight teams, composed of medical doctors and nurses and paramedics of the Croatian Armed Forces and a crew of the 91st Air Base of the Croatian Air Force guard duty throughout the year in the island of Krk, transporting urgent patients from the islands of Cres, Lošinj and Rab and from the town of Gospić to the Delta Helidport in Rijeka. The purpose of the medical flight teams is to be available to the islanders who would othervise hardly arrive to the University Hospital Centre in Rijeka within the golden hour critical for survival in urgent cases.

“We are the vital connection for our islands residents. We change people’s fate when an accident occurs. We speed up transportation, medical assistance and hospitalisation“, say the members of the medical teams of the Croatian Armed Forces based in the Rijeka Airport in the island of Krk. “The medical officer is also the team commander The pilot is responsible for flight safety during the transport and the physician is responsible for the patient and his/her health condition during the flight. The phyiscian can suggest to bring a person (a parent, a spouse, police officer or civilian emergency team. and can also request urgent landing in the event of complicated condition or ask the pilot to keep the altitude at up to 100 m if transporting a  a diver with decompression symptoms”, says Brigadier General Boris Zdilar, Medical Advisor to the Chief of the General Staff of the Croatian Armed Forces.

Eight teams (two medical teams per week) take turns in the Rijeka Airport (situated in the island of Krk) over a month time, in accordance with the assignments in the unit. “The shifts last for 12 hours. We are constantly stand-by because we need to be aboard a helicopter within 15 minutes after the receipt of the emergency call. When an emergency medical flight is requested, the flight crew acts first – the pilot, the co-pilot and the air technician, checking for clearance and the weather conditions. Then the medical team inquires about the patient. We sometimes receive concurrent calls and have to attend to more than one intervention. Upon landing the physician inquires about the patient condition and the paramedic prepares the patient for transportation. During the flight we monitor the patient’s vital functions, prescribe therapy, ake medical history and chart medical record”, explains 1st Lieutenant Tena Damjanovic, a physician and a member of the medical team.

The military medical team have been engaged since 1 May 2016, which was a very good decision, say all team members.

“The purpose of the medical flight teams is to be available to the islanders who would othervise hardly arrive to the University Hospital Centre in Rijeka within the golden hour critical for survival in urgent cases. Each citizen of the Republic of Croatia needs to have equal access to urgent transport to the hospital”, said another medical officer, 1st Lieutenant  Ema Ormanec. As many as 892 patients have been provided medical assistance within the 2.5 year engagement of the military medical team.

“Behind each of the 892 patients is a unique story. It is important that all ends well. Our statistics reveals we saved all of them. I recall as particular a case of the prematurely born infant from the island of Rab, born in the 23rd week of pregnancy. The boy was born in the bathroom, we resuscitated him and brought to hospital alive thanks to our intervention and tis progressing well today. Other infant patient was a little girl born on board of a helicopter on the Assumption Day”, recalls Captain Valentina Malović, a nurse.

“We are used to operating in harsh conditions; what is important is a good teamwork so that the patients in need of emergency assistance really receive it. Without our teams they wouldn’t get it“, says 1st Lieutenant Damjanović.

During the summer season they also take care of the tourists.

“It is well known by now – we deal mostly with British guests in June and September, with the Czech, the Hungarian and the French guests in July and with Italians in August. They have to apply creativity  and mobile phones to get information from the patients who do not understand English. It is crucial to do as much as possible within 20 minutes – the duration of the flight from the island to the University Health Centre in Rijeka“, says Cpt Malović

Before taking the duty in the Croatian Armed Forces and in the ward rounds in the Rijeka Airport the military physicians take the internship in the Clinical Hospital “Sveti Duh“ and partially in the Clinical Hospital Centre “Sestre milosrdnice“, in the Institute for Emergency Medicine in Zagreb as well as in military outpatient clinics. We spent long time in the gynaecological ward of the General Hospital “Sveti Duh“ to prepare duly for possible deliveries on board of helicopters, as many emergency patients are expecting women. We also cherish the practice at the paediatric ward. Learning to treat children. We also take advanced emergency medicine courses with  international certificates.