Back to homepage »
Share:
Through the mastering of advanced naval skills, the Naval Infantry Company members have to continuously build physical and psychological strength as well as develop the most important characteristics: endurance, persistence, courage and resourcefulness. The unit saw its formal presentation in the Barracks "116th Brigade of the Croatian Army" in Ploče, within the programme marking the Croatian Navy Day 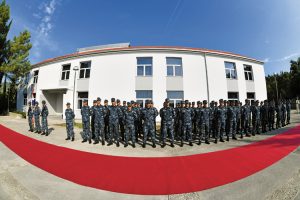 The analysis of the development of capabilities for the defence of national interests of the Republic of Croatia in the south revealed the need for a permanent outposting of an operational unit capable of fast intervention in the event of an increased threat to the civilian population, the sovereignty and territorial integrity of the Republic of Croatia, as well as of assisting the population hit by natural and man-made disasters. This led to the establishment of an active naval infantry duty permanently based in Ploče, reviving a capability of the Croatian Navy that was suspended in 2000 within the overall downsizing of the Croatian Armed Forces, and to the installment of preventive measures aimed to ensure a stable and secure environment in the south of Croatia.

Mission and purpose of the Naval Infantry Company

The exercise of  the capabilities of the Naval Infantry Company takes highly trained and equipped quick forces ready and capable of providing immediate response. The countries with indented coastline attach due attention to the building and maintenance of naval infantry and landing operations.

Through its regular activities aimed at capability building and maintenance, the Company will ensure the implementation of measures of the defence system and, if necessary, will secure the military facilities,installations and forces in terrain conditions (outpost, firing positions of mobile coastal launchers and forces in field disposition) and conduct the training of the non –assigned reserve component, with the objective of attaining full capability for the naval infantry tasks. Its forces will provide support to civilian institutions and the population hit by natural and man-made disasters as well as secure the temporarily prohibited or contaminated zones.

The forces will also be engaged securing key facilities and infrastructure in the coastal area, ports for deployment of the Croatian Armed Forces, vessels in the harbours and at berths outside the base area and commands at increased threat levels. 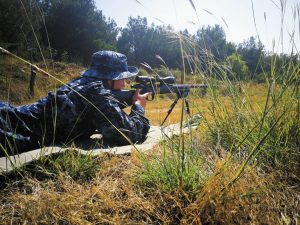 Given their high mobility and autonomy and in compliance with the territorial disposition, the forces are assigned the capability of timely adequate response pending the moment of the engagement of other elements of the homeland security and defence system.

In addition, the Company will also provide security of the main forces in defensive operations and the capability of swift and limited-range operations against facilities, port installations, vessels and other key objects.

The analysis of all preconditions, in particular the geographical specificities of the Dubrovnik-Neretva County, suggested a Naval Infantry Company as the best solution to address  potential security challenges. The Barracks in Ploče had been abandoned and needed renovation and placing into function again for the accommodation of members, the storage of equipment and supplies and for training activities. The placement of an active company as the southermost unit of the Croatian Armed Forces in Ploče, in a barracks situated near the port and land and maritime communications junctions was seen as an optimal solution. Its capacity fully met the need for accomodation of  the entire active component of the Naval Infantry Company.

An important contribution in the establishment and training of the Company was provided by the members of the former 53rd Battalion of the Naval Infantry Battalion and 352nd Diversionist and Diver Battalion.

The Company is composed of three infantry platoons, a Support Platoon and a Recce-Diver Squad, alongside an optional engagement of assigned reserve.The overall size will be 158 members, which are to be attained  partly through the reassignment of the Croatian Army personnel and partly through recruitment.

In compliance with the Training Doctrine of the Croatian Armed Forces, the principles of combat-focussed training, the standards which are to be attained and the upgrade of psychological and physical fitness, the overall objective of the training for the naval infantry unit  is to enable the trainees to acquire expertise, abilities and skills required to fulfil tasks in any operating conditions. 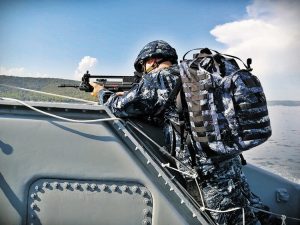 The focus of the training was placed on the conduct of naval and air (helicopter) landing, live-fire and situational firing in various conditions, the training of combat divers, endurance training, the use of communication equipment during combat, the acquisition of naval skills and tactical training in adverse conditions. Attention is also paid to the upgrade of motor skills of the members of the Company.

The training of the Naval Infantry Company took 12 weeks (from 11 June to 31 August)  through three modules  – refreshment of basic military skills in the first module, specialist and individual tasks and practice work in complex conditions of  sequential training, situational firing and live firing with infantry weapon systems in the second phase, and final evaluations in the third training phase.

The specialist module comprised the training at sea, the acquisition of basic naval skills, infantry arms and firing practice, helicopter and naval landing and a situation exercise (SITEX).

The activities at sea encompassed the conduct of landing operations using small rubber boats, reconnaissance and seizing resistance points in the disembarkation area. The training in basic naval skills, focused on proper conduct of landing operations, comprised the upgrade of navigation skills, maintenance and handling of rubber boats. The training was administered by the instructors of the Intelligence Division and of the Croatian Navy Training Centre. The training in infantry weapons and firing tasks covered tactical-technical features of the weapons, the purpose and the function of individual components, the removal of haults, stockage and the maintenance of weapons in various situations. In the firing module, the trainees practiced correct, swift and skilled use of fire weapons. In addition, the trainees learned to use the naval infantry-specific tactics, techniques and procedures autonomously and within a squad, at day and in nighttime in various combat situations.

Situational exercises were conducted under the expert guidance of the Intelligence Division and Special Forces Command. Their objective was to integrate the individual lessons learned into more complex ones and to test the trainees’ ability to plan, prepare and conduct overcoming water obstacles by swimming, by rowing, and by helicopter. The training goal was a realistic and immediate assessment of the adoption of content, strength and endurance.

The Situation exercise SITEX 1 was conducted within the training at sea, with the aim to test the capability to perform a tactical task at a position reachable upon the crossing a water obstacle (by rowing and swimming). The exercise combines the adopted contents from naval navigation, the use of neoprene rubber boats, combat swimming and tactical action on the shore. 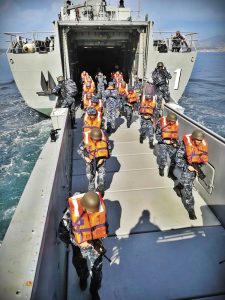 The Situation Exercise SITEX 2 integrated the acquired skills of use of landing crafts, rubber-neoprene boats, combat swimming, free diving and tactical action on the coast. The members of the Company were assigned the role of combat team with two tasks: lift to the area of operations by landing craft, infiltration to the area of operations by swimming and in kayaks with the task of establishing reconnaissance of the landing area and blocking road communications to prevent the opposing force from bringing in reinforcements,  lifting  to the operations areaby landing craft, embarking into small rubber boats, disembarkation into the area of operations and seizing the enemy’s operations-communications centre and arms depot. Once the task was completed, the Company was to exfiltrate and return safely to the base.

The capability evaluation is a constant process during the training programmes. During the exercise, the instructors were asked to survey and document the actions, behaviours and commitment to the tasks. By mastering complex maritime skills, the members of the Naval Infantry Company need to continuously build strength and develop the essential skills – endurance, persistence, courage and resourcefulness.

In the forthcoming period, the focus will be placed on the training for specialities and on the development of tactical procedures as well as on the constant efforts to upgrade and maintain the attained capabilities. The Company will use the designated field equipment for combat and non-combat environments, in compliance with the unit’s missions and tasks. The Company will use the landing craft-minelayer and assault ship that meet the requirements of manoueuvre and support to naval infantry.

During the Homeland War the main unit providing this capability was the 53rd Naval Infantry Battalion. The former membersof the Battalion (presently serving as active duty personnel in the Croatian Navy) took an active part in the establishment of the Naval Infantry Company and in the training of its personnel, incorporating their experience from the Homeland War.

The first formal line-up of the Naval Infantry Company took place in the Barracks “116th Brigade of the Croatian Army ” on 14 September 2018, as part of the programme  marking the 27th anniversary of the Croatian Navy.  The Commander of the Company, Captain Branimir Todorić reported to the President of the Republic as Supreme Commander.