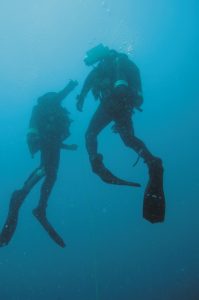 After conducting the training at the Training Center at the Croatian Navy’s Training Department, the Mine Guard Team received nine new members. The selection training lasted for16 weeks, and  concluded with a demonstration exercise conducted in the waters surrounding the Navy Barracks “Fleet Admiral Sveto Letica-Barba” on July 2018  as an examination activity for the new generation of counter-mine divers.

“This is a first course of the kind. It tests both physical and  psychological readiness given the nature of the duty (handling mines and weapons) and the stress implied.  The Course supports the implementation of Capability Target– “Mines and underwater IED Clearing in Ports and Waterways“ assumed by the counter-mine diver unit, whose members will take part in operations with Allied forces.  Likewise, counter-mine divers can also be requested to assist the civilian institutions, to clear mines from the world wars I and II and in search-and-rescue actions“, says the Commander of the Croatian Navy Training Centre Captain (N) Ivan Vuković.

The candidates took a three-module training,  performing tasks from the simplest to the most complex ones. 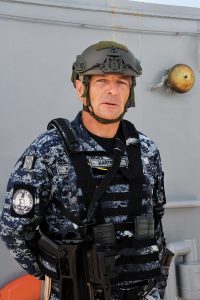 “The Diver Training Department is also administering a five-week Basic Diving Course for seven candidates – five members of the guards brigade and two members of the Croatian Navy. The Course brings diving closer to them and opens their career as scout divers.  Our objective is to train a significant number of scouts to dive ; the Course is hard and demanding, involving 30 practical and two night dives; the trainees also learn maritime skills –boat riding, operating the diving  compressor and the like“, says Head of Diver Training Department, Lieutenant Commander Boris Kartelo.

“A high-level approach to the training is a must, mistakes in counter-mine diving,are fatal“, says the Head of the Diver Training Section, Lieutenant (N) Sergej Kozmi, who underlines that the main authority in the practical training of countermine divers is Senior Chief Petty Officer Nikola Restović, the longest-serving NCO of the Diver Training Department. 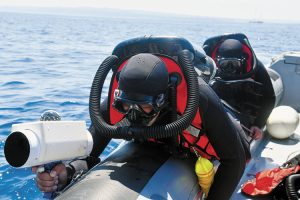 The candidates were obliged to undergo medical examination for divers, which screens a certain number out, followed by the initial free diving.,  SCUBA diving. In the first part of the first module the divers perform 25-m dives and in the second 50-m dives respectively. The entire team  took a 3-week field training in the islands of Mljet, Lošinj and in the Training Range “Cerovac”, testing their performance of transportation, equipping, addcomodation and daily tasks and within the team. “The first module comprised daily physical training and all diving activities (day and nighttime diving, deep-sea diving, orientation diving, long dives, “open water“ diving, communication tactics and procedures and raising the loads from the seabed.

The training with SCUBA included 40 dives and lectures by medical doctors and intructors of the Diver Training Department, and in the second module  the candidates took intensive practice with the Semi-closed Rebreather Diver“, says Lieutenant (N)  Kozmi. It is the French Aqua Lung’s DC55, a “highly robust and reliable mechanical apparatus  for counter-mine diving which operates by the principle of constant volumes, and has been long in use in the Croatian , French, Spanish, Indian, Portuguese, Slovenian and other navies, says Lieutenant Junior Grade (N) Tino Mrčelić. During the training for ARAM DC 55 the candidates were expected to acquire the techniques of maintenance and preparation of the apparatus with various mixtures depending on the deepest intended dive.

The second submodule contained dives using the mixture of Nitrox 32% and oxigen, which requires different preparation of the apparatus, using the injectors to enable divers to go as deep as 45. The third module  – dives with two different gas mixtures – is referred to as “technical diving“ . The apparatus prepared has the operational depth of 55 m, diving becomes  complex and requires high concentration and fitness. The diving is preceded by a written exam. 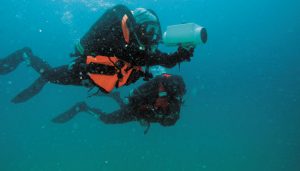 “The candidates have performed 30-40 dives using the Semi-closed Rebreather Diver in each sub-module, and six dives more in the third sub-module  – a total of 90 dives during the  whole training.  For reference – military divers perform approximately 100 dives a year on the average“, said Lieutenant Junior Toni Mrčelić. In addition to diving the candidates mastered handling of special tools and devices used in counter-mine search and neutralisation. They performed dives with aspecial diver-held sonar used for easier detection of underwater objects and mastered handling of the Mark V/Orca underwater ordnance disposal system donated to the Croatian Navy by the U.S. Navy in 2013. “The course provides concrete knowledge and skills applicable outside the military too: medicine, diving, riding the rubber boats. During the four months we were taught by the best instructors of the Croatian Navy, who passed on their enviable expertise in military diving and counter-mine warfare.The  beginning was the hardest part; we were required to quickly master many knowledge and skills, ranging from maritime navigation, counter-mine warfare, explosives and medicine. We have learned all the matters and are ready to apply it in our future work. The future members of the Platoon were bound in togetherness and the competitive spirit “, said Ensign  Alen Suša.