Back to homepage »
Share:
The 23rd and 25th generation of flight cadets is currently being trained at Air Base “Lieutenant Colonel Mirko Vukušić” in Zemunik. They are joined by the 6th Generation of members of the Croatian Armed Forces who are being trained within the programme Beyond Project Cadet. We present their life and work inside the air base… 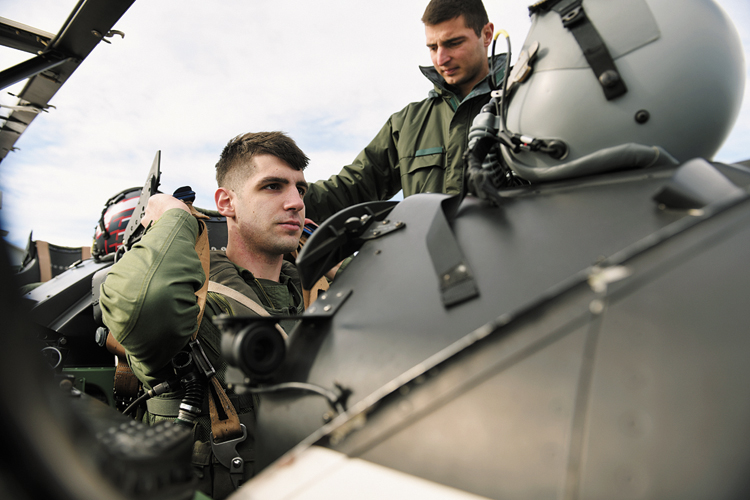 A long, infinite runway and five or six aircraft on it. Two or three men are employed around each aircraft. The previously announced bad weather has bypassed Zemunik. Everything is ready for take-off. Young men begin walking towards the runway. In a few moments, some of them will get inside the aircraft and soar into the skies. What makes these young men distinguishable is the fact they are not officially full-fledged pilots yet. The 23rd and the 24th generation of flight cadets make up the majority of the group; the rest are members of the Croatian Armed Forces who are being trained to become military pilots within the programme Beyond Project Cadet.

Each of them has their reasons for choosing the calling of a military pilot. Some have dreamt about flying since they were children, while others chose that career path after meeting officers from the Croatian Air Force in their senior year of secondary school. One thing they all have in common, however, is the wish to spend their lives doing the job they like. “For me, being a pilot is the best job in the world. Out of eight working hours, we spend three hours in the air, having fun while looking at the clouds above and the islands below,” Private Bruno Bulum tells us in a single breath.

The cadets of the 23rd and 24th generation did not learn how to fly an aircraft right away. First, they had to finish a five-semester undergraduate study programme in Aeronautics at the Faculty of Transport and Traffic Sciences in Zagreb. Afterwards, they proceeded to the Pilot School of the Training Centre “Rudolf Perešin” in Air Base “Lieutenant Colonel Mirko Vukušić” in Zemunik. After initial training on the ZLIN Z 242 L trainer aircraft, they were allocated their aircraft type. Those who were allocated a helicopter had to train on and get used to a new type of aircraft; no easy task since the differences between a helicopter and an aeroplane are significant. “The helicopter is much more unstable and tumultuous, so the piloting technique is more pronounced in it,” Cadet Luka Hrga, a future pilot on the Bell 206B helicopter, tells us. His colleague, Cadet Domagoj Mandić adds: “The technique of steering a helicopter is certainly more demanding. However, stunts can be flown in an aeroplane and these elements require precision.” 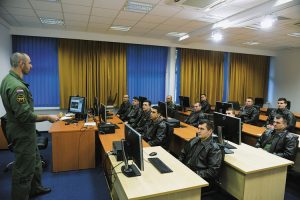 Student pilots in the programme Beyond Project Cadet can join the training by applying to an internal job posting within the Croatian Armed Forces. Before their initial training on the ZLIN Z 242 L aircraft, they have to pass a medical examination, selection flying, a camp and 14 exams in courses on general aeronautical theory at Training Centre “Rudolf Perešin”. Although they are already a part of the military, they are beginners in flying, much like the cadets. They therefore have no advantage over the cadets, but are on equal footing with them.

The training for future helicopter pilots is divided into sections during which they should accumulate 200 flying hours. They master the technique of steering a helicopter in Basic Flying, while they perfect their skill of flying from one point to another in a given timeframe during Air Navigation. The pilots are taught to fly without looking outside the helicopter, relying only on the flight controls in the cockpit, during Basic Instrumental Flying. They get used to flying in the dark during Night Flying and try out flying the lead plane and being a wingman in a helicopter formation during the Formation Flying section. These sections are followed by Advanced Instrumental Flying and Advanced Flying, which include flying on small altitudes and flying with external store. The training is rounded up by NVG Flying (flying with night vision goggles).

The training of future aeroplane pilots is also divided into sections during which they accumulate 150 flying hours. Just like their colleagues in helicopters, they also practise flying from one point to another in a given timeframe during Air Navigation. This section is followed by Instrumental Flying, when future aeroplane pilots are trained in flying in bad weather. The penultimate section is Formation Flying, where pilots are first taught to fly in a pair and then in larger formations. The training on an aeroplane ends with the drilling of tactics. At the end of each section, the future pilots fly a check flight, a solo flight and a test flight.

Head instructors and their deputies plan every step of the training. But, they do not just plan the activities within each section; they also plan the pilots’ every-day activities. They plan the pilots’ progress and decide which activities the pilots will be engaged in every day. The head instructors were once cadets themselves, so they know what they are feeling and what they are going through. We ask Lieutenant Colonel Domagoj Nekić, the head instructor of the 23rd generation of pilots on the Bell 206B helicopter, to compare his generation with the one he is currently instructing. With a smile, he says: “They have it nicer and easier than we did.”

The head instructors are assisted by flight instructors. These first demonstrate a move to the cadets and then guide them as they master the move. With time, the cadets become more independent, so that the instructors’ role is reduced to correcting them and advising them. 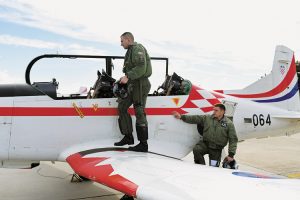 CROMIL’s team met the cadets of the 23rd and 24th generation at the start of a new workweek. The sunny Monday began with classes in modern, computer-equipped classrooms at the Training Centre. Lecturers and instructors from the Training Centre’s Pilot School hold the classes in the air base, while lecturers from Zagreb communicate with cadets via video link. Of all the classrooms, the one that piques the students’ interest the most is the classroom where an OH-58D Kiowa Warrior helicopter simulator is situated. Although that simulator is primarily used for technicians’ training, future helicopter pilots are taught the skills of a co-pilot and pilot in it.

The lectures are followed by fitness training. The cadets have a sports hall, a gym and outdoor sports facilities at their disposal. Their training programme is planned out by Captain Goran Cerovečki, the Kinesiology Officer at the Training Centre. The muscles of the torso and the neck are paid the most attention to in the fitness programme for these are the body parts that are most under pressure during a flight. “Our goal is for the cadets to reach a level of readiness and maintain it throughout their schooling,” Captain Goran Cerovečki tells us. “When they become pilots, they should be capable of training and maintaining the compulsory level of physical readiness on their own.”

The cadets exercise three or four times a week, while their physical readiness is tested twice a year. In this way, they are being prepared for their future careers, when they will have to go through regular mental and physical examinations.

The most important part of the day is the flight preparation. The cadets withdraw with their instructors to a methodical room (the so-called box) in the buildings of the Aircraft Training Squadron and the Combat Helicopter Squadron, where the instructors explain to the cadets what the flight should look like.

Although the cadets are free to enjoy their hobbies in the afternoon, they spend that time doing homework, going through notes from previous flights and preparing for the next day’s flight, which can take up to a few hours. “We are all perfectionists and strive towards perfection. We pay close attention to details when preparing for a flight because there are many elements that we have to take into consideration,” says Second Lieutenant Martin Škrtić when describing the preparation. He is training to become a pilot within the programme Beyond Project Cadet.

Although each of them flies solo, the cadets best prepare together. They spend their free time exchanging experiences, comparing notes and thus making progress together. “Team work makes training much easier. None of us has anything to gain if we all mind our own business. The best way that we can prepare for a flight is by talking to one another,” Private Bruno Bulum says. “When we help each other, the training flows more easily than when we do something on our own.”

After the preparations, the cadets dedicate their free time to their interests and hobbies or go for a walk around Zadar. However, they do not stay out too late. The night before the flight, all of them are in bed by 10 p.m.

Tuesday is the first flying day of the week. CROMIL’s team met the soldiers and their flying instructors in the boxes, where the cadets’ knowledge of the subject matter from the previous day was examined. All cadets and flying instructors then gathered at a briefing, where they received the weather report and defined the flying schedule for the day. Before their flights, the cadets went through a mandatory medical examination, where a flight surgeon took their blood pressure and checked their general health status. The flying lasted all morning long. A maximum of two cadets were at once in the air and they flew to various locations, from Dugi otok to Osijek. Later, the cadets and their flight instructors analysed the flights. “Our instructors demand more of us and we also learn something new with every flight. The amount of preparation and hard work needed for each flight increases with time, but we master it all during the training. There is always something more difficult, but also more fun awaiting us,” says Cadet David Knežević from the 23rd generation, who is training to become a military pilot on the Pilatus PC-9M aircraft. 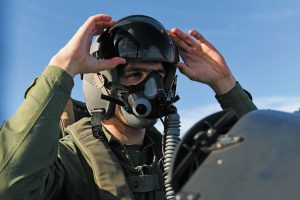 The flight instructors are extremely pleased with the cadets whom they are currently training. “The boys are serious and hard-working. They have many obligations, but they are committed to their training and they adjust well,” says Major Nino Perović, the Head Instructor of the 24th generation of student pilots on the Pilatus PC-9M aircraft, when commending his students. The cadets are also full of praise for their instructors. “We work with wonderful people. They possess a lot of knowledge and patience. Their methodical approach to the training is perfect,” Second Lieutenant Škrtić says.

Bright future lies ahead of the Croatian Air Force and these cadets. A graduate study programme of Aeronautics will be launched in September 2019. This study programme will offer the future generations of cadets a possibility to acquire more knowledge and prosper more in their careers. The protagonists of this story are very ambitious. The future helicopter pilots would like to join the Combat Helicopter Squadron or remain in Zemunik as flight instructors, while the future aeroplane pilots would like to become a part of the Fighter Aircraft Squadron, fly on the Canadair CL-215 aircraft or fly stunts with the Wings of Storm. Whatever unit they are ultimately allocated to, one thing is certain: they will all end up in the skies. They cannot imagine working anywhere else.