Back to homepage »
Share:
For the cadets of the Franjo Tuđman Croatian Defence Academy, this year’s summer camps slightly differed from previous ones. While cadets at Summer Camp 2 worked with the Marko Babić Leadership Development Centre’s future instructors at Josip Jović Barracks in Udbina, cadets at Summer Camp 1 and Summer Camp 3 were trained by experienced instructors of the 3rd Mechanized Battalion Pauci (Spiders) at Gakovo Training Area 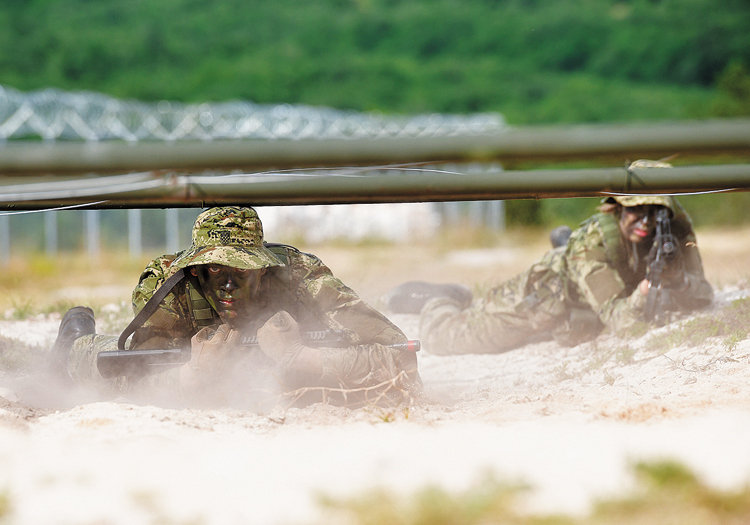 During Summer Camp 2 at Josip Jović Barracks in the central Croatian town of Udbina (July 7-21), the 15th class of cadets at the Franjo Tuđman Croatian Defence Academy, sophomore-year students of Military Engineering and Military Leadership and Management, experienced what sort of challenges the first trainees at the Marko Babić Leadership Development Centre will have to master and what the Croatian Army’s most experienced NCOs will demand of them once the centre opens its doors in September. 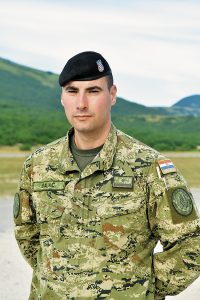 A total of 89 cadets were trained in leading a platoon, a squad and an infantry team. The training included the following programme areas: firing with infantry weapons; individual assignments; antipersonnel land mines and tank mines; minefield breaching; tactics; squad in offense and defence; team breaching with weapons; daytime and night-time marches; and leadership.

“Last year, we trained individual operation and team operations, while platoon operations and squad operations are on schedule this year. Cadets are given the roles of squad and platoon leaders and must make decisions as though they were NCOs. The camp is taking place concurrently with the training of the Marko Babić Leadership Development Centre’s future instructors and cadets play the part of the training group. Experienced instructors can help cadets upgrade their knowledge and carry out their tasks,” explained Second Lieutenant Dino Bajac, Platoon Leader in the 3rd Cadet Company, during our visit to the cadets at Josip Jović Barracks in Udbina. He added that the presence of the most experienced NCOs and combat leader’s prospective instructors increased the cadets’ motivation.

Since this year’s Summer Camp 2 was conducted by the Marko Babić Leadership Development Centre’s future instructors, we asked Command Sergeant Major Krešimir Maslać, senior instructor in the Cadet Battalion, how the cadets were managing.

“This is not a regular summer camp for the cadets, but we stick to all the topics that should be dealt with at Summer Camp 2. A novelty is a helicopter ride, which was added to the programme for the sake of the instructors, who will assume their new posts in September. The discipline is somewhat stricter at this year’s Summer Camp 2, but we bear in mind that cadets are being instructed here, not the trainees at the Leadership Development Centre,” replied Command Sergeant Major Maslać, head instructor at the training of the Marko Babić Leadership Development Centre’s instructors. 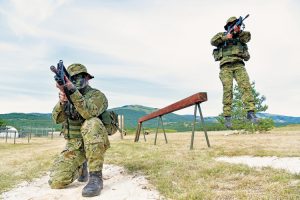 The Centre’s future instructors were pleased with the cadets’ skills and motivation, saying that working with the cadets served as a refresher course for them.

“The cadets here are a part of a pilot project. Although they are young and have not gone through proper training yet, they are doing a good job. We have to keep in mind that they are cadets and not experienced soldiers, unlike the centre’s future trainees,” pointed out First Sergeant Davor Horvat, a future instructor at the Marko Babić Leadership Development Centre.

The cadets themselves agreed that the training was more intense than usual, but they did not seem to mind. Quite the contrary, they were pleased with the camp and readily carried out all tasks assigned to them. Cadet Josip Lukinac, a second-year student of Military Engineering, confirmed that, underlining that it was a pleasure to be on the field and put into practice everything the cadets had learnt during the academic year.

“Although the camp is more intense, it has left a positive impression on me. It feels good to exhaust yourself physically and mentally as well as feel fatigued and stressed because we are preparing for real-life situations here. The instructors are very knowledgeable, you can tell that they are committed to their work and that they find it challenging to work with us. They help us when we make a mistake. They readily answer all of our questions and show us the right way to do things. They make us think logically and find a solution to a problem on our own,” said Cadet Lukinac, with whom we spoke after a practice in tactical movement, movement through forest as well as securing and extracting casualties. 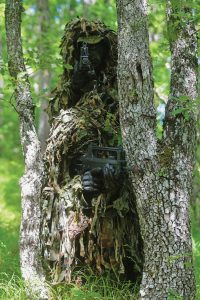 Cadet Simona Ilova from North Macedonia agreed, saying that the organization of this year’s Summer Camp 2 was at a very high level.

“We can learn a lot from the instructors and thus work our way up. We have to work harder than at last year’s camp, but that comes as no surprise since we are sophomores and must carry out increasingly more demanding tasks so as to evolve into leaders one day,” says Cadet Ilova, who will return to North Macedonia once she graduates from the Franjo Tuđman Croatian Defecne Academy and continue her career in her country’s armed forces.

CROMIL’s team also paid a visit to Gakovo Training Area, where Summer Camp 1 and Summer Camp 3 were taking place. During the second week of their stay there, the cadets were visited by the Head of the Operations Directorate at the General Staff of the Croatian Armed Forces Brigadier General Senad Fejzić, the Commandant of the Croatian Defence Academy Major General Mate Pađen, the Head of the Petar Zrinski Military Schools Centre Colonel Damir Stručić and the Commander of the Predrag Matanović Cadet Battalion Captain Hrvoje Šimleša with his associates. After carrying out tasks on work posts, cadets shared their impressions of the summer camps and underscored that it was only on out on the field that they felt like true soldiers.

While cadets at Summer Camp 2 worked with the Marko Babić Leadership Development Centre’s future instructors at Josip Jović Barracks in Udbina, Summer Camp 1 and Summer Camp 3 also featured a novelty: so as to become familiar with the work in the Croatian Armed Forces’ units, the cadets were trained by experienced instructors of the 3rd Mechanized Battalion Pauci (Spiders), Guards Mechanized Brigade.

“We reached out to the Commander of the Croatian Army Major General Siniša Jurković and he permitted the Spiders’ most experienced instructors to pass their rich knowledge from the Homeland War and international missions onto the cadets at the camps. The cadets received first-hand information on what awaited them not only in their prospective units but also in missions. The instructors also conveyed information that the cadets will need for carrying out their main task – defending the homeland. On the other hand, the instructors found out information important to them: that tradition was being continued and that much effort was being invested into developing cadets into officers. The instructors saw that we are on the right path and made some suggestions that we shall apply to other camps, as well,” said Colonel Stručić, adding that the entire military was being brought into harmony that way.

“Today’s cadets will become officers and command over these instructors one day. Leaders are being created here. If anybody knows anything about their forthcoming career path, it is the instructors, who have gone down that road already. Their impression is that we need not have any fear for our future,” Colonel Stručić concluded. 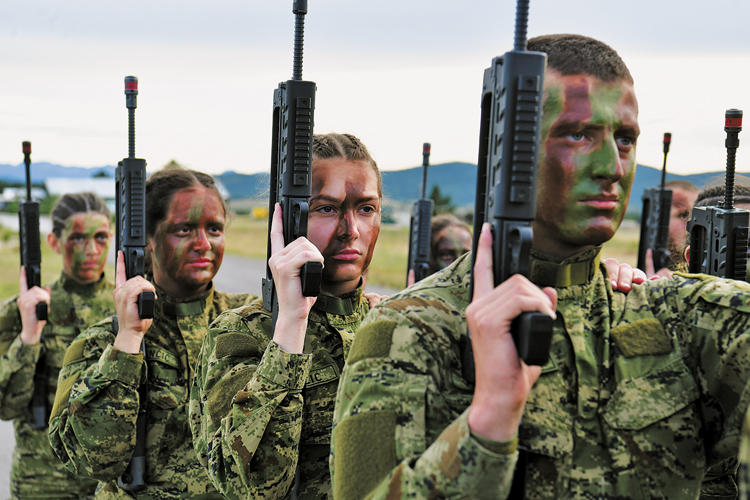 The instructors of the 3rd Mechanized Battalion Pauci (Spiders) confirmed those words, highlighting that they were positively surprised by the cadets’ high level of motivation and willingness to learn.

“Our primary task is to familiarize junior-year cadets with the work in guards units, where they will be assigned to once their academic part of their training is over. The idea that members of guards units should take part in summer camps is an excellent one. Acquainting future officers with the work in units should become a tradition. Many cadets are afraid of what awaits them at their posts, so this serves as a good preparation. They will master tactical operations implemented in guards units. Before our arrival here, we did not expect much of the cadets, but they have changed our minds for sure,” said Sergeant First Class Ive Butković.

We also spoke with Sergeant First Class Robert Zurak, a JTAC (Joint Terminal Attack Controller) instructor with a mission. Sergeant First Class Zurak did not just teach infantry platoons’ tactics, techniques and procedures in defence and attack operations as well as tactics, techniques and procedures of close air support in the third dimension of warfare (airspace); he also had to evaluate whether there were any potential forward air controllers among the trainees at Summer Camp 3.

“In the past two weeks, I have set my sight on three cadets who could become air controllers. I am looking for officers who could become good forward air controllers with further training and who could secure the survival of close air support programme as well as its integration into the Croatian Armed Forces’ units. I am pleased with the cadets. My mission here is done. We have not worked with cadets before and I shall be proud if I am a command senior enlisted leader to one of them someday,” said Sergeant First Class Zurak. 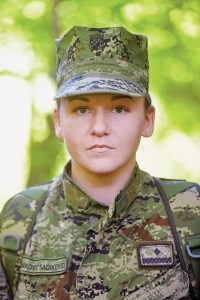 “While we planned and conducted the cadets’ training in the first two years of their study, cadets took over the reins in the third year. We conduct activities that await them in their future units, from receiving an operational command to planning and executing commands. These junior-year cadets have exceeded our expectations. All tasks have been well thought out and I am especially glad to see cadets helping and correcting one another. We should collaborate with instructors from guards brigades in the future because they know what challenges cadets will face in their prospective units.” 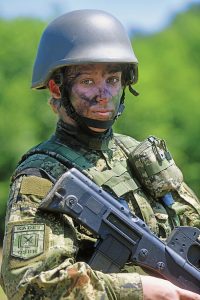 “Summer Camp 3 is the climax of our training. For the first time, we are in a situation in which we have to carry out an operation that we have planned ourselves. We receive guidelines on what to do, but everything else is up to us. Instructors are there just to supervise us. At most, they will make a suggestion or help, if necessary. For the first time, the members of units beyond the Croatian Defence Academy are taking part in the camp. The presence of instructors from guards brigades is a good thing because it helps us see how much we have learnt and whether we are ready to lead a unit a year from now. The instructors are pleased with us. The training is more intense and mentally more tiresome because we plan it ourselves.” 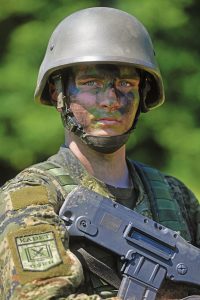 “The summer camp is a revision of the contents learnt at the winter camp – first aid, reaction to direct and indirect fire, reaction to an artillery attack, handling infantry weapons, movement, etc. Today, we dug trenches for the protection of an individual against bullets and the enemy, which was not too challenging.