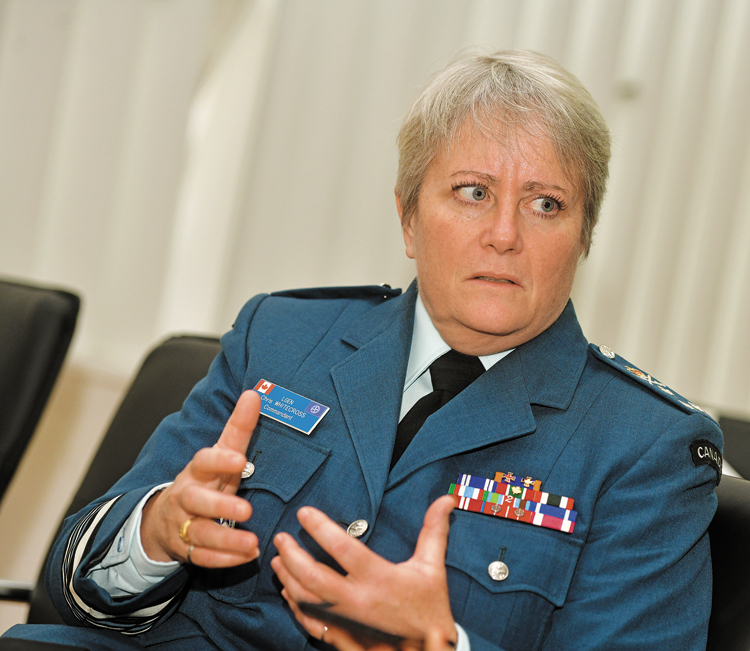 Can You tell us about the mission and the vision for the NATO Defense College?

NATO Defense College was established in  1951, shortly after the founding  of the Alliance by the 12  members.  The idea to open NATO Defense College came from General Dwight D. Eisenhower, the first Commander of the US Forces in Europe, who perceived a need to establish an international institution assigned with a unique mission of educating military and civilian leaders. The College’s mission is to  contribute to the Alliance’s efficiency and cohesion by developing its role as the main hub  of education, achievements and security studies.

Our teaching methodology is aimed to assist the graduates to develop interoperability  necessary for efficient performance in international environments.

How is the College plan and programme adapted to new challenges?

Our program has been continously updated and tailored to the challenges of the future. The Alliance has seen important changes, there was the Cold War, a number of international missions have been  launched, the Strategic Concept developed in 2010, and most importantly, from 12 founding member nations we are now 29.  Also, we co-operate and have included into dialogue nearly 40 partner countries. The NDC has changed too, but its mission has remained the same – educate the military personnel  to enhance their knowledge and understanding for the people they work with.  The underlying idea from 1951 is still alive today. Only the way we do it has changed.

The Senior Course has remained the same since the very start, and has served as base for other courses.  We have included more and more students and countries, and invite the partner countries too to discuss the topics of common interest.

We have established a Research Department, focussed on the topics of importance for NATO and its member nations. The focus has been on climate changes, new technologies, space, AI; migrations, and we integrate these topics into the existing curriculum.

How do You value the co-operation  with the Croatian Defence Academy?

Through the Senior Course  we conduct visits to NATO member nations, and it has brought us to Croatia for several times already. Our intent is to come as often as possible, to familiarise with the members’ defence and security challenges and the way they affect NATO and the way NATO impacts their decisions. NATO Defense College has excellent co-operation with the Croatian Defence Academy and we attended a few of conferences held here. On each visit we learn something, both about the challenges faced and about the innovative ideas promoted by the Croatian Armed Forces.

How would you describe the position of women in the military today?

There are still many armies with small percentage of women. Whatever the reason, it is a wrong mindset for me.  Women in the military bring a perspective that get from men. It is not necessarily a better one, just different. My point  is that women are really good at what they do. If you exclude women, you have excluded 50% of the population, and remained short of innovative solutions, opinions, diversity. Women can offer new solutions for old problems, provide a new picture of a given situation, so accept women in the military. After  38 years of service I can see the position of women is changing, but it can and definitely has to be even better.

You visited Croatia during the Homeland War? What is it like to come back after all this time?

My first visit to the Croatian Defence Academy “Dr. Franjo Tuđman” in 2017 took place after 20 years from my visit to Croatia, and it was an extraordinary moment for me. My memories of wartime Croatia were gloomy and negative. It was a time of hatred and animosity.  Coming back to Zagreb 25 years later and to see a vivid city with determined people who believe in democracy and the rule of law, who make part of the European Union and of NATO, to see the way Zagreb has evolved since then  from my own perspective   was a most liberating experience for me.  It is an honour for me to stay here, because each time I come my faith in the people is renewed.

Do You remember the Wall of Pain – the monument  to the fallen and missing Croatian defenders?

I certainly do, and I even have a tiny secret related to the Wall. I was working in the UNPROFOR headquarters behind the Wall. Every day on my way home I watched the red bricks inscribed with names. I wanted to build a part of me into the Wall, which gave me comfort and faith, and on one occasion I hid a coin into the soil beneath it. So my memories are forever tied to the Wall.