Back to homepage »
Share:
The 303rd Alka Tournament coincided with the 23rd anniversary of the Operation “Storm“ and this year's winner is Sergeant Josip Čačija, a member of the Croatian Navy.

The 303rd Alka Tournament coincided with the 23rd anniversary of the Operation “Storm“. Concurrently with the activities marking the decisive battle of the Homeland War, the Alkars were competing in Sinj. This year’s winner is Sergeant Josip Čačija, a member of the Croatian Navy.

Bara, čoja and alka – three words dominate the Cetinska krajina region in the first weekend of August for three centuries already; this year it coincided with the ceremony marking the Victory and Homeland’s Gratitude Day and Croatian Defenders Day. The honour of winning the title on the important date fell to 34-year Sergeant Josip Čačija, a member of the Croatian Navy, born in Sinj, who won eight points (punti), with two shots in the central circle of the ring.

Sgt. Čačija owes his success partly to his father, his role model and a squire to the Alkar Mladen Vučković, and he motivated him to train for Alka. Alkar Vučković taught Sgt Čačija horse-riding, when he was six and he continued practicing for long years. In 2010 in his very first appearance in the tournament he won the čoja. In 2006 he joined the Croatian Armed Forces, and having completed the Navy Special Forces Course in the Navy Special Forces Company he was assigned to the Special Forces Command in Delnice and later to his present duty (diver) in the Coastal Surveillance Battalion. In 2016 Sgt.Čačija was a part of the Croatian AVPD team engaged in ATALANTA (EU NAVFOR SOMALIA – OPERATION ATALANTA.

For his contribution to realisation of the unit’s tasks Sgt Čačija was nominated NCO of the Month in January 2017. His superiors have repeatedly  commended his performance and qualities.

In addition to being honest, hard-working and good team player Sgt Čačija leads an active life, taking part in the Croatian Armed Forces’ orienteering, shooting and swimming Balancing the regular duty and preparations for the Alka tournament required a lot of discipline, as the preparations for Alka are a year-long cycle, kicking off in January, intensified in May with two to three trainings a week and with daily rehearsals throughout July. It was possible thanks to the support from his colleagues, superiors and other close persons. 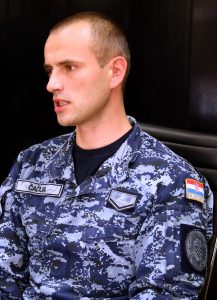 He was rewarded with the triumph on 5 August. In three races riding his horse Aškan Sgt Čačija hit the centre of the ring twice and won eight points. Physical fitness combined with psychological stability – calmness and collectednes- as the horses sense when the rider is nervous and can react in an unwanted way“, says the winner of the 303rd Alka

He has been awarded a Croatian flag pennant, a gold Alka plaque and a 40,000 kuna cash-award from the Alka Knights Society, while the President of Croatia presented him with the gold ring with the Croatian coat of arms and a sabre. The biggest award of all is winning Alka on the Victory and Homeland Gratitude Day and on the Anniversary of the Operation “Storm“. “I am a member of the Croatian Armed Forces and my father was a participant of the Operation “Storm“. My victory overwhelmed us both with pride and patriotism“. Even after the achievements, Sgt Čačija is keen to continue working hard to reap new successes as soldier  and to master diving skills and pass them on the future generations and as Alkar too and win the last of the three trophies he has not won so far – the bara.  The love for his duty and his passions, which is evident from his statements, will help him on that way.