Back to homepage »
Share:
Tigrovi“'s war history is a history of courage and honour of the Croatian soldiers,  who won hardest battles under the leadership of their wartime commanders“, said the Chief of the General Staff Admiral Robert Hranj 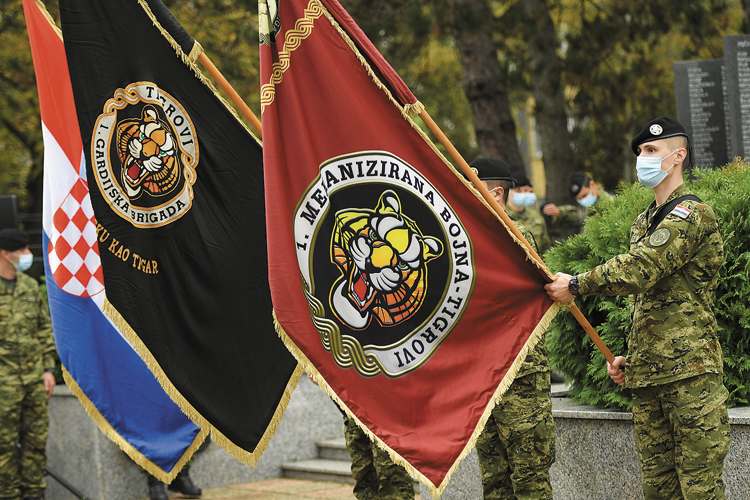 Alongside the members of the 1st Guards Brigade and of the Battalion „“Tigrovi“, and the families of the fallen, missing and deceased members of the Brigade the ceremony was attended by the President of the Republic Zoran Milanović as Supreme Commander of the Croatian Armed Forces , by the Envoy of the Speaker of the Croatian Parliament Ante Deur, by the Deputy Prime Minister and Minister  of Homeland War Veterans Tomo Medved as  Envoy of the Prime Minister, by Defence Minister Mario Banožić, by the Chief of the General Staff of the Croatian Armed Forces Admiral Robert Hranj and by the Chairman of the Association of War Veterans of the 1st Guards Brigade Ilija Vučemilović Šimunović.

The Defence Minister Mario Banožić  commemorated the fallen and missing Tigers, emphasising that with special reverence and respect he expresses deep gratitude to all Tigers and their families for everything they have done for Croatia. “Today’s ceremony marking the establishment of the 1st Guards Brigade and the marking of the Battalion “Tigrovi“ Day is a reminder of the hardships, but also of the glorious and proud history of the Croatian Army and the Croatian people. Croatian defenders and the Homeland War are the foundation of today’s modern and democratic Croatia. We are looking to the future, but we must be aware of our history, “stated the Minister, who also said that it was a special day for the new members of “Tigrovi“, who were solemnly presented with the characteristic black berets with the Battalion badge:” Proudly wear your black berets, just as your predecessors did!“.

Congratulating  on the 30th anniversary of the founding of the legendary 1st Guards Brigade “Tigrovi”  Minister Tomo Medved reminded that over 11,000 defenders had proudly worn the “Tigrovi“ insignia, 367 sacrified their lives for the homeland, while six are still missing.

“On the 30th anniversary we are express deep gratitude to their families to whom we feel close.

Minister Medved also stated that 30 years earlier the Croatian people had realised that united in a common goal and desire we stood all hardships. “We proved it during the Homeland War, and we must remain united today in building a more prosperous future. May the unity be a stronghold and a source of strength in our daily work, “said Minister Medved, and congratulated the young members of the Tigrovi Battalion as guarantors of Croatia’s safety today”.

The Chief of the General Staff  Admiral Robert Hranj also congratulated  30th anniversary  and underlined the Brigade’s huge contribution in the Homeland War and feats at battlefields will remain in history. 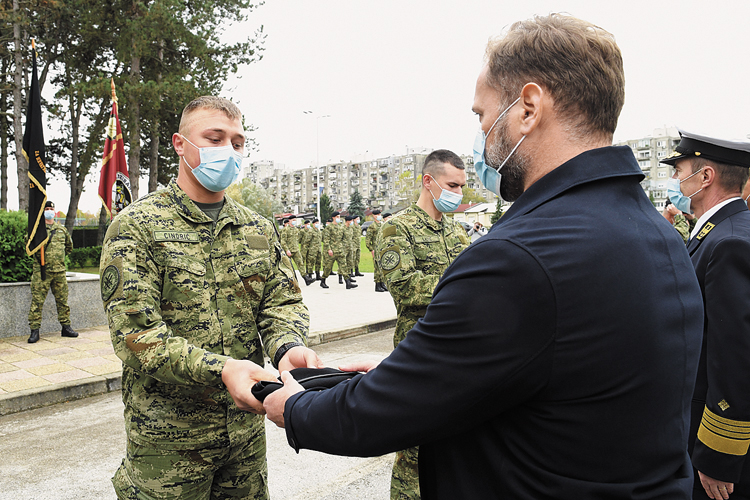 “Tigrovi“’s war history is a history of courage and honour of the Croatian soldiers,  who won hardest battles under the leadership of their wartime commanders“, said the Chief of the General Staff Admiral Robert Hranj, and shared his gladness that the young successors of the 1st Mechanised Battalion of the Guards Mechanised Brigade  inherited the tradition and continue the glorious path of the 1st  Guards Brigade.

The Chairman of the Association of War Veterans of the 1st Guards Brigade “Tigrovi“ Ilija Vučemilović Šimunović stressed the importance of the ceremony for the “Tigrovi“, one of the first units of the Croatian Army and the unit with the first victim of the Homeland War – Josip Jović. “Each of 11,000 of us in the legendary Brigade has his own story to tell. The privilege of us surviving members of the Brigade is that we are honoured to have fought and lived  with those who lived and died for Croatia. “For Croatia like a tiger“, said the Chairman reminding of the  367 fallen members of the 1st Guards Brigade.

The commander of the “Tigrovi“ Battalion of the Guards Mechanised Brigade Lieutenant Colonel Krešimir Kršinić said that all members of the Battalion received their berets after completing a  demanding training. “They are young people who joined the Croatian Armed Forces for patriotism and zeal. It is a pleasure to work with them and make them professionals. The members of the Battalion “Tigrovi“ took part in various missions and operations in 2020 too, providing assistance to people whenever necessary.

The 20-year Sara Lukes of the 1st shared her pride over receiving the beret on the historic 30th anniversary of the 1st Guards Brigade “Tigrovi“. “I am motivated by my love for the job, and just hearing what these people were through gives you a huge motive to guard their sacrifice and courage. I will do my best to do my part too“.