Back to homepage »
Share:
The EU Battlegroup 2020-2, consisting of a Croatian Contingent, is placed on a six-month stand-by period as of 1 July 2020 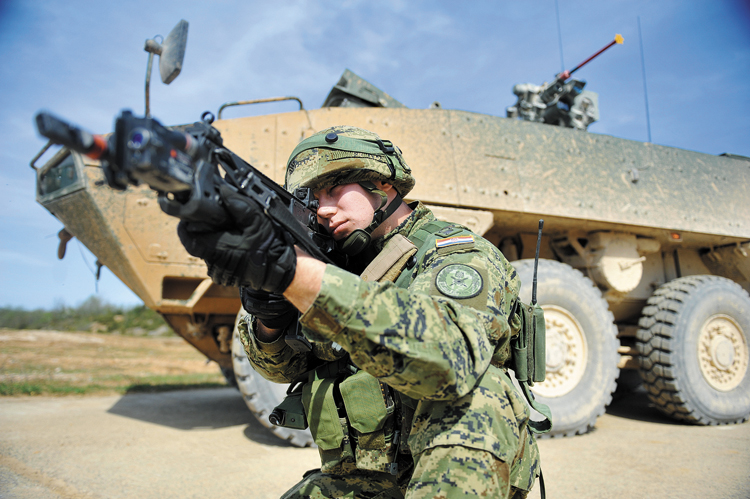 The EU Battlegroup EUBG 2020-2 consisting of a Croatian contingent and with the Federal Republic of Germany as the framework nation, s placed on a six-month stand-by period as of 1 July 2020. Alongside Germany and Croatia as force providers, the Battlegroup is also comprised of forces from Austria, the Czech Republic, the Netherlands, Ireland, Finland, Latvia and Sweden. The Croatian forces of the Battlegroup 2020 are composed of a total of 205 members of the Croatian Armed Forces, mainly the members of the motorised infantry company of the Battalion “Vukovi” of the Guards Mechanised Brigade and the engineer platoon, a logistic squad, a Military Police team and staff officers assigned to the Battlegroup Command.

EU battlegroups (EUBG) are a capability of the European Union ready for rapid reaction, with two battlegroups alternating on standby every six months. During the stand-by period the national contingents perform their regular tasks within the national borders, and in the event of decision on the engagement each participating member state undertakes the respective national procedures for deployment in the area of operation. The preparation process for the stand-by comprises months of preparations, including periodic expert meetings and exercises to ensure preparation and establishment of frameworks and models of joint operation of the member states. As each preparatory meeting is organised individually by the member states, one of the multinational coordination meetings of the Battlegroup 2020-2 was held in Zagreb in late November 2018.

The European Union established the battlegroups as crisis rapid response mechanism, directly contributing to the enhancement of the Union’s crisis response and management and humanitarian operations capacities and capabilities. The activities focussed on crisis prevention and mitigation contributes to the collective security and calls for engagement of all member states proportionately with their capabilities. The engagement in the EU battlegroups directly enhances the interoperability between the member states and to the development of bilateral partnerships.The Republic of Croatia has participated in five EU battlegroups to date – in the Sweden-led EU Battlegroup in the first half of 2011, in Germany-led Battlegroup in 2012 and 2016, in the Italy-led Battlegroup in 2017 and in the Poland-led Battlegroup in the latter half of 2019 respectively.