Back to homepage »
Share:
It will be a demanding and exhausting activity , but you are prepared for the efforts ahead of you.  We are dedicating this march to the fallen and deceased Croatian defenders, in honour of the  magnificent Operation “Storm“ 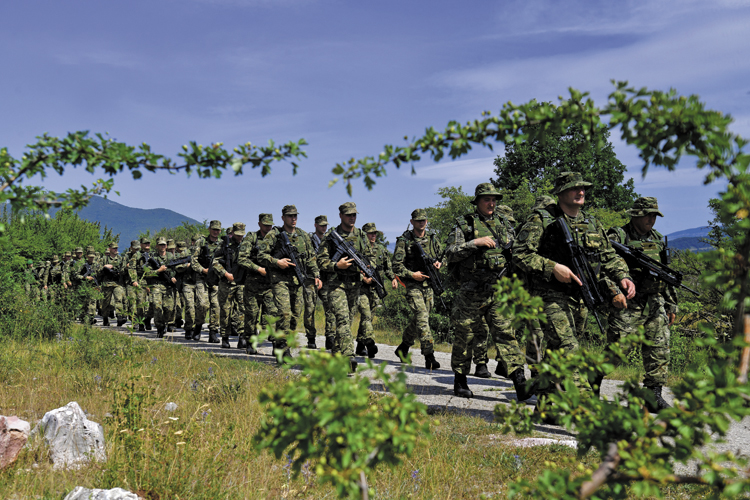 Commotion on the stage of the Barracks “Josip Jović” at Udbina, as early as at 2.30 in the morning, the Udbina field still shrouded in darkness and silence, broken only by the clinking of weapons, battle backpacks, military boots marking the last preparations before a 87-km road march to Knin, undertaken by the second consecutive generation of trainees of the test course by  the Primary Leaders Training Centre  “Marko Babić”, as the last test of their endurance on the eve of the marking of the greatest military victory in the Homeland War. On the arrival to the Knin Fortress they will be presented with  badges and diplomas. Hence the excitement, motivation and impatient awaiting of the order to move…

The road march is one of the most demanding training activities of the Croatian Armed Forces, aimed at developing  and strengthening the capabilities of NCOs and officers. It comprised three phases – the adaptation or basic military skills refreshment, more advanced tactics, techniques and procedures in the second phase and the combination of the acquired skills in the third phase, and the tactics is applied with the participants at the platoon level.  The new training course received officers and members of units other than manoeuvre  (the Croatian Navy, the Military Police Regiment, the Engineer Regiment, the International Military Operations Training Centre, among others). The training was preceded by selection, passed by 80 candidates out of 110 registered, and 60 candidates were admitted to the training. At the end of the 6-week training 43 were ready to take the road march to Knin as the last endurance test.

On the stage in front of the mural depicting the legendary defender of Vukovar Marko Babić and the symbolic motto  “Sweat spares blood“, motivating them throughout the training. A loud cry “Salute to the homeland“ echoed in the dark.  The Commander of the Centre Colonel Tomislav Kasumović issues the last instructions before the start: “Do not move out of the column. We are to start and finish this march together“. He raises his voice to ask: “Are we ready for the task?“ the column  replies in unison “Ready!”

None of the participants doubts in enduring the last challenge. Lieutenant Tomislav Sokolić, a member of the “Gromovi“ Battalion confirms it: “We are very excited. Motivation is sky-high; the training was rigorous, but are nearing the end. We only still have to complete the march to Knin“. And off they went. “I will, I can, I must!” – they repeated day after day, proving their ability to themselves and to their instructors and commanders.

They are now facing the final challenge – the 87-km march to Knin, a symbol of victory in the Homeland War. It is also the last test of their psychological and physical readiness and endurance. They are joined by  ten members of the Basic Leader Training Centre – their instructors, some of whom are trainees of the former NCO training centre at Šepurine, which is the core and the predecessor of the present-day Basic Leaders Training Centre.

Following the start at 3:00, the column stopped briefly at the Church of the Croatian Martyrs at Udbina, for blessing and prayer. They put on consecrated rosaries – a symbol of faith and strength of  Croatian defenders in the Homeland War – on their uniforms, and left reinvigorated by the words: “Nothing can divide us from the love for our homeland”, and recited the words carved into the crypt in the foundation of the sanctuary at Udbina, with a roll of honour of the fallen Croatian defenders to whom they dedicate the march.

They have to cross nine 10-km sections, and take  rest after marching for 55 km. On the first day they crossed five sections from Udbina to Otrić, followed by four more to Knin. The journalist and photo team of the “Hrvatski vojnik“ magazine follows them closely.  The soldiers sing on every step they take. “We are a generation of heroes, a strong victorious army; if there is war again, I shall fight for my home“. At the end of the first part of the route, near Gračac, is a short break after 35 km of march, we ask them how they feel. The sole female trainee, 2nd Lieutenant Irena Lovrić of the International Military Operations Training Centre “Josip Briški“, told us:  “Motivation is high, also for the awareness of the efforts I am taking today and tomorrow . The road march may be demanding but without affecting motivation. During the six weeks we upgraded our endurance to a very high level. Just knowing what is ahead of me I can cope easily and so far there have been no problems. The training was a bit harder for me as a woman of slightly fragile constitution, but the fellow trainees have been very helpful and ready to help.  The team spirit was there throughout the training so I didn’t notice any gender-based differences. I was accepted by everyone“.

Corporal Marko Korica of the 1st Mechanised Battalion “Tigrovi“ says the marching is not too hard given the solid preparation since the beginning of the Course. “We may feel a few cramps, and burning feet, and the weather is hot, but we are prepared for any season, be it heat, cold, or rain.  I think all of us marching have a closer family member or a relative who was a participant in the Homeland War, which is in itself a strong motivation for us, especially that the destination is in Knin and in the Knin Fortress, so we dedicate this road march to the fallen defenders and our relatives who took part in the War“, said Cpl. Korica.

There are two more sections ahead of them, the ascent to Malovan and farther to Otrić, where they will spend the night in the camp and rest. The sky is threatening with rain, as forecast, which will probably follow them until the finish. They moved on again at dawn. At the distance of 10 km to Knin they take the last rest in the abbandoned barracks “Stara Straža” and prepare for the badge and diploma award ceremony. The trainees apply camouflage paint on their faces and hands, spruce up the uniforms, helping each other and joking, now at the threshold of their destination, nothing can stop them.

Entering Knin instilled strong emotions. The last effort was to climb the Knin Fortress. The road march concluding their training, the pain they felt, the efforts endured and the support given to one another reminded them of the hard path of the Croatian defenders towards victory. As for the trainees, they will continue the new stage of development and training of the Croatian Armed Forces and serve as leaders who will lead by their own example, as the Croatian wartime commanders did.

At the Fortress, which joins Croatia’s past and future, the new Croatian Armed Forces primary leaders were presented with badges and diplomas on successful completion of training by the Defence Minister Mario Banožić, by the Chief of the General Staff of the Croatian Armed Forces Admiral Robert Hranj, by the Commander of the Croatian Army Lieutenant General Boris Šerić and the Commander of the Training and Doctrine Command Brigadier General Željko Ljubas.

Congratulating them on the successful completion of the training, Minister Banožić said that the Croatian Armed Forces welcomed new superbly trained primary leaders, guaranteeing their top  readiness and capability. “Courage, determination, effort, sweat and hard work makes the difference between a good and a best army. From you I expect nothing but the best. Take Croatian defenders and heroes such as Marko Babić from Vukovar as your role model and inspiration in overcoming the challenges and tasks ahead of you. We are living in times of many challenges and uncertainties, but unity, joint work and commitment to well-being of Croatia is the path to follow with determination and strength“. Admiral Hranj said the 2nd generation of trainees of the Course proved to be worthy members of the victorious Croatian Army.

The best participant of the primary leaders course , Sergeant Jozo Projić, said the Course was hard but he was also caught in deep emotions on climbing the Knin Fortress on the 25th anniversary of the Operation “Storm“, particularly as a member of the Battalion “Pauci“, the successor of the legendary 4th Guards Brigade, which entered victoriously in Knin in the liberating Operation. The 25-m flag from the Knin Fortress they received from the Mayor of Knin on the occasion of the 25th Anniversary of the Operation “Storm“ will be guarded on a special place in the Barracks, as a lasting memory of the victorious operation of the Croatian Army in the Homeland War.