Back to homepage »
Share:
“I am certain that President Tuđman would approve of the development of the victorious Croatian Armed Forces”, stated Minister Krstičević 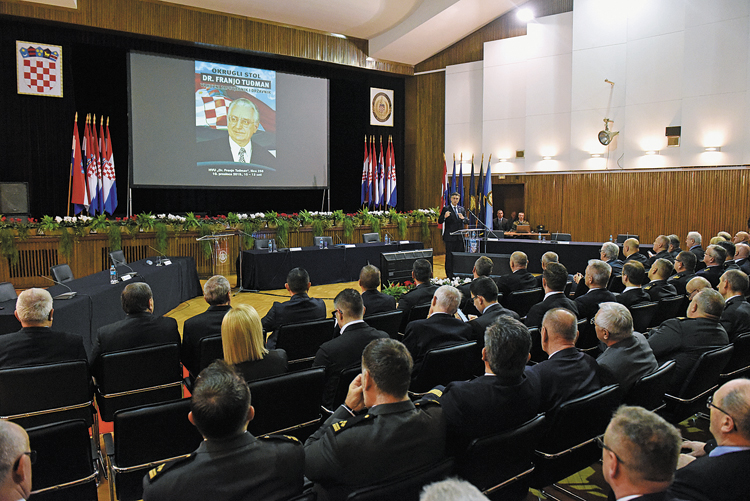 On the occasion of the 20th anniversary of the passing away of the first President of the Republic of Croatia dr Franjo Tuđman a Roundtable titled “Dr Franjo Tuđman – Supreme Commander and Statesman“ was organised in the Croatian Defence Academy (named after him) on 10 December 2019.

The Commander of the Croatian Defence Academy Major General Mate Pađen welcomed the participants  the Round Table, followed by a film on the first President of the Republic of Croatia.

Prime Minister Plenković: Franjo Tuđman bequeathed us the sense of belonging and dedication to the idea of Croatian state

The opening address was delivered by Prime Minister Andrej Plenković.

“The important fact to keep in mind, and especially by the young, is that the period from  1989 – 1999 was of strategic importance for the Croatian state and the people. It was a crucial decade for the Croatian people.  It is particularly important to note that President Tuđman bequethed to all of us the sense of belonging and dedication to the idea of the Croatian state; he was the biggest Croatian sovereign – a country ignorant of pluralism, independence and market economy eventually gained international recognition as a free country with territorial integrity, population and government“.

Prime Minister:  Statehood Day to be marked on 30 May again

“We have simbolically reversed the marking of the Statehood Day to 30 May, not because other dates are not important but primarily as 30 May 1990 opened a 2 –year process of making strategic and crucial institutional decisions were made to establish a framework and legal foundations of the Croatian state“ said the Prime Minister.

Minister Krstičević in his address emphasised that the Roundtable was held in the Croatian Defence Academy that had been named after him, and was envisaged to grow into a University of Defence and Security “Dr. Franjo Tuđman”.

“This Roundtable is dedicated to President Tuđman, who bore the greatest merit, alongside the Croatian defenders,for the freedom and independence of Croatia and for the establishment of the Croatian military, which deeply respects its history and builds its future upon the values of the Homeland War.

The Minister said President Tuđman was undoubtedly one of the biggest figures of the Croatian and world history, led by a vision for the future of Croatia. His vision came true at the historic line-up of the Croatian National Guard in the FC Zagreb Stadium in Zagreb on 28 May 1991, and later in the Knin Fortress on 5 August 1995, when he stated:  “The Croatian flag hoisted here concludes the struggle for free and independent Croatian state“. Also, President Tuđman’s approach and leadership ensured an irreproachable military operation“. 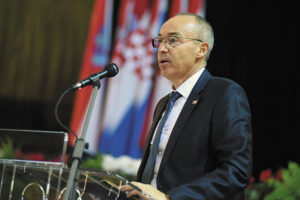 Minister Krstičević: We are building  a strong military based on the Homeland War and on the merits of the first Croatian president

The Minister stated: “Dr. Franjo Tuđman was a great statesman, a patriot, and in my view a great strategist too; judging by the decision that  the Croatian Army take positions in Dinara Mountain in November 1994, which greatly facilitated the execution of the Operation “Storm“ as the final campaign and to liberate Croatia. The Croatian Armed Forces respect their history, the first Croatian President and leader.  We are building a strong military for the future, upon the Homeland War, on our history and the merits of the first Croatian President and Supreme Commander”.

Among the speakers of the Roundtable were Prof. Ivica Kostović, Prof. Miroslav Tuđman (speaking on “Dr. Franjo Tuđman – Security and Defence Systems of the Republic of Croatia“), Vesna Škare Ožbolt (a close associate of President Tuđman and a former Minister of Justice), who delivered a lecture on President Tuđman and the peaceful reintegration of the Danube Basin; the Chief of the General Staff of the Croatian Armed Forces presented President Tuđman as supreme commander, and the former Commander of the 1st Guards Brigade “Tigrovi“ Lieutenant General Marijan Mareković recounted the final liberating operations.

Minister Krstičević concluded the Roundtable by extending appreciation to all participants and in particular to the Croatian Defence Academy for the initiative and organisation of the Roundtable.

“It is highly important to guard the memory of the key figures of the Homeland War and of the struggle for independent Croatia that President  Franjo Tuđman was. The Croatian Armed Forces are among the main guards of the Croatian identity, tradition and all the values underpinning the independence and sovereignty of the Republic of Croatia. I am certain that President Tuđman would approve of the development of the victorious Croatian Armed Forces”, concluded the Minister.