Back to homepage »
Share:
Around 820 pilgrims from Croatia participated in the 61st International Military Pilgrimage to Lourdes, France. They were joined by pilgrims from over 40 countries around the world 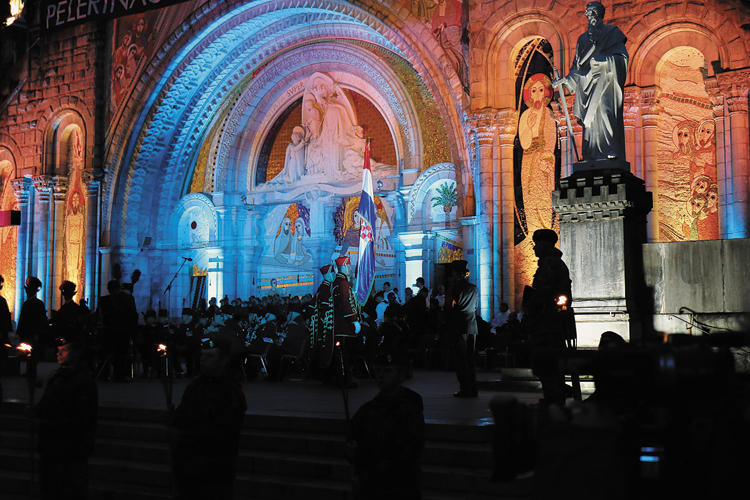 This year, the 27th Pilgrimage of the Croatian Armed Forces, Police and Homeland War Veterans to Lourdes, France was held under the motto: “Seek peace and pursue it.” Around 820 pilgrims from Croatia set out for the renowned Marian sanctuary, where they were joined by pilgrims from over 40 countries around the world.

It was particularly impressive to see Croatian pilgrims arrive at the sanctuary in a solemn formation on the first day of their stay, greeted by the local population and soldiers from around the world. The International Military Pilgrimage is a meeting point for nations and armies, a place where they can build mutual trust, which adds a special dimension to the experience. As the motto of the pilgrimage says, peace was sought and pursued in every prayer and during every meeting, while Croatian pilgrims, under the guidance of Minister Krstičević and the Military Ordinary of Croatia Jure Bogdan, demonstrated the importance of faith in the lives of Croatian soldiers and policemen.

In his sermon to pilgrims from Croatia and Bosnia-Herzegovina in front of the Cave of Apparitions, Bishop Bogdan underlined the importance of Lourdes for people of faith, for Croats. He painted a colourful picture of Lourdes as God’s favoured place where heaven and earth met. He also mentioned three elements connected with Lourdes: rock, fire and water. Furthermore, he emphasized that the message of peace from Lourdes extended to armed forces across the world, including the Croatian Armed Forces and the Croatian police, which was their motivation for going on the pilgrimage. He reminded the Croatian pilgrims to follow the motto of this year’s pilgrimage: to seek peace and pursue it. “Peace ought to be sought within us, within our families, within Jesus and within His Mother. That is the peace we seek and pursue,” Bishop Bogdan underlined in his inspired sermon.

The mass was co-celebrated by the Military Ordinary of Bosnia and Herzegovina Tomo Vukšić as well as military and police chaplains.

Croatian soldiers, Homeland War veterans and policemen took part in the Way of the Cross, demonstrating the importance of spiritual dimension in their lives, along with the physical and mental one.

In the vicinity of the Cave of Apparition, Minister Krstičević and General Mikić lit a votive candle for all fallen defenders in the Homeland War (1991-1995). 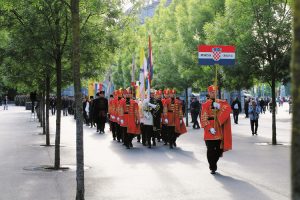 On 17th May, the day before the opening of the 61st International Military Pilgrimage (Pèlerinage Militaire International, PMI), Bishop Bogdan recalled Pope Francis I’s words from his apostolic exhortation at the Basilica of Our Lady of the Rosary: “At its core, holiness is experiencing, in union with Christ, the mysteries of his life. It consists in uniting ourselves to the Lord’s death and resurrection in a unique and personal way, constantly dying and rising anew with him.” Bishop Bogdan underlined that everyone was invited to be holy, to let God enter their lives, imbue them and shape them. He roused the congregation to dare to live a holy life and emphasized: “Living with God pays off. It pays off to walk with Jesus, who is the Way, the Truth and the Life. A holy living pays off. It is a way of complete happiness, complete purpose, complete fulfilment already here on earth. But, it is also the way to heaven, to happy eternity, to Father’s home.”

The 61st International Military Pilgrimage was continued at the Basilica of Saint Pius X in Lourdes, where a votive candle was lit following a solemn procession of orchestras, flags and delegations. Minister Krstičević attended the opening, along with the ministers of defence from Bosnia and Herzegovina, Hungary and Italy as well as numerous high-level delegations from participating countries.

More than 14,000 soldiers and policemen from all over the world participated in the pilgrimage.

The opening was followed by the Vigil of Reconciliation and Confession at the Basilica of Saint Pius X, which had been organized by the Republic of Croatia. Adoration was jointly conducted by Bishops Bogdan and Vukšić. In his sermon, Bishop Bogdan roused the pilgrims to promote peace in their everyday lives, but not just any peace: the true, authentic peace of God.

At a joint mass for pilgrims from Croatia and Bosnia and Herzegovina at the Church of Saint Bernadette, Bishop Vukšić underlined the danger of resigning to matters that are irreconcilable with our convictions in his sermon. He called on the people of faith to be the ecologists of conscience and the promoters of the good in contemporary times, which have a lot of common ground with Biblical times.

In the early morning hours of 18th May, Minister Krstičević and his associates visited the tent camp housing Croatian soldiers and policemen at this year’s pilgrimage. He was also greeted by disabled former Croatian soldiers, who regularly go on a pilgrimage to Lourdes.

Alongside Minister Krstičević, the camp was also visited by Military Ordinaries Jure Bogdan and Tomo Vukšić.

Speaking to Croatian pilgrims at the camp, Minister Krstičević thanked them on their daily efforts to represent the Republic of Croatia with dignity: “Aside from the mental and physical dimension, the spiritual dimension is also important for a prepared and capable Croatian soldier. By coming to this sanctuary, you bear witness to that.”

Addressing the disabled former soldiers, Minister Krstičević expressed his deep gratitude to them, emphasizing that they were an imperishable asset for Croatia.

In the continuation of the visit, the Croatian Armed Forces’ Orchestra and the Croatian Navy Vocal Ensemble “Sveti Juraj” (Saint George) held a concert at the camp.

At the closing of the 61st International Military Pilgrimage in the Marian sanctuary of Lourdes, the Military Ordinary of France Antoine de Romanet put out a candle, the symbol of the pilgrimage in which the Croatian Armed Forces, the Croatian police and Homeland War veterans took part for the 27th time. Bishop de Romanet invited soldiers to gather again in Lourdes next year so as to build peace.

The night before, an infinite flow of soldiers had walked with candles in their hands from the Cave of Apparition to the sanctuary in Lourdes behind a statue of Our Lady of Lourdes and a cross carried by the Zrinski Guard and surrounded with candles, the light of which is one of the elements of the pilgrimage. A festive programme featuring prayers and musical performances, including one by the Croatian Navy Vocal Ensemble “Sveti Juraj”, had been held in front of the Basilica of Our Lady of Rosary.

Once more, Croatian pilgrims took the message of peace to their homes and passed it onto their families. Seeking peace has been and continues to be the moving force in the development of a world of understanding and co-operation.

Many Croatian pilgrims made a firm promise to themselves that they would return to Lourdes, which they carry in their hearts.