Back to homepage »
Share:
The 60th International Military Pilgrimage and the 26th Pilgrimage of the Croatian military and police to Lourdes was held from 15-22 May 2018, under the motto: Peace on Earth 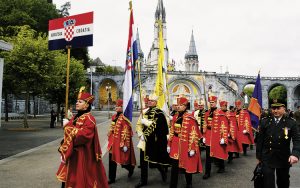 The 60th International Military Pilgrimage and the 26th Pilgrimage of the Croatian military and police to Lourdes was held from 15-22 May 2018, under the motto: Peace on Earth, inspired by the Encyclical “Pacem in terris” by Pope John XXIII in 1963. The Croatian pilgrims (who were 888) joined all others praying for the peace. The Pilgrimage was organised by the Military Ordinary in Croatia, with the support by the Ministry of Defence, the Ministry of the Interior and the Ministry of the Homeland War Veterans. The Commander was Brigadier General Siniša Jurković, the Commander of the Croatian Army. The Pilgrimage commenced with a mass celebrated in the church Krista Kralja in Zagreb, celebrated by the Military Ordinary of the Republic of Croatia, Mons. Jure Bogdan and attended by the Deputy Prime Minister and Defence Minister Damir Krstičević, the State Secretary for Defence Zdravko Jakop (the Minister’s Envoy on the Pilgrimage) and the Minister of the Homeland War Veterans Tomo Medved and representatives of other government bodies. The Croatian pilgrims attended a mass on the first day of the stay in Lourdes, in front of the Grotto of Apparitions celebrated by the Military Ordinary; the Commander of the Pilgrimage, Brigadier General Siniša Jurković placed the votive candle for all fallen and deceased members of the Croatian Army, the police and the defenders. And in the afternoon all attended the penitential service in the St. Bernadette. The Military Ordinary of Bosnia and Herzegovina, Mons. Tomo Vukšić celebrated the mass in the Basilica of Holy Rosary St. the following day; when the International Military Pilgrimage was opened with a formal march of the orchestras, including the Croatian Armed Forces Orchestra, and of 43 delegations, and also with the candle – the light of the 60th International Pilgrimage – lit by the French Military Bishop Antoine de Romanet, who bid welcome to all pilgrims. At the opening ceremony Pope Francis’s message was read out to all military and police pilgrims.

The delegations of the participating countries also paid tribute to the soldiers fallen in wars.The traditional Marian Torchlight procession took place in the evening, featuring a devotional service in front of the Basilica of Holy Rosary, with a performance by the Croatian Navy’s Vocal Ensemble ”Sv. Juraj”, The members of the Zrinski Guard of Čakovec and the Croatian policemen carried the Cross to the Basilica. The high moment of the Pilgrimage was the mass on Pentecost  Sunday  celebrated in the Basilica of St Pius X, by the French Military Bishop, assisted over 200 priests and bishops; the French Bishop also closed the Pilgrimage by  putting out the candle (the symbol of the Pilgrimage) later that day, and invited the soldiers to attend the Pilgrimage of Our Lady of Lourdes next year (17 – 19 May) too, for the peace in the world, which “isn’t a dream or a utopia; it  takes a contribution of each individual to building a world of peacemakers”, with a recourse to God for assistance. At the opening ceremony the message of the Pope Francis to all military and police pilgrims was read ”Your Christian faith and roots with God  can only help you fulfill your combat tasks for just reasons and keeping order and security and protecting the people-, which are often expected from you at the national and international level. Let the commanders reveal in Christ the light of righteous and reasonable decisions, promoting peace and serving for the benefit of all; and let the obedient soldiers in the sacrifice of their lives find serenity in Christ. Christ’s sacrifice on the cross makes it possible to accept death for the sake of other people’s lives”.