Back to homepage »
Share:
The 25th anniversary of the international recognition was formally marked with a concert held in the Ban Jelačić Square in Zagreb on 15 January 2017, under the auspices of the Government of the Republic of Croatia and the City of Zagreb, followed by a formal […]

The 25th anniversary of the international recognition was formally marked with a concert held in the Ban Jelačić Square in Zagreb on 15 January 2017, under the auspices of the Government of the Republic of Croatia and the City of Zagreb, followed by a formal ceremony and concert in the Vatroslav Lisinski Concert Hall, gathering a number of the public figures of the time, Croatian  defenders and political, cultural, religious, diplomatic dignitaries.

The President of the Republic of Croatia  Kolinda Grabar-Kitarović in her address said that a lot has been done since the international recognition of Croatia and called on all to do a lot more. T

“Our foremost task is to ensure that our young people stay and prosper, rather than leave to all corners of the world. I truly believe that Croatia has all the prerequisites to be a prosperous state in which people will not just stay, but will also return. We have a glorious history, geographical area, climatic conditions, resources and hard-working and good people”, said the President.

Senior state delegations, headed by the Prime Minister Andrej Plenković, laid the wreaths on the Altar of the Homeland at Medvedgrad, on the tomb of the first Croatian President dr. Franjo Tuđman and at the monument “Voice of the Croatian Victims – Wall of Pain“ and at the central cross in the Alley of the Fallen Croatian Defenders from the Homeland War at the Mirogoj Cemetery in Zagreb.

A thanksgiving mass  was held on the occasion in the Zagreb Cathedral, served by the Archbishop of Zagreb,  Cardinal Josip Bozanić, which was attended by the President of the Republic of Croatia  Kolinda Grabar-Kitarović, the Speaker of the Croatian Parliament Božo Petrov, the Prime Minister of the Republic of Croatia Andrej Plenković, the Deputy Prime Minister and the Defence Minister Damir Krstičević, the Minister of Veterans’ Affairs Tomo Medved, the Chief of the General Staff of the Croatian Armed Forces, General Mirko Šundov, the Military Ordinary Mons. Jure Bogdan, Mons. Juraj Jezerinac,  Military Ordinary  (Ret.) and other dignitaries.

“That historic day, the Croatian people, led by dr Franjo Tuđman,  has made its major accomplishment and received the recognitions which strengthened our hope and faith in a prosperous country, belonging to all its citizens. We are today commemorating with deep gratitude the defenders who made the hardest sacrifice for a free and sovereign Croatia. They have obliged us to struggle for this beautiful country, to entice the developmental projects and investments, open new workposts and enhance the economy of Croatia. The struggle for ever better and stronger Homeland is never over“, said Deputy Prime Minister Damir Krstičević. 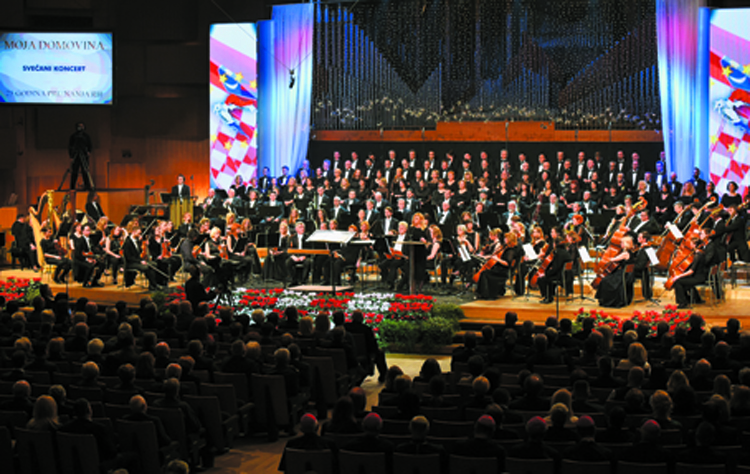 Formal session of the Croatian Parliament

On 16 January the formal session of the Croatian Parliament was held, attended by a number of dignitaries, former and present senior officials and members of the Parliament and by the President of the European Council Donald Tusk, who stated that Croatia had every right to be proud of the past 25 years:

“Twenty five years ago Europe and the United Nations recognised your independence, believing that Croatia would become a part of the political community for whom freedom, peace, respect for others, observance of international rules and order, are genuine priorities. You haven’t let us down; you have used those twenty-five years well“.

“Independence and democracy do not always have a sweet taste, I know something about this. Conflicts and differences are inherent in the logic of history and in our everyday life. That is why it is so important to continuously search for what connects us, over and over again, tirelessly. It is essential, however, that you continue in this great effort for the sake of peace and stability in the region and in the whole of Europe“.

“Croatia is a free and sovereign democracy that makes a considerable contribution to efforts to build peace and stability and to honor international rights, and our permanent duty is to promote the truth about the (1991-1995) Homeland Defence War, pay tribute to those who sacrificed themselves for the country and to all Croatians who gave their contribution to the foundations of the free and independent Croatia“, said the Croatian Prime Minister Andrej Plenković.

The Speaker of the Croatian Parliament Božo Petrov said: “We must prove ourselves worthy of thus acquired freedom and recognition, choosing the right solutions appropriate for the vision of Croatia’s future. I will strive for making our children proud of us, just as we are proud of those who created Croatia. Let us give our best to deserve our children’s appreciation, similar to the one we have for the heroes of the nineties and let us seize fully the opportunities those heroes created for us“.

Croatian President Kolinda Grabar Kitarović stressed that January 15, the day of international recognition, is one of the most important dates in Croatian history.