Back to homepage »
Share:
The finale of the Croatian portion of international military exercise Trojan Footprint 19 was marked by a dynamic action conducted jointly by American and Croatian special forces on a hijacked vessel 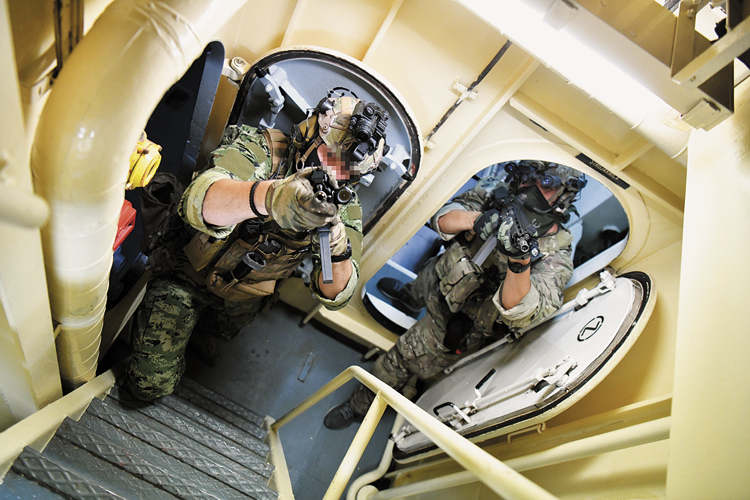 In a string of international exercises held in Croatia last month, Trojan Footprint 19 may be labelled as the most discreet one. It passed in silence, without any announcements or press releases, as is the custom in units organizing and conducting it. Although CROMIL’s team received an invitation from the Special Forces Command to follow a portion of the exercise on June 18-19, we possessed little information about it. Written in a formal military style, the invitation only said that Croatian special forces and their partners would conduct joint training in planning and executing operations, the purpose being the increase of their interoperability. After a short search on the internet, we learnt that the U.S. Armed Forces had organized an exercise of the same name in Poland and the Baltic in 2016 and 2018, respectively.

We arrive at the headquarters of the 2nd Special Forces Group, Special Forces Command in Fleet Admiral Sveto Letica – Barba Barracks in Split. The operation centre is situated in a tent pitched next to the headquarters. Accessing the tent is prohibited, while those to whom access is granted must leave their smart devices in a compartment at the entrance. Around the tent, we see not only members of the 2nd Special Forces Group, but also their colleagues in similar T-shirts and uniforms. From the patches and inscriptions on their uniforms, we deduce that they are members of the United States Army Special Forces. We receive some information from a Special Forces Command officer in charge of conducting the exercise. Trojan Footprint 19 is being held in Bulgaria, Croatia, Hungary and Romania. Along with the special forces from these countries, which have established a joint command, participants also include special forces from North Macedonia, Slovakia, Slovenia and the USA. The exercise is a continuation of Black Swan, another exercise that kicked off on 4th June with participants from all of the aforementioned countries, except for the US. Of course, the scenario is divided into several parts taking place in multiple locations. The Special Forces Command is participating in operations at sea or on the shore. By the time we arrived, the 2nd Special Forces Group, in association with the Croatian Air Force, had conducted several tracking, identification and special reconnaissance activities from air, land and sea. Owing to those preparatory activities, they successfully seized a base belonging to the opposing force and learnt that insurgents had hijacked a vessel, filled it with explosives and were planning on blowing up a naval base with it. “At the moment, the vessel is in the aquatory of the island of Žirje. An American team and a Croatian team are to seize it, free the crew and prevent a disaster. We shall be assisted by the Croatian Air Force’s Kiowa Warrior helicopters. For the Special Forces Command, this is the final and most complex operation in Trojan Footprint. We need to clamber aboard, overpower an unknown number of insurgents and seize the vessel so that no hostages are hurt and so that the explosive does not get activated,” our interlocutor explains, visibly pleased with the course of events so far. “For the first time, we have included the Croatian Air Force into our operations. With their great detection, observation and tracking capabilities, the Kiowa Warrior helicopters are our eyes in the sky.”

In order to follow the activity, we have to join the opposing force. After a briefing, we set off to the harbour and embark Oluja 2, the Special Forces Command’s rubber speedboat with a hard bottom. The voyage is no excursion; we sail fast, but feel safe for the boat is steered by experiences members of the Special Forces Command, while no winds are waves are in sight in mid-Adriatic. After sailing for some time between Žirje and the coast, we detect the hijacked vessel: the Krka, Croatian Navy’s landing ship / minelayer. No other vessels are visible, since seaborne traffic has not been multiplied by tourist boats yet. We settle down in a sitting room and receive instructions on security precautions. The important thing is that we stick to precisely determined isolated areas and wear lifevests or lifebelts, lest special forces mistake us for the members of the opposing force. The sun has set and the Krka gets under way to Split, meaning that the exercise may commence. “The conditions are excellent,” says one of the Americans when commenting the fair night sky and the moonlight.

We do not know when the action will kick off. We hear murmurs that it might happen before midnight. However, hours go by without anything happening. We pass the time chatting. It is nice to hear American soldiers from the 19th and 20th Special Forces Group speak highly of Croatian soldiers, even those from other arms of the Croatian Armed Forces. Croats left a positive impression on the Americans during this exercise, but also in their previous encounters during international operations and exercises, particularly in Afghanistan. We sail on with a speed of 10-12 knots and suddenly hear the sound of Kiowa Warrior helicopters. However, nothing happens and the helicopters fly away quickly. Everyone is growing tired and sluggish. Finally, at around 1:30 a.m. the vessel’s alarm bell, followed by shots, stirs everyone out of their lethargy. Human voices and shrieks are hardly heard. We spend ten minutes in isolation, but are soon given an opportunity to observer the resolution of the hostage crisis. American special forces, masked and fully equipped with night vision goggles, communication devices, combat helmets, tactical vests, the M4 carbine and various gadgets, break in and let the insurgents have it (using airsoft guns, of course), while the hostage is unharmed.

At last, we are allowed to go on deck, from where the special forces are controlling the majority of the vessel. We make out the outlines of two rubber speedboats on the quarters of the Krka. On the ship’s rail, we notice fluorescent lamps discreetly shining light on a ladder made of cords and boards, which the special forces had used to clamber aboard. The bodies of insurgents who had attempted to put up resistance are lying about. The moonlight makes the soldiers appear like astronauts. It is difficult to distinguish American and Croatian special forces, for their equipment is similar. Croats are using HK rifles and, just like Americans, are wearing classic uniforms with a digital print, instead of their usual MultiCam uniforms. The soldiers are communicating with one another in muffled voices or through gestures. In the chaos that we have fallen into, we have forgotten to check how far the vessel has sailed, i.e. where the night action began and ended. The Google Maps app tells us we are close to Split, on the southern side of the island of Čiovo. Finally, we are given an chance to speak with the soldiers who had successfully carried out their task. We learn that the main part of the exercise lasted only a few minutes. However, maximum security is required; surprise may lurk behind every corner of the vessel, which is large and suitable for concealing all sorts of threats. We also witness the questioning of one of the free hostages; until identities are confirmed, nobody is to be trusted.

Both the training group and the role players have carried out their tasks in accordance with the plan; no traumas or injuries were sustained. American and Croatian special forces acted swiftly, quietly, discreetly, jointly and murderously effectively under the cover of the night. Then again, that is what they are famous for. 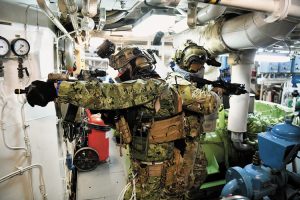 Wednesday, 3 a.m. The two teams assemble on the stern of the Krka and prepare to embark the rubber speedboats. They are still wearing masks and do not wish to expose their faces to our cameras. “We are professionals. We are not here to take photographs or write books about what we do and how we do it,” one of the Americans tells us. The Croatian Special Forces Command shares this sentiment. We were honoured to have observed special forces undertake such a demanding and complex operation. The night of the special forces has left a deep, lasting footprint on exercise Trojan Footprint 19.