Back to homepage »
Share:
“Tigrovi” - the first Croatian combat unit, established as early as on 5 November 1990 and based in the Barracks “Rakitje”, is marking 30th anniversary 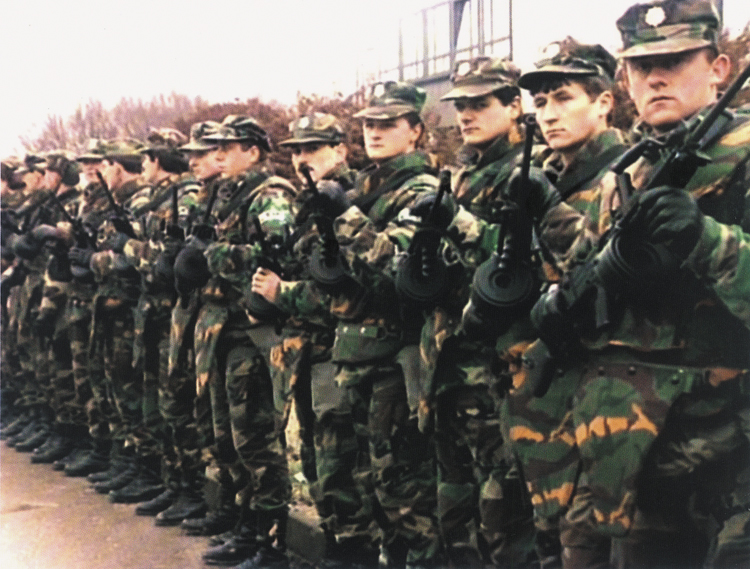 “Tigrovi” – the first Croatian combat unit, established as early as on 5 November 1990 and based in the Barracks “Rakitje”, is marking 30th anniversary. Its continuous history runs from the Special Purpose Unit of the Ministry of the Interior (better known as the “Tigrovi” from Rakitje) as the core of the 1st Guards Brigade of the Croatian National Guard, to the present day’s 1st Mechanised Battalion “Tigrovi” of the Guards Mechanised Brigade, the bearer of the glorious fame and path in the spirit of their motto “For Croatia like a tiger!”

“Tigrovi” were established in the early days of the Croatian state, and their story is a story of the growth of the victorious Croatian Army, passed on from generation to generation. They will be remembered for  combat spirit and their unique wartime motto: “For Croatia as a tiger”, and also for the heroes issued from the Brigade and the freedom they earned.

Some 300 volunteers from throughout Croatia gathered in the Rakitje base on 5 November 1990. The political situation in Croatia which did not allow establishment of military units and the solution were courses administered for police forces and an establishment of a unit for special purposes of the Ministry of the Interior, increasingly known as “Tigrovi”.

In late autumn 1990 Tigrovi undertook exhausting physical preparations and military training, secured the crucial facilities in Zagreb. The Brigade comprised several companies, commanded by Marijan Mareković, Jozo Milićević, Zdravko Andabak and Damir Šimunić, while the Battalion was commanded by Darko Rukavina and Josip Lucić. At the time “Tigrovi” and the Anti-terrorist Police Unit were the only police and army formations, which assumed more military tasks preventing conflicts and incidents throughout Croatia.

In early spring 1991 the special forces of the Ministry of the Interior were sent to restore order in the area of the Plitvice lakes, where they entered a conflict with the rebelled Serbs, who had seized the tourist facilities in the National Park and blocked the road. The event recorded as “Bloody Easter” was a point of no return, and saw first death of a member of “Tigrovi” and the first death of the Homeland  War in general (policeman Josip Jović).

In summer 1991“Tigrovi” units are dispatched to Glina, Petrinja and Kostajnica in the Banovina region, and to east Slavonia (Principovac, Ilok) respectively.

A component of the 1st Brigade is engaged in defence operations in west Slavonian Battlefield until the Sarajevo Truce and international recognition of the Republic of Croatia on 15 January 1992. “Tigrovi” conducted successful actions in the battlefields near Novska and Nova Gradiška, particularly after the first tanks were introduced into combat, and neutralised the enemy defence and liberated several villages in one day.

The escalating war dispatched “Tigrovi” across the territory of Croatia. The Brigade became the backbone of all Croatian forces and activities.

A component of the Brigade was engaged lifting the blockade unblocking the barracks throughout Croatia, in Zagreb (including the notorious JNA Barracks “Maršalka”, which after the liberation became their main barracks), in Varaždin and near Bjelovar.

In April 1992 “Tigrovi” undertook attack operations in the Southern Battlefield to curb enemy advance towards Neum, Ston and Ploče. Their positions came under heavy enemy artillery attacks, and the soldiers waged heavy operations to control the elevations near the village Slano, which they liberated.

Amidst the hardest aggression the “Tigrovi” downed 15 enemy aircraft.

“Tigrovi” had a crucial role in deblocking Dubrovnik, and operated at the brigade level. In late October the operation culminated with landing in Cavtat and pushing the enemy from the dominant elevations at hills of Konavle.

In early 1993 “Tigrovi” take part in the Operation “Maslenica”, keeping control of the seized positions in the crags on Velebit Mountain, where one of the legendary commanders, Damir Tomljanović Gavran, was killed in combat.

In the Operation “Lightning” Tigrovi made feats in the west Slavonian territory, with which they were well familiar. Striking hard and swiftly the Brigade broke the enemy line, and within a two-day time span liberated the occupied villages and converged with the 3rd Guards Brigade in Okučani.

The traffic along the Zagreb – Lipovac motorway was restored after years and the entire territory of western Slavonia between Stari Grabovac, Nova Gradiška, mount Psunj and Stara Gradiška was liberated.

Early in the morning of 4 August 1995 the projectiles from “Tigrovi” artillery positions signalled the beginning of the victorious campaign of the Croatian Army. The 1st Guards Brigade advanced from several directions towards the Plitvice Lakes and two days later reached the Croatian state border and meets with the forces of the Army of Bosnia and Herzegovina at Tržačka Raštela, where the Commander of “Tigrovi” Lieutenant General Marijan Mareković shook hands with General Atif Dudaković, the Commander of the 5th Corps of the Army of Bosnia and Herzegovina. The gesture concluded the campaign and brought a sigh of relief for the population of the Bihać enclave.

The victorious path of “Tigrovi” – the Brigade with one sole privilege, to fight in the hardest actions and fulfil their combat tasks always “for Croatia like a tiger” – concluded in the liberated Plitvice lakes.

“Tigrovi” were the first in terms of the sacrifice they made, losing 367 members, 201 tortured in enemy camps, with 1,711 wounded members of whom 27 are 100 % disabled and six members are  still missing.

The memorial in the barracks of the “1st Guards Brigade Tigrovi – Croatia”, the place they went off to combat missions and returned to for short breaks only, stands as a lasting reminder of their huge sacrifice.