Back to homepage »
Share:
Of late, visitors to the museum in Gripe Fortress in Split can tour the former exhibition turned collection, which had originally been dedicated to the 150th anniversary of the invention of torpedo. The collection is also accompanied by a high-quality publication

The Croatian Maritime Museum is located on a hill that can be reached by a relatively short walk from the city quay in Split. Its premises are inside Gripe Fortress, an 18th-centuty attraction for all history lovers.

Would you happen to love museums, as well? The Croatian Maritime Museum is one of many small gems hidden all over Croatia; it is not as well-known as some other institutions, but it is certainly worth a visit. To make one thing clear: the museum’s collections are not rich in exhibits, which is a consequence of a number of events in the museum’s history (dating back to 1925) as well as the fact that the museum is currently looking for a more suitable location. In the world, it is customary for homes of maritime history to be located by the sea, in harbours. Nevertheless, any true friend and admirer of rich Croatian maritime history will find a lot of unique and interesting content in Gripe Fortress.

Although the accommodation issue is a secondary topic, it was impossible not to touch upon it during our visit to the museum, where we were welcomed by its curator Petra Blažević. Our visit was motivated by a specific reason – the museum’s torpedo collection. Earlier this year, the Croatian Maritime Museum had detached the exhibits related to that Croatia-made invention from the Armour, Weapons and Armour Systems Collection, thus honouring the fact that a century and a half had passed since Commander Ivan Blaž Vukić Luppis had thought out a system that went on to become the foundation of lethal weapons as well as the general development of technical culture and industry in the port city of Rijeka.

The project is Split is not the only one of this kind. A while back, exhibition First in the World: 150 Years of Rijeka’s Torpedo was jointly developed by the City Museum of Rijeka and the Maritime and History Museum of the Croatian Littoral Rijeka. We are sure that more similar initiatives exist, but for now, let us focus on the collection in Split. The room housing the collection in the museum is not big. In spite of that, Petra Blažević and her colleague Ljubomir Radić have done a good job with the collection, which grew out of the late 2016 exhibition The Adriatic, Cradle of the Infernal Device – 150 Years of Luppis-Whitehead Torpedo. 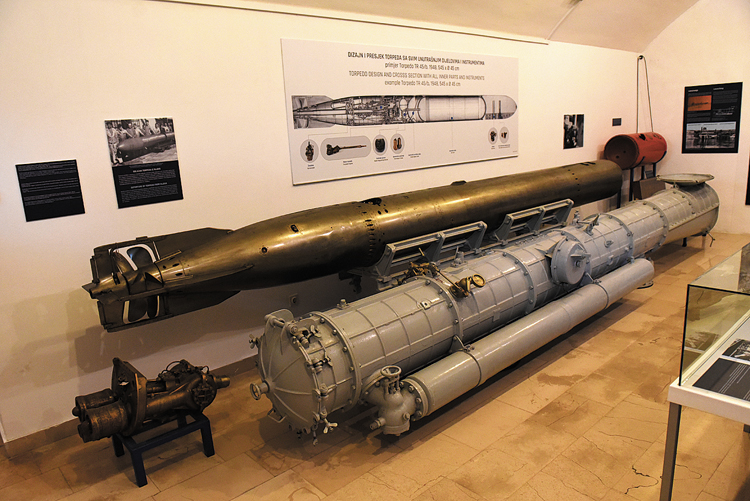 While touring the collection, one can see some old, valuable exhibits. Highlights are an 1866 torpedo warhead and an 1868 torpedo tail. Although they do not belong to the same system, these exhibits are the oldest preserved parts of the Luppis-Whitehead torpedo in the world. On the other hand, the combination of exhibits, descriptions, stories and photographs gives an insight into the construction, functioning and historic development of torpedo and much more. During a tour of the collection, which lasts between half an hour and a full hour, even a complete layperson can quickly attain above-average knowledge about torpedos.

What is more, the exhibition and the collection are not the only projects that Blažević and Radić have initiated with their associates and other institutions on the occasion of the 150th anniversary of the invention of torpedo. Published by the Croatian Maritime Museum and written by the aforementioned authors, a publication carrying the same name as the exhibition (The Adriatic, Cradle of the Infernal Device – 150 Years of Luppis-Whitehead Torpedo) was published in December 2018. It would not be an exaggeration to say that the publication’s one hundred large-format pages contain the authors’ final imprint on their comprehensive approach to the technological and historical significance of torpedo as well as the fact that it was devised in Croatia.

The bilingual Croatian and English publication brings an overview of the Split collection as well as exhibits found elsewhere in Croatia. Its task is to teach and pique the interest of all those who merely see torpedo as a weapon. For the authors, the basic idea of the exhibition, the book and the collection is the following: “Torpedo is an extraordinary invention, but its usage ought to be reduced and ultimately abandoned.”