Back to homepage »
Share:
Inspired by the tradition of Croatia’s historical cavalry units, the newly-appointed pilots on OH-58D Kiowa Warrior observation and reconnaissance helicopters co-operated with the Cravat Regiment’s Guard of Honour in choosing a scarf, a piece of Croatian light cavalry’s uniform, as their symbol. Pilots on OH-58D Kiowa Warrior helicopters are presented with a pilot scarf after the completion of their training and a combat firing practice 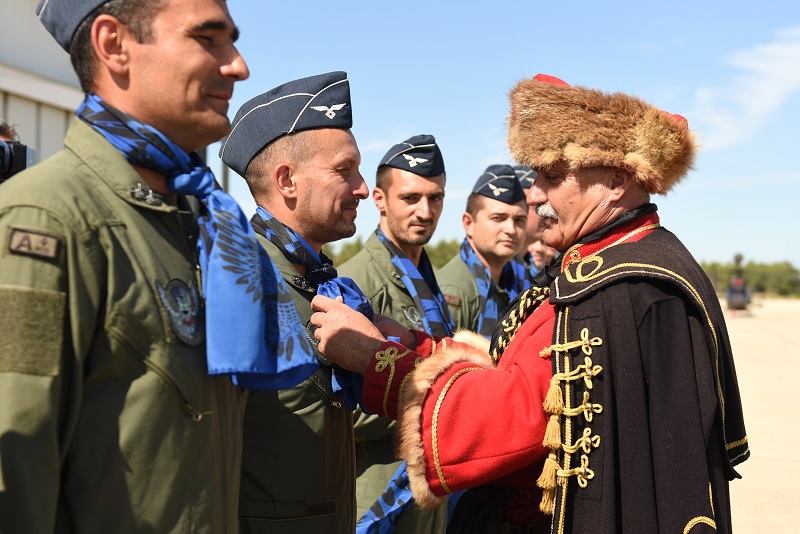 Newly-appointed pilots on OH-58D Kiowa Warrior helicopters were presented with their pilot scarves at a graduation ceremony held at Lt. Col. Mirko Vukušić Barracks in Zemunik Donji near Zadar, home of the 93rd Air Base’s Fixed-Wing Squadron, on 16th September.

The ceremony was attended by Deputy Prime Minister and the Minister of Defence Damir Krstičević, the Chief of Croatian Air Force Staff and Deputy Commander of the Croatian Air Force Brigadier General Michael Križanec, representatives of Zadar County and the City of Zadar as well as numerous guests from the military and civil sector.

The Cravat Regiment’s historical Guard of Honour lent solemnity to the presentation of pilot scarves by performing at the ceremony and tying a scarf around each graduate pilot’s neck. The pilot scarf thus became a recognizable symbol of pilots flying OH-58D Kiowa Warrior observation and reconnaissance helicopters. Inspired by the tradition of Croatia’s historical cavalry units, the newly-appointed pilots on OH-58D Kiowa Warrior helicopters co-operated with the Cravat Regiment’s Guard of Honour in choosing a scarf, a piece of Croatian light cavalry’s uniform, as their symbol. Pilots on OH-58D Kiowa Warrior helicopters are presented with a pilot scarf after the completion of their training and a combat firing practice. The design of the scarf is a product of joint efforts by the pilots from the Fixed-Wing Squadron, the Commander of the Cravat Regiment’s Guard of Honour Željko Matejčić and Mihaela Grnović-Novaković, Head of Design at Croata, Croatia’s premier tie brand.

In his address, Minister Krstičević emphasized that he was proud of Croatian pilots and technicians for successfully mastering one of the most contemporary and complex combat systems as well as introducing it into operational use in a short period of time. “This is yet another confirmation of Croatian pilots, technicians and instructors’ high level of professionalism and dedication – qualities that the victorious Croatian Armed Forces are known for,” Minister Krstičević pointed out. “I am proud of you, pilots on Kiowa Warrior helicopters – the air cavalry of the Croatian Armed Forces. Beside your professionalism, I also wish to commend your initiative in adding a new dimension to the preservation of the Croatian historical military units’ tradition by choosing a recognizable symbol of Croatia as a part of your uniform.”

General Križanec complimented the pilots on his own behalf and on behalf of commanders at the Croatian Air Force. He underscored that faith, professionalism and dedication had allowed resources, personnel and training to be pooled in the development of a new military capability. The credit for that went to aircrews, technical personnel and commanders at the 93rd Air Base as well as personnel at the General Staff of the Croatian Armed Forces and the Ministry of Defence of the Republic of Croatia, who had had faith in the Croatian Air Force throughout the process. “Today, you have proven worthy of our trust,” said General Križanec.

The Commander of the Fixed-Wing Squadron Lieutenant Colonel Davor Gren extended special appreciation to American flight instructors who had passed their tactics, techniques and procedures onto Croatian pilots and technicians, thus enabling them to master one of the most complex and sophisticated weapons systems. “The new capabilities acquired through the introduction of Kiowa Warrior helicopters into operational use are yet to burst forth in Croatian skies,” said Lieutenant Colonel Gren.

American flight instructors presented Croatian pilots with replicas of an American cavalry sabre and a basket-hilted sword used traditionally by the Croatian cavalry. American thus once more gave praise to Croatian pilots for their professionalism, expertise and fast acquisition of knowledge in all phases of training, with particular emphasis being placed on Croats’ achievements in field firing and bombardment practices.