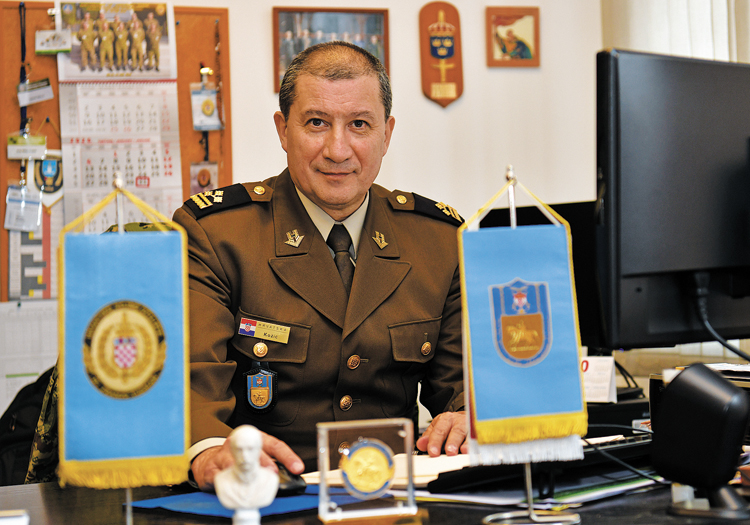 The Croatian Defence Academy “Dr. Franjo Tuđman” marked the 28th anniversary of its establishment at the end of last year. The Academy’s highest military school is the War College Ban Josip Jelačić, educating senior officers and civil servants from the Republic of Croatia and abroad. In an interview with its Head, Colonel Mijo Kožić, we will hear more about the work and students of the College.

What is the mission and vision of the Ban Josip Jelačić War College, and what is the emphasis on when it comes to educating top civilian and military officials?

The Ban Josip Jelačić War College is the highest military education institution in the Republic of Croatia, which trains senior officers of the Armed Forces and other Government officials to be recognised as future strategic national-security leaders.

The College is the forum for the sharing of the military and civilian knowledge, experiences and skills at the level of the Croatian Armed Forces and wider.

Particular importance is attached to education of students to become competent strategic leaders able to think critically and provide creative solutions to emergency and crisis situations as well as to act in security risk management processes.

In accordance with the War College Curriculum, the main goal is to systemise and improve the existing competencies and develop new competencies to deliberate and act at the strategic level, both in the national and international environments.

What does the education curriculum administered at the War School cover?

During their study period at the War College, the students write a series of seminar papers on topics concerning the current national and the EU security and security in the areas hosting NATO-led operations and missions; provide opinion on the future development of the Croatian Armed Forces or proposals for update of the related strategic and doctrinary documents.

Who teaches at the War College?

In addition to the teaching staff of the Croatian Defence Academy, its reputation is enhanced by the visiting lecturers, including distinguished university teachers, highest officials of the Republic of Croatia and of the Croatian Armed Forces, Croatian diplomats and foreign diplomats accredited to Croatia as well as senior officers and officials of foreign armed forces and NATO.

War College is often a forum for lectures on current situation and for confronting viewpoints and opinions related to political, military and social issues.

The lectures by distinguished visiting lecturers confirm the strategic level of the education administered by the War College and complement and update its curriculum.

The War College also hosts a number of visiting lecturers.

Alongside Croatian Government officials, we host lecturers from the international institutions that Croatia belongs to (namely NATO and the EU) and from other partner countries, who contribute significantly to the building of knowledge and attitude required for military service.

Among the lectures I would  single out are those delivered  by Major General Timothy Bevis, The Plans and Operations Director of the NATO International Military Staff, who briefed the students on NATO’s adapted politico-military structure, NATO Command Structure and Force Structure, the decision making processes, consensus practice and procedures toward consensus among the member nations, the main elements of NATO Crisis Response System and the lessons learned from NATO-led missions and operations.

Another remarkable lecture was by Professor Larry P. Goodson (US Army War College – University of North Carolina, Chapel Hill), whose field of research is the military and political situation in the Middle East and who chaired the Department of National Security and Strategy of the U.S. Army War College “Dwight D. Eisenhower” in two mandates, and has delivered over 100 lectures in the U.S. and worldwide.