Back to homepage »
Share:
NATO and Partnership for Peace NCOs gathered for the jubilary 10th International NCO Camp in the Barracks “Fleet Admiral Sveto Letica-Barba” in Split from 31 August – 7 September 2018. The Camp was devised as a combination of a two-day study and exchange of experience […] 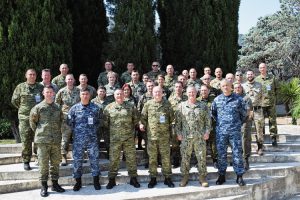 NATO and Partnership for Peace NCOs gathered for the jubilary 10th International NCO Camp in the Barracks “Fleet Admiral Sveto Letica-Barba” in Split from 31 August – 7 September 2018. The Camp was devised as a combination of a two-day study and exchange of experience followed by a practical module in which the participants applied the acquired knowledge and developed practical skills.

As many as 25 NCOs from eleven countries attended the 10th International NCO Camp held in the Barracks “Fleet Admiral Sveto Letica-Barba” in Split from 31 August – 7 September 2018.

The nine-day camp gathered NCOs from Albania, Austria, Bosnia and Herzegovina, Kosovo, Hungary, Macedonia, Germany, Poland, Slovenia, the United States and Croatia as host country. The participants were NCOs with a rich experience with leadership duties and from the international operations, who operate within the NCO support channels of their armed forces.

The main purpose of the Camp is to exchange experiences among NCOs of NATO and partner nations. “The Camp is a perfect opportunity for us to present our work, exchange experiences and show our commitment to our duties“, said Command Sergeant Major Elvis Čanković, the 93rd Air Base Senior Enlisted Leader. Having been included in the NCO Camp since the very beginning  – first as participant, and later as administrator  – Command Sergeant Major Čanković saw first-hand the importance for the development of NCOs over the past decade. The Camp was devised as a combination of a two-day study and exchange of experience followed by a practical module in which the participants applied the acquired knowledge and developed practical skills.

During the theory module the participants present their national NCO corps and chains of support  and it where when they learn the most, familiarising and comparing their own experiences to those of other NCOs.  “The events  of the kind offer us the opportunity to learn a lot that we can later apply both  in our duties and in life in general,” said Sergeant First Class Saša Sovec of the Croatian Air Force Command. Each year guest lecturers from various countries and organisations within NATO are invited to take part in the camp and in 2018 it was the representatives of the NATO Allied Command of Operations, the USEUCOM, the Office for Defense Cooperation of the United States Embassy, of the ​​Minnesota National Guard, of the Slovenian Armed Forces and of the  Kosovo Security Force. One of the main objectives of their presentations was the upgrade  of the NCOs leadership skills. 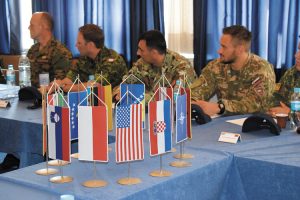 “The lesson No 1 for NCOs is the attitude“, said Command Sergeant Major Douglas Wortham, the Minnesota National Guard Senior Enlisted Leader.“A NCO may be capable and adept doing an excellent job but that does not mean he/she is an efficient leader.  It takes an attitude and choosing the qualities that he/she will apply in his/her work, such as integrity or altruism. These are the qualities that make a leader more than skills“. The leadership skills and team work were showcased in the physical activities that followed the lectures. This year the participants took the training in maritime navigation, sailing, diving, knot tying, rescue of drowning persons and rowing the cutters under the supervision of the  instructors of the Croatian Navy and of the Special Forces Command. Through joint practice of the rescue or of synchronised steering of a vessel with 20 oars the participants also learned to overcome language and cultural barriers towards the common goal.

The Camp also featured an orienteering march to the island of Čiovo, the shooting practice with the Croatia-made automatic rifle and pistol in the Training Range “Crvena zemlja” near and flew aboard the helicopters of the 93rd Air Base at Zemunik, and the participants spent free time seeing the sights of Split and Knin. The activities and assignments brought them closer together, which was one of the main objectives of the Camp in the first place. “People connect and exchange experiences best during informal talks or while solving problem together“, explains Command Sergeant Major Čankovic. Sgt Sovec seconds that: “The biggest benefit offered by the Camp is making new contacts,  meeting the people we are possibly meeting again in a mission and the former acquaintances can significantly facilitate co-operation“. In conclusion – the Camp has provided the participating NCOs with new knowledge and acquaintances which they will find useful in their future work and which explain why the Camp is in its tenth year, and will run in the decades to come. 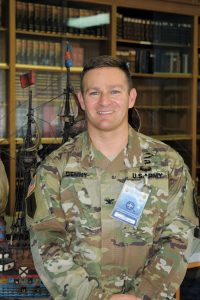 COLONEL MATTHEW DENNY, CHIEF OF THE OFFICE FOR DEFENSE COOPERATION OF THE U.S. EMBASSY, VISITING LECTURER

Attended the NCO Camp for the third consecutive time   ; in the 2018 Camp Colonel Denny delivered a lecture a presentation on training programmes, education, military exercises and regional initiatives  managed by the Office for Defense Cooperation.

The Camp is an excellent great opportunity for NCOs to come together and discuss various  challenges that they’re having, whether it’s with training or human resources or the preparation of forces for deployment, and to establish relationships with each other. 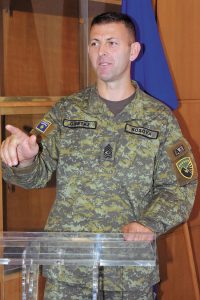 The Summer NCO Ccamp is a great opportunity for senior NCOs see how things have worked in the past, what could be better for the future, how to prepare for the future and what the key issues that we need to take into consideration are. 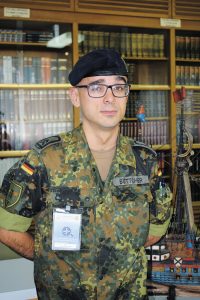 Every training – doesn’t matter where, doesn’t matter when – can help you both personally and professionally. In the German Air Force, we say: “We need to learn our entire life. Working with different nations in NATO, I have learnt that every chance you get to work with other nations and share your experiences, has an enormous value“.