Back to homepage »
Share:
The 7th International Senior NCO Camp for NATO and Partnership for Peace nations took place in the Sv. Nikola“ Barracks in Split from 30 August to 7 September 2015. “The main objective of the Camp was to promote international co-operation of NCO corps and upgrading […] 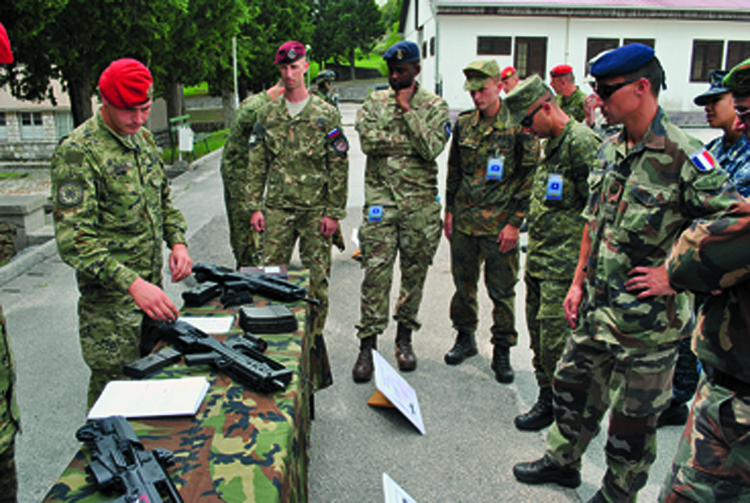 The 7th International Senior NCO Camp for NATO and Partnership for Peace nations took place in the Sv. Nikola“ Barracks in Split from 30 August to 7 September 2015.
“The main objective of the Camp was to promote international co-operation of NCO corps and upgrading the level of specific knowledge, the exchange of experience and broader familiarisation“, said Sergeant Major Boris Škokić.  Croatian Navy CSM and co- organiser.  “Upon arrival to a theatre of operations there is no time left for major changes and we have to act jointly as allies. The Camp has been designed in that sense“, says the Navy CSM. The Camp offered basic naval skills, the handling of the weapons used by the Croatian Armed Forces and other tasks and activities aimed at upgrading the NCO abilities and competence“.
The 7th Camp saw a record number of participants,  said Sergeant Major Dominik Ban, the Camp Organiser.  Of the 20 participating NCOs  five were  from the Croatian Armed Forces and 15 from other countries – from Bosnia and Herzegovina, Slovenia, Kosovo, Macedonia and Montenegro and from the United States, France, the United Kingdom, Germany, Hungary, Canada and Afghanistan respectively. The Camp hosted lecturers from Afghanistan, the United States, Slovenia, the EUCOM and Sergeant Major Davor Petek the present ACO Senior NCO and former Croatian Armed Forces  CSM.
Among the participants were the sergeant majors of the services of the Croatian Armed Forces as well.
“In my view we have fulfilled the goals we set for the Camp. We also took the opportunity to familiarise the participants with the local historical and cultural heritage, and took them to see the Knin Fortress, around Split and the island of Brač, while some of them visited Zagreb as well“, stressed the organisers. “The Camp participants were briefed on the services and units of the Croatian Armed Forces, took part in the training events and observed a series of demonstration exercises“.
The 7th International NCO Camp was concluded with the presentation of the respective certificates to the participants and visiting lecturers, by the Croatian Armed Forces CSM,  Major  Sergeant Major Dominik Ban.  The organisers announced even bigger number of participants next year.