Back to homepage »
Share:
In the CAF one often meets individual members with remarkable commitment to duty, and with a broad spectrum of interests, who set an example and are role models to anyone who meets them. One of them is 1st Sergeant Robert Barbir nicknamed Rambo 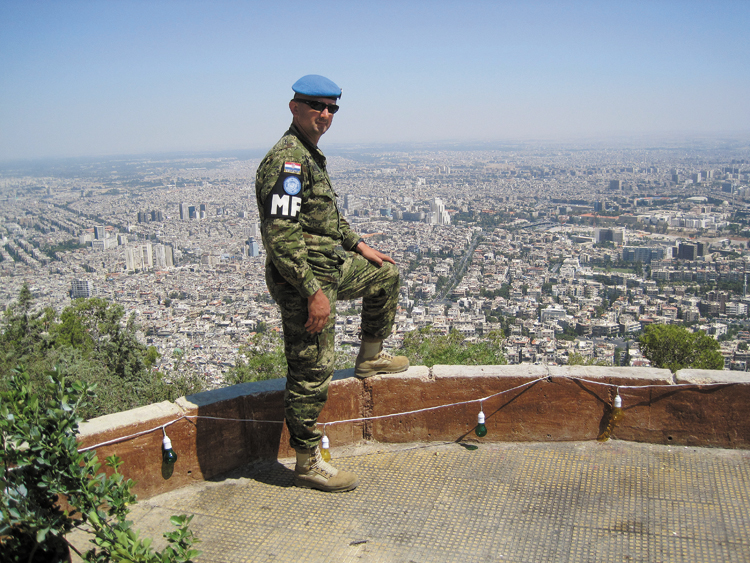 Before even meeting 1st Sergeant Robert Barbir Rambo, we heard from his colleagues that he was a “model” military police officer. And indeed, on first meeting him it was clear– his stance, the way he walks, and the communication with other people fully justify the commendations. However, 1st Sergeant Barbir receives the compliments with embarrassment, as all these qualities go without saying. “The army is a reflection of the country. It means discipline and commitment, and whenever on duty I stick to that”, says 1st Sergeant Barbir.

“As a child I lived in the countryside, surrounded mostly by people older than me so I had no one to play with. I was a child of nature, I made spears, arrows, traps”, says 1st Sgt. Barbir, convinced that his childhood survival plays somehow predicted his later enlistment into military service. “The war movies I watched as a child also shaped my decision to become a soldier, but a peacekeeper soldier, was becoming stronger and stronger”. His nickname – Rambo – was given to him by his school mates, having seen the films on the TV on the character who bore a striking resemblance to him.

His wartime history began with joining the 1st Company of the Naval Infantry Company of the Croatian Navy, in the  Ploče Navy Port, established in October 1991, which was the first unit of the Croatian Army (then Croatian National Guard) manned by conscripts. During 1992 it operated in the south Battlefield, from Šipan and Ston to Bistrina. His abilities quickly became evident, and so he was soon promoted to corporal of the guard and deputy commander of the Company.  “We only had the carbines from the World War II available, with which we believed we could destroy tanks , so strong was our enthusiasm. We were guided by a youthful zeal and desire to live in a sovereign and free Croatia”, he says. 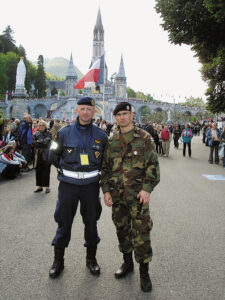 After completing his military service 1st Sergeant Barbir remained in the ranks of the Military Police, to defend his homeland. He took his first training with the first group of 40 members of the Military Police Corps from all over Croatia in the Training Centre in Delnice in 1993 and completed the MP Authorised MP Course, where he was awarded the pistol with the dedication by the Head of the Military Police Directorate as the best performing trainee, and embarked on his MP officer career which has continued to this day.

In view of his almost 30-year long service we would see him as a witness of the times, so we asked him about his view of the Croatian Armed Forces today: “We rose from the scratch, and today we stand side by side with the world’s strongest. We may lag in terms of equipment, but the quality and the personnel can keep pace with NATO and other organisations member nations”.

His favourite period in the career are international missions: “Multinational environments are the finest for me, for the dynamics, encounters with various people and cultures, observing familiarising with the attires, breaking taboos and challenges … If I could go to a mission again, I would get ready in a minute”.

He was deployed to the mission in the Golan Heights in Syria in 2011/2012, at the time of ravaging conflict in the area, and his three tours in Afghanistan earned him the “Three-star Veteran” status.

“Whenever I go abroad, I represent my homeland, my unit, family and region first and myself, in that order. That’s the rule I follow.” The second rule is familiarisation with the area. I always stick to the same ritual: “Give me two weeks to make a 360 mapping of the area and to take a close look at the situation. You can trust me that knew every hole and rock in Afghanistan”.

He asked us to commend his English teachers at the Croatian Armed Forces’ Foreign Languages School in Split, and stressed that the proficiency in English was ability much to his advantage. Guided by his idea of a peacekeeper Sgt. Barbir launched a number of charity campaigns in missions, most often for the children and the people in need.

Friends all over the world 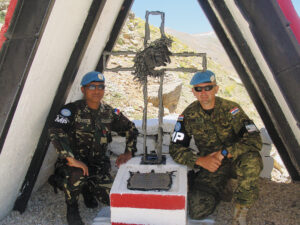 Watching his memories from the missions where he served, among which a video in which he teaches a Philippine soldier sing Croatian songs or photos depicting him teach his colleagues from the mission bake bread, one is caught in the impression that off-duty Sgt Barber is a born initiator and entertainer. He has friends from all over the world, which helped him a great deal with his hobby – Sgt. Barbir is a passionate collector of military uniforms, badges, flags, coins, with some 120 camouflage military uniforms in his collection at the moment.

“I don’t know how to really describe how I do it. We all help each other with the collecting.  Right now I am collecting berets from Croatia for a Polish collector. I got him a few berets from Switzerland, and am now waiting for a Japanese colleague to send me one from their army as has no berets from Asia”.

He exchanged a lot of items at eight military pilgrimages in Lourdes he attended. “My first pilgrimage to Lourdes was in 2008, at the jubilary 50th event. I have no words to describe it – Lourdes is really a place for people to find the peace, which is why I went again so many times. It is also a perfect place for us collectors”, says Sgt Barbir.  “You know, after all these years serving in the military everyone thinks that retiring will be hard for me, but I think that my hobby will make it enjoyable. Sgt. Barbir is writing a book about camouflage uniforms, but it will probably take time, bearing in mind his many engagements.

We thought it would be difficult for him to choose a favourite exhibit, but he readily showed us a coin in the shape of Afghanistan with the United States and Afghan flags on one side and with figures of soldiers, NCOs and officers in Afghan hills on the other. The coin is of great value to him because it was given to him by the U.S. Army Colonel Cedric Carrington, whom he respects deeply. In our further talk with Sgt. Barbir about his off-duty activities, we got the impression that his day lasted for 48 hours. “Austrians once gave me the nickname Duracell. I am always on the move, since early morning”, he says laughing.

Along with the wartime companions Sgt. Barbir works in the association “First Conscript of the Croatian Army – Ploče”, with the aim of obtaining recognition for their status as first conscripts in Croatia ever. They achieved it in 2014. The Association often organises humanitarian donations, and each year on 18 November they visit Vukovar, which has a special place in his heart, so he attaches importance to marking the date, whether he is in Croatia or in missions, so in 2015, during his term in Afghanistan he marched for 18 km carrying full equipment. He is also a member of the Stablin Boatmen’s Association, while his special passion – much to our surprise – are carnival festivities. Each year he and his team take part in the Baćina Carnival, where they give let off steam and work hard to present creatively their dotty ideas. He also does some agriculture work, cultivating tangerines and producing olive oil. It all makes part of his daily routine. We were impressed with the stories, experiences and the energy of this exemplary member of the Croatian Armed Forces, but we also somehow felt that it was not all. 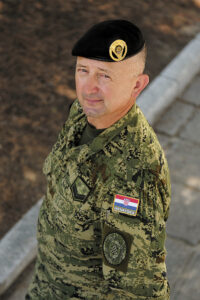 Sgt Barbir’s wartime history began with joining the 1st Company of the Naval Infantry Company of the Croatian Navy, in the Ploče Navy Port, established in October 1991, which was the first unit of the Croatian Army manned by conscripts 1st Sergeant Robert Barbir Rambo is a passionate collector of military uniforms, insignia, flags and coins. His collection presently comprises some 120 camouflage uniforms.  His favourite period in the career are international missions: “Multinational environments are the finest for me, for the dynamics, encounters with various people and cultures, familiarising with the equipment, breaking taboos and challenges … If I could go to a mission again, I would get ready in a minute”.