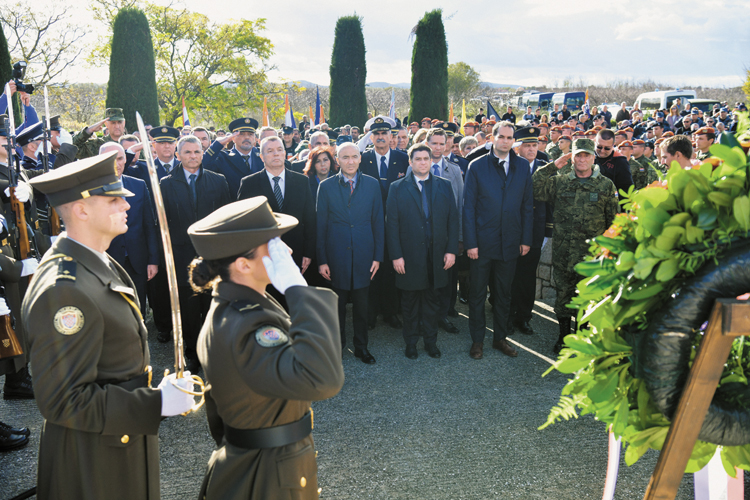 On 18 November  2019 many locals, veterans, members of the Croatian Armed Forces  and friends from all over Croatia came to pay respects to the victims of Škabrnja. The anniversary of the massacre at Škabrnja during the Homeland War was marked with a commemorative ceremony and a three-day memorial march of members of the 3rd Mechanised Battalion “Pauci“ of the Guards Mechanised Brigade from Knin to Škabrnja.

The memorial march was walked with dignity and deep respect along the 18 November 1991 Street in Škabrnja to the Memorial Monument at the mass grave , where the delegation of the Union of Association of Croatian Civilian Victims of the Homeland War  laid wreaths and a mass was recited in the Church of the Assumption of the Blessed Virgin Mary for the  victims of the Homeland War, recited by Mons Želimir Puljić, Archbishop of Zadar.

Mons. Puljić in his homily recalled the centuries of suffering of Croatian people and the suppression  of its cultural, historical and religious identity. The Croatian people  never accepted it – today we  enjoy  freedom and independence thanks to the courage of Croatian defenders. The day of 18 November is associated with the occupation of the heroic Vukovar and Škabrnja – the two places of profound suffering, but we had our sacred values that relied on for strength and comfort. Vukovar and Škabrnja succumbed to, but Croatia resisted  thanks to the courage of its defenders. The church bells are calling us today to pray for the fallen for the victims of the Homeland War to whom we owe freedom fenders. Today, church bells are calling us to pray for all our victims in the Homeland War because we owe them our freedom. It is our obligation to pay respects to our heroes and to tend  to their tombs“,  said Mons  Puljić.

The visitors walked the symbolic memorial march titled “Step by Step“ to the local cemetery of St. Luke, where a ceremonial programme was performed to commemorate the massacre committed in Škabrnja on 43 civilians and 15 defenders on 18 November 1991.  The defence of Škabrnja took the lives of 36 Croatian defenders (members of the Self-Standing Battalion of Škabrnja and defenders from the neighbouring municipalities) and 56 civilians and six  more who got killed in mines explosions.

The roll of honour and respects to the military and civilians killed in Škabrnja  by delegations of the President of the Republic, of the Croatian Parliament and of the Government of the Republic of Croatia, as well as by representatives of the Municipality of Škabrnja, of the Self-standing Battalion of  Škabrnja, of the associations of Croatian volunteer combatants, of the Union of associations from the Homeland War, and of the Zadar County and of the City of Zadar.

Battalion “Pauci“ marches to commemorate the victims of Škabrnja 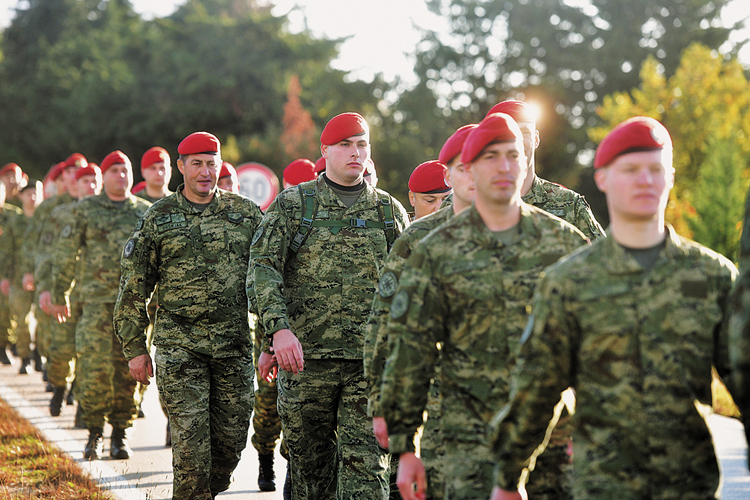 The 28th anniversary of the massacre at Škabrnja was also marked with a symbolic three-day march by 57 members of the 3rd Mechanised Battalion “Pauci“ of the Guards Mechanised Brigade and a unit of the 1st Mechanised Battalion “Tigrovi“ paid tribute to the victims by the symbolic three-day 75-km march from Knin via Kistanje and Benkovac to Skabrnja was carried out in several stages. Minister Krstičević and members of the Association of Veterans of the 4th Guards Brigade joined the participants in the last stretch of the march near Benkovac and paid respects to the fallen fellow-combatants.

The symbolic march marking the 28th anniversary of the massacre at Škabrnja during the Homeland War was an idea of the soldiers and NCOs of the 3rd Mechanised Battalion “Pauci“ to pay  respects to the fallen defenders and other victims.

At the to Škabrnja  Minister Krstičević stressed: “The hearts of all Croatian soldiers are with the victims of Vukovar and Škabrnja ,  who must never be forgotten. I am proud of the young soldiers, who demonstrated the strength and the character of the Croatian soldiers walking this demanding march. Croatia is guarded by the powerful and respectable armed forces, formed in the Homeland War. ”

The commander of the Guards Mechanised Brigade, Brigadier General Tihomir Kundid expressed appreciation to “Pauci“ for the initiative and said that the greatest value of the walk were the young  members of the Croatian Armed Forces – still very young at the time of the Homeland War – who themselves initiated the walk under the motto of : “Pauci for the Sacrifice of Škabrnja“.

“It was our way to  commemorate and pay respects to the victims of the massacre committed at Škabrnja and also to send a message that the Croatian Armed Forces respected its history and tradition, particularly the Homeland War.  The march showcased that we have a strong military, trained and ready to respond to any challenges and tasks. It was hard, but the soldiers diplayed endurance, a strong will and psychological and physical stability in completing it impeccably”, said Brig. Gen.  Kundid.

A young member of the “Pauci“ Battalion Private Marina Ivica shared her pride over walking the march: “We have paid respects to the victims of Škabrnja and Vukovar and we wish that the march becomes a tradition. We wante to offer eted the walk to become a tradition“.