Back to homepage »
Share:
The North Atlantic Treaty Organisation was founded 70 years ago. The summit In London was more than a ceremony marking the seven decades but also featured a series of meetings and other activities

NATO meeting in London was not only a ceremony to mark the seven decades of NATO but entailed, as regularly, a series of meetings and other activities. The world media highlighted the disagreements  between ons of individual member nations, with different histories, different geography and different political parties in power but decisions in NATO are taken by consensus. NATO Secretary General Jens Stoltenberg also highlighted it: “We have had disagreements in this Alliance since the Suez Crisis in the 1950ies, to the Iraq War in 2003“.

“Regardless of the disagreeing opinions NATO is strong”, said Prime Minister Andrej Plenković, who headed the Croatian delegation at the meeting, composed of the Deputy Prime Minister and Defence Minister  Damir Krstičević, by the Foreign and European Affairs Minister Gordan Grlić Radman, the Deputy Prime Minister and Defence Minister  Damir Krstičević, the Chief of the General Staff of the Croatian Armed Forces General Mirko Šundov,. “There is cohesion inside NATO, there is also the commitment to Article V as well as to other provisions of the North Atlantic Treaty, whereby the member nations obliged themselves  to invest into defence and to help each other in the event of a crisis situation“, said Prime Minister Plenković. 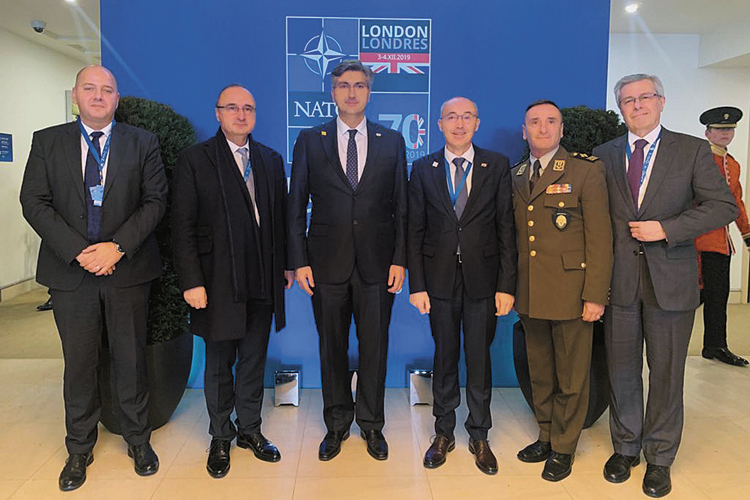 The dominant topics of the meeting  was increase of budget allocated for defence purposes.

The investments for modernisation and strengthening of the Croatian Armed Forces  are not just  formal fulfilment of the commitments towards the Alliance:“For us it is important that the Croatian Armed Forces  guarantee our security, and freedom won with the sacrifice by Croatian defenders, while NATO membership and Article V provide the collective security which today and in future will prevent any aggression against Croatia as the one experienced in the early 90-ies. The contribution to the collective security is mutual, and Croatia has proved its credibility through the fact that it has presently deployed 250 soldiers in NATO-led missions and operations“, emphasised Prime Minister Plenković.

The North Atlantic Treaty was founded by 12 member nations 70 years ago, in the early days of the Cold War. The Alliance is soon to embrace the 30th member  –  North Macedonia.

“As the world changes, NATO will continue to change“, concluded Secretary General Jens Stoltenberg. The next summit will be held in 2021.

From the London Declaration:

Some of the highlights from the Joint Declaration endorsed by the heads of state and government at the London meeting as presented by NATO Secretary General:

NATO is addressing the breadth and scale of new technologies and of critical infrastructure and communications (including 5G, network); space has been declared an operational domain of NATO;  China’s growing influence has been recognised, presenting both opportunities and challenges that t needs to be addressed at the level of the Alliance.

The meeting of the heads of state and government of NATO member nations  held in London from 3 -4 December 2019 was not formally a summit, a common designation for NATO summit meetings of this level, though  essentially  it was the 29th summit held since 4 April 1949 which saw the establishment of the strongest military alliance in history. Interestingly, even the founding event in Washington was not referred to as summit either. The first nominal summit was held much later, in Paris from 16 – 19 December 1957, and the second one  in Brussels 17 years later (26 June 1974), after which the summits assumed a more regular pace ( one to three years, sometimes two summits in a year, with one four-year break – the 5th summit was held in 1978 and the 6th in 1982.