Back to homepage »
Share:
For the 28th anniversary of their establishment, the Croatian Armed Forces prepared demonstration exercise “Jarun 19”, in which the members of the Croatian Army, Croatian Air Force, Special Operations Command and Intelligence Centre demonstrated a joint attack on an opponent to the public 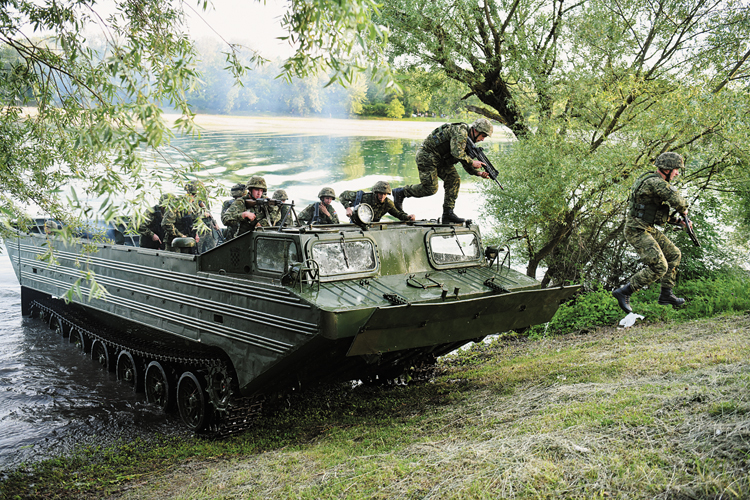 On the occasion of the 28th anniversary of their establishment, the Croatian Armed Forces demonstrated their skills on the grounds of Recreational and Sports Centre Jarun in Zagreb on 26th May. The public had the opportunity to witness gun salutes, parachute jumps, the Honour Guard Battalion’s exhibition drill, demonstration exercise “Jarun 19”, a flight programme by the Croatian Air Force, a performance by Display Team “Wings of Storm” and a static display featuring the Croatian Armed Forces’ weapon and military equipment.

The commemorative programme was attended by the President of the Republic of Croatia and the Commander-in-Chief of the Croatian Armed Forces Kolinda Grabar-Kitarović, Deputy Prime Minister and the Minister of Defence Damir Krstičević, the Chief of the General Staff of the Croatian Armed Forces Mirko Šundov, the United States Ambassador to Croatia W. Robert Kohorst, the Deputy Chairman of the NATO Military Committee (DCMD) Lieutenant General Stephen M. Shepro and many other dignitaries. 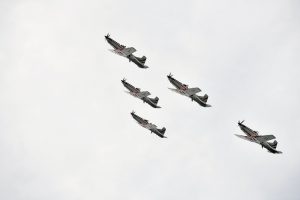 Respects were paid to fallen, deceased and missing Homeland War combatants with a moment of silence and an overflight of two MiG-21 aircraft. Afterwards, the members of the Honour Guard Battalion performed an attractive exhibition drill.

For the 28th anniversary of their establishment, the Croatian Armed Forces prepared demonstration exercise “Jarun 19”, in which the members of the Croatian Army, Croatian Air Force, Special Operations Command and Intelligence Centre demonstrated a joint attack on an opponent to the public. The exercise featured the Orbiter 3 unmanned aerial vehicle, which has been recently introduced into operational service, as well as the Croatian Air Forces’ Pilatus PC-9M aircraft and OH-58D Kiowa Warrior helicopters. The participating soldiers took up roles such as Joint Terminal Attack Controller (JTAC) and Joint Fires Observer (JFO).

The Special Forces Command carried out special reconnaissance and a direct action in all three dimensions of warfare (air, land and sea) using assault rubber boats, combat vehicles and helicopters. The action featured divers, parachute jumps and a demonstration of an airborne exfiltration technique.

An amphibious vehicle and a Patria AMV, supported by helicopters, demonstrated entry into water and a joint operation, while the members of the Guards Armoured Mechanized Brigade’s 2nd Mechanized Battalion conducted an assault landing in PTS amphibious troop carriers belonging to the Croatian Army’s Engineer Regiment.

After the demonstrations, five aircraft belonging to the Croatian Air Force’s Display Team “Wings of Storm” once more thrilled the audience with their attractive display on the sky above Lake Jarun. 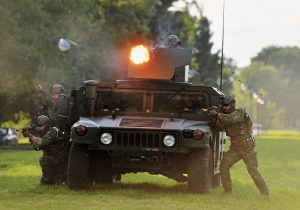 Cadets belonging to the Croatian Defence Academy’s martial arts club “CDA Kickboxing and Grappling” demonstrated various martial arts, including a combination of kickboxing and K1, as well tactical tasks they carried out in summer and winter camps and during the academic year.

The members of the Military Police Regiment simulated detection of explosives with the help of working dogs. Furthermore, working dogs and their handlers presented other aspects of their joint work, such as elements of first-rate obedience, tactical movement in a team, orders, etc. After the end of the commemorative programme, dignitaries were joined by the public on a tour of the static display.

Numerous visitors, including a large number of children, were delighted by the programme and the unique opportunity to become acquainted with the Croatian Armed Forces’ capabilities and weaponry. “It is always nice to see Croatian soldiers among civilians,” said Josip Strinić, who watches the programme on Lake Jarun with his grandchildren every year.

“Sometimes, we tend to forget how strong and capable Croatian soldiers are. Such events give us an opportunity to ascertain that the Croatian Armed Forces keep us safe,” said visitor Sofija Petrić.